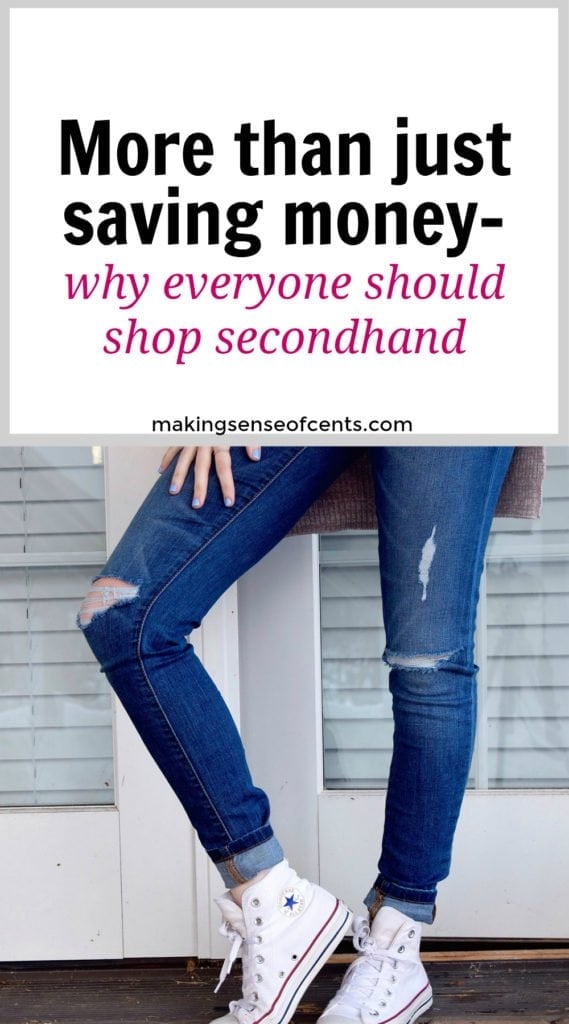 I like thrift stores. I like browsing through lots of different items and trying to find a good deal.

In case you didn’t know, I actually used to work at a secondhand clothing shop called Plato’s Closet, which is a clothing chain that buys and sells gently used clothing for young adults. I worked there for many years, starting as a sales associate and eventually becoming a manager. Due to working for several years at a secondhand shop, I love a good deal, and it’s still hard for me to pay full price for clothing. We saw lots of high-quality clothing and brand name accessories coming in and being sold for a fraction of the price you would see at a traditional retail store.

Buying secondhand doesn’t just save you a ton of money, it prevents waste and lessens the number of things piling up in landfills.

I think we are all aware that we are throwing things into landfills at alarming rates, and shopping secondhand can be one of many ways to make a difference.

However, that’s not how some people see shopping at thrift stores, especially if you have a high income.

I have actually been told that I shouldn’t shop at thrift stores or use discounts (such as coupons), because those are only for “poor people.”

I have been told that by shopping at a thrift store, I am taking items that people with less money could have bought and used.

I’ve also heard that people who shop at thrift stores in order to flip items for a higher profit are “evil.”

Other comments I’ve heard about shopping at thrift stores include (these are all direct quotes):

Personally, I believe that thrift stores and discounts are for anyone to use. Of course, everyone is allowed to have their own opinion, but I would bet that those people don’t really understand the positives of purchasing secondhand or the missions that non-profit secondhand stores have.

As you can see from the tweet below, my question generated a lot of conversation – from both sides even!

ooooh just wrote a really good rant – Should people with high incomes be allowed to shop at resale shops?

Here is why I believe anyone should be allowed to shop at thrift stores.

Everyone is allowed to save money.

Seriously, every single person should be able to save money if they want. Everyone, period.

Do I need to say it again?

People who think that the wealthy shouldn’t be allowed to save money are just nuts in my opinion.

Plus, as you’ll read below, thrift stores serve many other purposes, such as preventing an overwhelming amount of waste clogging landfills and furthering a thrift store’s mission to help charities and their community.

Thrift stores are usually bursting at the seams with new things to put out, meaning there is no shortage of things to buy.

Thrift stores can save a person a lot of money, and who is to say who can and cannot save money?

The wealthy are wealthy for a reason- many of them know how to manage their money correctly. And, this may include shopping at thrift stores and using discounts/coupons. Many look for realistic ways to save money because they don’t like to waste money if they can prevent it.

After all, you’ll never be wealthy if you spend it all.

There are many ways to save money and grow your wealth, and shopping secondhand can be a small step in gaining financial freedom.

Related content: Why You Should Spend Like A Millionaire- The Frugal and Smart Money Habits of Millionaires 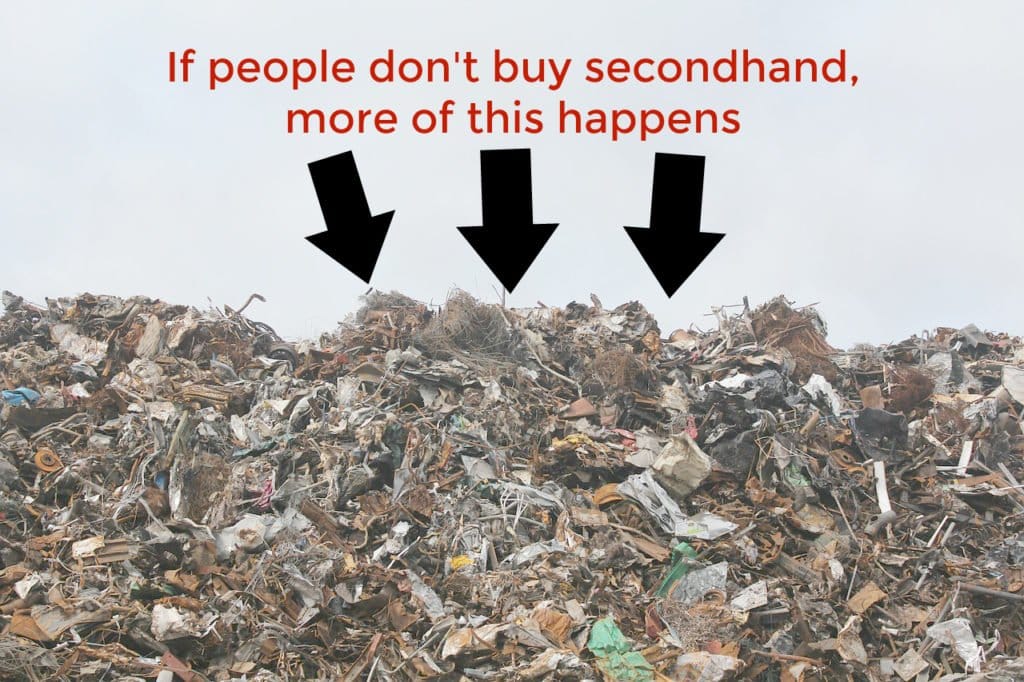 Thrift stores usually have an overwhelming number of things. It’s not like you are going to buy 100% of the items in the store – they have thousands upon thousands of items to sell.

When you purchase something secondhand, you are keeping one more item out of a landfill.

According to the Environmental Protection Agency, 15.1 million tons of textile waste was product in 2013, with around 85% of that going to landfills.

And, according to the Huffington Post, Americans, on average, throw away 70 pounds of clothing each year.

According to Down To Earth Materials, the estimated decomposition time for clothing and other items are:

As you can see, the clothing we wear and other household items we use can have a big environmental impact. By purchasing secondhand clothing and items, we can lower the amount of waste we put into landfills and help the environment well into the future.

With more people shopping at thrift stores, there are even more items that are getting a second “life” and even fewer items ending up in landfills.

Can you just imagine how crazy landfills would be if certain people weren’t allowed to shop at thrift stores? There would be so much trash everywhere!

Related: How Thrift Store Reselling Is Good For The Environment And How To Do It

There’s enough for everyone at a thrift store.

For the most part, buying a t-shirt at Goodwill or Salvation Army isn’t going to negatively impact anyone – they have plenty of everything there. In some places, they are actually turning away donations because they have TOO MUCH STUFF.

Most of the things that are sold at thrift shops aren’t going to be life or death for anyone – it’s just stuff, which may be hard for many people to realize now, but it is the truth.

There is plenty for everyone and thrift stores won’t be running out of basic household items and clothing anytime soon.

So, the belief that “rich people are taking away items from the less fortunate” is not realistic – because there’s plenty of stuff for everyone. Like I said, thrift stores are bursting with so much stuff that they are turning donations away!

Your money is helping the thrift store’s mission.

Thrift stores like Goodwill and Salvation Army exist so that they can make money and put that money towards the charities they support.

So, more people shopping at these thrift stores can help further their mission of helping the community.

For example, with the money Goodwill makes through selling items at its stores and through donations, they were able to place more than 313,000 people into employment in just 2016. It’s possible that if you took away some of their customer base, they may not have been able to help as many people. They even state on their website:

“When you donate your new and gently used items to Goodwill®, we sell them in our stores or on our online auction site and use the revenue generated to fund valuable employment training and job placement services for people in your community.”

For many non-profit thrift stores, their mission actually isn’t to solely sell clothes at low prices. Instead, their mission is to further improve the community and the people in it. To do that, they need funds, and they raise funds by selling donated items.

So, the more people who shop at these stores (including people who can afford regularly priced stuff) actually help them further their mission.

So, what do you think? Do you think that thrift stores and discounts shouldn’t be used by people who can afford otherwise?