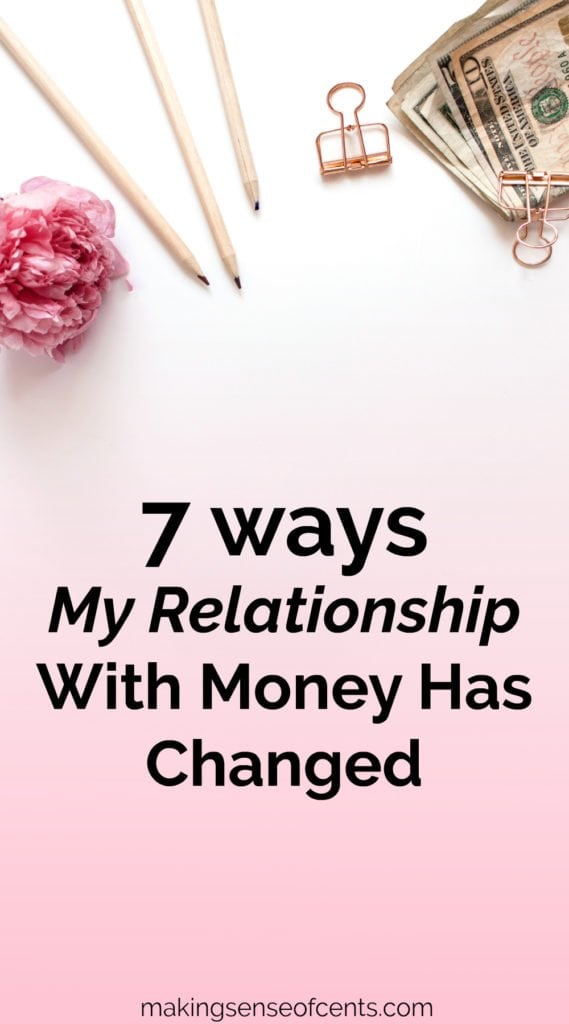 It’s crazy to think about how much my life and my relationship with money has changed in just a short amount of time.

I still remember, quite vividly, struggling with money and living paycheck to paycheck. I remember thinking about how $25 could completely break me, crying over dropping food because I was so stressed out and every dollar mattered, and more.

And, it wasn’t just that I didn’t properly manage my money, I also had an unhealthy relationship with money.

I still have a lot more room to grow, but I do think that my relationship with money has greatly improved over the years. And, it can only get better from here.

It’s not just because I’m earning more now than I used to. I’ve learned a lot about myself over the years, and I’ve also learned more about money, which has helped empower me.

Here’s how my relationship with money has improved over the years:

1. I stopped caring about others’ opinions of me.

I spent a lot of money when I was younger because I cared about what others thought of me. I don’t even think I realized how much I let what other people might think of me control the way I spent money. It’s possibly what led me to spend so much money on clothes, on a new car, going to an expensive private university (when I should have just started with community college), and more.

Now, I don’t care what people think of me.

I don’t care if I have holes in my clothes, if I wear the same outfit over and over again, that 50% of the population thinks I’m crazy for living in an RV, and so on.

This has not only saved me money, but I’ve also saved a lot of time and energy.

People take part in emotional spending for many different reasons. You may have had a bad day at work, a fight with your loved one, and so on. You might even be spending because you are so stressed out about the amount of credit card debt you have racked up. And while that’s an illogical reason to spend more money, a lot of us still do it.

While a certain level of emotional spending may be acceptable in some cases, it can quickly get out of hand and turn into a problem.

And, I know this, because I used to go emotional shopping all the time!

I would think that I deserved it for working hard, because I was having a bad day at work, because I thought I was doing “good”, and more. Seriously, there were so many reasons, and it didn’t matter if it was a good day or a bad day because I would use either as an excuse to shop.

It’s funny how I used to be with money because as you’ll see below in #3, I either spent waaaaaay too much, or I didn’t spend anything at all. I really had such a unhealthy relationship with money.

Knowing where your money is going is great, and more people should start doing this.

However, I used to take it to the extreme. I would think about every last dollar I would spend, and it was hard for me to enjoy spending any money, no matter how much money I made or if I had the money set aside for a specific purpose.

And, yes, money can make or break you, but it is also there to be enjoyed and to use to your advantage.

Once you are on a good financial path and have budgeted money for fun, you should be able to enjoy the money you are spending instead of feeling guilty or upset.

When I was 18, I bought a brand new car. It was over $20,000, and I thought I looked so cool. The reality is that I probably looked really dumb!

My monthly car payment was around $400, and I was also spending a lot of money on car insurance, gas, tinting the windows (ugh!), and more.

And, I had a job that only paid a few dollars over minimum wage.

What was I thinking?!

5. I no longer think debt should be normal.

Many people compare their amount of debt to what others have so that they will feel their debt is “normal.”

I was guilty of this too. I thought that since almost everyone seemed to have student loans, that it would be fine if I did too.

So, I took out a lot in student loans instead of using the full-time job I had to help pay for tuition, which probably would have been a much better use than that car.

However, who cares how much debt another person has? How exactly does knowing what the average amount of debt a random person has affect you?

Is that person you?

So, why would another person’s amount of debt even matter to you? That makes no sense!

Just because someone else has $10,000 worth of credit card debt from buying too many clothes does not mean that you should too. You never know, this amount may be breaking them on the inside even if they aren’t showing it.

I’m still not entirely perfect in this area, as I still save like crazy in fear of a rainy day.

However, I don’t let money control me as much as it used to.

Before, money controlled my life to the point that I would think about it before even thinking about my health.

If I would have just learned how to manage my money better, I wouldn’t have let money control my life as much as it did.

I would calculate our finances every day, stress out about little purchases, ignore learning about money, I would worry about keeping up with my income reports (they are super motivational, but I also felt like I had to “beat” them every month), I had a super large emergency fund (my money could have been better invested that whole time!), I would always worry about repairs to the house, car, or RV instead of just living a normal life, and more.

I would obsess about money to the point that I didn’t actually enjoy life. I kept thinking about what bad things could happen, comparing myself to others, and more, instead of just enjoying life.

7. I’ve learned that life is about much more than just money.

One thing that goes along with everything else above, is that I have learned that life isn’t all about money. When I was younger, I had dreams of making lots of money, living in a big house, and having nice cars.

Now, I really don’t care about any of that. As long as I am financially independent, I am happy, but there is more to life than just money.

For me, I am happy traveling to new places, being able to spend time with family and friends, personally growing, trying new things, and so on.

Now, I am much more interested in experiencing life.

This doesn’t mean you should throw everything I’ve taught you about money here on Making Sense of Cents out the door. It’s all about having a healthy balance.

And that’s what I’m always working towards.

How has your relationship with money changed over the years? Have you gotten better or worse with money?