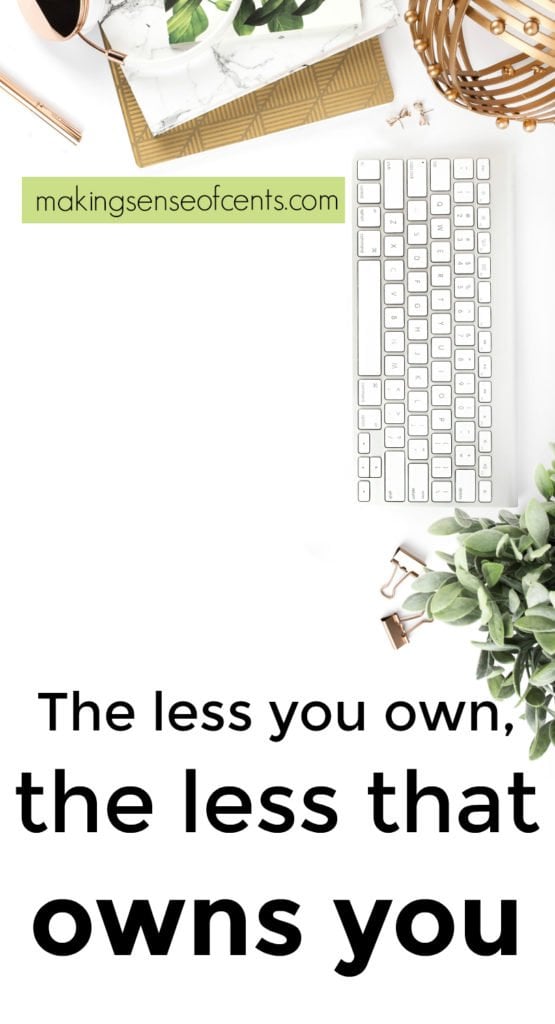 I hoarded lots of items, hoping that one day I would find a use for them. I often thought that I needed things, so I would purchase crazy amounts of them even though I should have put my money to better use.

Then, around two years ago, I realized that I had too much stuff and that I had an unhealthy relationship with material things.

Over the past two years, I have donated or given away the majority of my belongings. I now pretty much only have the things I need to get me through the day or week ahead. There is no extra, and before I purchase anything, I always think about what use I’ll get out of it.

After all, I travel full-time and there’s only so much I can carry. Plus, getting rid of the majority of my belongings has been hard, stressful, and tiring, and I definitely don’t want to experience that ever again!

I know that not everyone wants to be a minimalist. And, I’m not pushing it on anyone. I know that buying stuff isn’t all bad, and there are many material things that make life easier and better.

Instead, I want to introduce people to the idea of minimalist living, especially since the average person has lots of extra stuff in their lives that they don’t need. This can lead to debt, buying things just to impress others, wasting time, and so on.

Plus, being a minimalist has changed my life for the better, and I believe that it can help others as well.

I used to spend a lot of time thinking the things I bought and spending all of my money on new things, but I am far from that now.

Clearly, we used to make due with less, and there are still many reasons for minimalist living:

Here is how minimalist living has changed my life:

In fact, I hardly ever purchase clothing, and I’ve been wearing nearly the same things for several years.

For me, it’s all about buying things that are more “classic,” won’t go out of style, things that I actually like instead of what’s trendy for that month, and so on.

It feels great when you realize that you don’t need all of that extra stuff in your life.

Instead, purchase what you want and need, rather than thinking about keeping up with others all the time or thinking that emotional spending is something that will help you.

Minimalist living allows me to have more time to spend on other things.

Just think about it: The more things you have, then the more time you have to spend on using it, maintaining it, repairing it, cleaning it, and so on.

I would much rather live with less than think about all of the things that I own that need work done to them!

With minimalist living, I’ve realized that I don’t need much.

Before I was a minimalist, I kept a lot of things because I thought I needed them for the future. On a regular basis, I probably only used around 25% of the things I had in my house.

In reality, it was probably even less than the 25% figure that I just said above.

I know I’m not alone, and many people keep items because they think they might need them in the future. You know the feeling– you buy something, don’t use it right away, and years later you find it but just can’t throw it away in case there is some circumstance where you need that exact item.

If this is you, then you should put a timeline of no more than one year on the item. If you don’t use it in that timeframe, then there’s a big chance that you’ll never need it or will even miss it that much.

Instead of buying items that you rarely use, you may want to think about renting or borrowing them from someone else.

I save more money by living with less stuff.

Now that we live with less stuff, we are able to save a great deal of money. Instead of thinking that we need everything that exists, we are now much more realistic about our needs and realize that there’s a lot of clutter in the stores that no one really needs at all.

Plus, now that I realize how much money I’ve wasted over the years, I am able to say “no” at the store when debating about whether or not I should purchase a certain item, especially one that might create clutter.

I have so much more control over my spending and that has saved me a lot of money.

I understand now that I don’t need things to make me happy.

In fact, in many circumstances it’s far from that.

Plus, when was the last time you heard someone say “I’m so glad I bought all those pairs of pants 35 years ago!” or “I’m so glad I had all of those things decades ago!”

You should only own something if you truly want or need it. Who cares about what everyone else has!

A minimalist house allows me to travel.

Unless I maintain my minimalist lifestyle and house (well, RV), then I wouldn’t be able to travel full-time. It would be quite hard and not nearly as enjoyable if I had a bunch of things holding me back.

I really, really love and enjoy being able to travel full-time, and it is one of the best benefits of living minimally.

Do you think minimalist living could change your life? Why or why not?