As a personal finance expert, I always come across spending statistics that surprise me, make me sad, and some that make me worried. 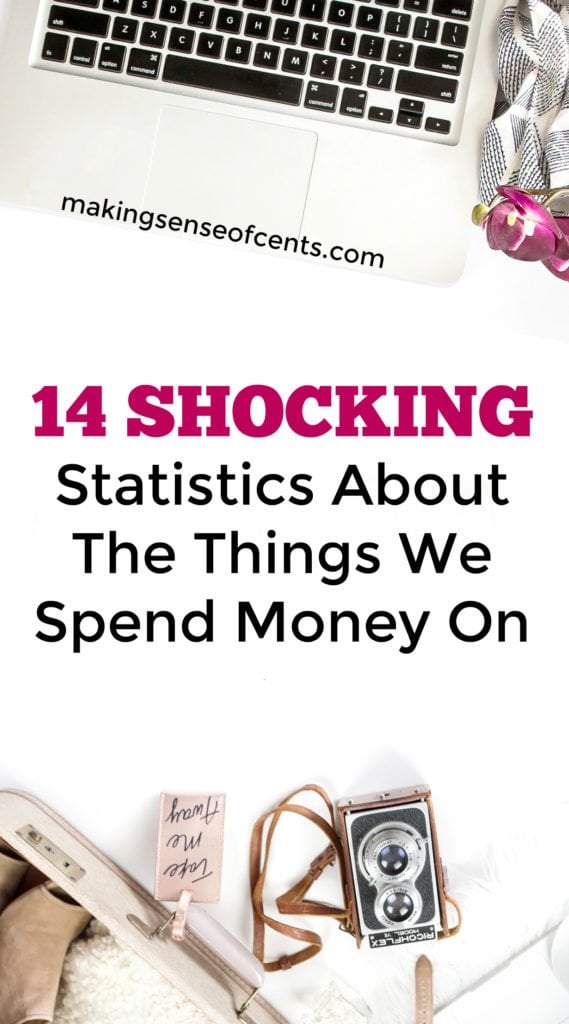 The statistics in this blog post are about the things people spend money, and they may surprise you. But, I want you to be aware of them so that you can be better than “normal.”

Maybe you will find them so shocking that you will think twice before you buy something, or they may even cause you to drastically change how you spend money.

I do also want to mention that even if you are doing better than the average person, there is always room for improvement.

You should always strive to do your best as sometimes “average” is not good enough for you to live a financially successful life. Keep in mind that the average person is not the greatest with money, and many are wrecked with stress and hardship due to their unfortunate financial situation.

Below are some money and minimalism statistics that will hopefully get you into financial shape.

1. Women are 27% more likely than men to have no retirement savings.

I found this statistic on Go Banking Rates.

To change this money statistic, please read The Smart Woman’s Guide To Investing Success. Here’s a quick snippet from that blog post:

“Women face different obstacles than men do when it comes to investing in the stock market. Right off the bat, they tend to have less in savings because women often take time off to raise children. With years of not earning a salary, there is no money being saved and compounded upon.

In addition to this, women typically outlive men by close to 10 years on average. Therefore, it is important as a woman to invest in the stock market.”

Yes, you probably have around 300,000 items in your home, maybe even more.

Count all the utensils, pens, random papers, clothing items, socks, items in your attic or closet, and I’m sure you’ll see that it quickly adds up.

That is a lot of clutter that can clog a person’s mind!

If 300,000 items wasn’t enough to shock you, don’t worry, many people also rent a self-storage unit.

We had a storage unit for around six months when we first started RVing, but we quickly got rid of it when we realized that spending over $2,000 a year on stuff that we weren’t using was a waste of money.

To add to all of this, the people with the largest car loans actually have the worst credit scores.

Another car loan statistic, the average monthly payment for a new car loan is $471 and $352 for a used car loan.

Shocked by any of these car loan statistics?!

According to a survey done by CNN, 68% of Americans surveyed live paycheck to paycheck. According to their survey, these households have less than $800 to cover them until their next paycheck.

If you are living paycheck to paycheck, I urge you to try and find a way to immediately get out of this bad situation. Having money set aside as a buffer can greatly help you in times when you need it.

6. Annually, an average of $220 per person is spent on the lottery.

However, in states such as Rhode Island, it’s way above $220, at nearly $800 per person spent on the lottery on an annual basis.

That is a ton of money spent on the lottery.

7. The average person spends 12 days per year looking for things they can’t find.

And, every day the average office worker spends 1.5 hours looking for things! Often, an easy solution, like a simple filing system, would solve this problem.

Plus, 55% of consumers stated they would save anywhere from 16 to 60 minutes a day if they were organized, and 23% of people pay bills late and have to pay late fees because they are unable to find their bills.

According to a survey by Bankrate, 26% of survey takers had no emergency savings whatsoever, only 37% of Americans have enough savings to pay for a $500 or $1,000 emergency, and 24% had less than three months worth of living expenses set aside.

What I was happy to read, though, was that 23% had six months or more in their emergency fund, which is actually a much higher percentage than what I thought it would be.

How much a person needs in their emergency fund can vary greatly, but I tend to think that six months of expenses or more is a good number. I like to be comfortable, but that number can vary, especially if you have high interest rate debt that you are trying to pay off or if you have an unstable income.

Related article: Everything You Need To Know About Emergency Funds.

9. In the last few decades, the average home has nearly tripled in size.

There are many benefits to downsizing your home. You can possibly save more money, have less clutter, spend less time on maintenance, and more.

If you’re interested in downsizing your home and/or becoming a minimalist, I recommend reading the blog posts below.

According to a survey done by Daily News, on average, women spend 399 hours shopping a year. This annual total includes around 300 trips for food, clothes, books, and more. And, if you add it all up over the course of a lifetime, it adds up to over eight years spent shopping!

According to the Federal Reserve, the average person is not saving for retirement.

The amount above only counts people who are actually saving for retirement, and that is for all age groups. $60,000 won’t get you far, so this is a very alarming statistic.

Keep in mind that these statistics only count people who have actually saved anything for retirement.

According to US News, 45% of households do not have anything saved for retirement. This means that once you account for these households, the numbers above decrease dramatically.

Related article: Why You Should Invest and Save For Retirement – Plus a Personal Finance Confession Fail.

According to NerdWallet, the average household has $7,283 in credit card debt. However, if you only count households that have credit card debt in the first place, that number jumps to $15,611.

And, if you add up all of that credit card debt, it equals nearly $883 BILLION.

That is a lot of credit card debt. Credit card debt can be due to many different reasons, including living paycheck to paycheck, emotional spending, and more.

Related article: How To Eliminate Your Debt.

If you have a gym membership, I highly recommend that you figure out whether or not it is worthwhile. According to Statistic Brain, the average monthly cost of a gym membership is $58. Yet, 67% of people never use their gym memberships.

That is a ton of wasted money.

That is a ton of money. I had almost $40,000 in student loan debt when I graduated, and I still believe that a lot of that had to do with me thinking that this was “average” and that if everyone else had the same amount of student loan debt as me that it wasn’t that big of a deal.

Boy, was I wrong. When I received my first student loan bill after I graduated, I knew I wanted to pay off my debt quickly because having such a huge amount lingering over my head gave me a headache.

What money or minimalism statistic above shocked you?