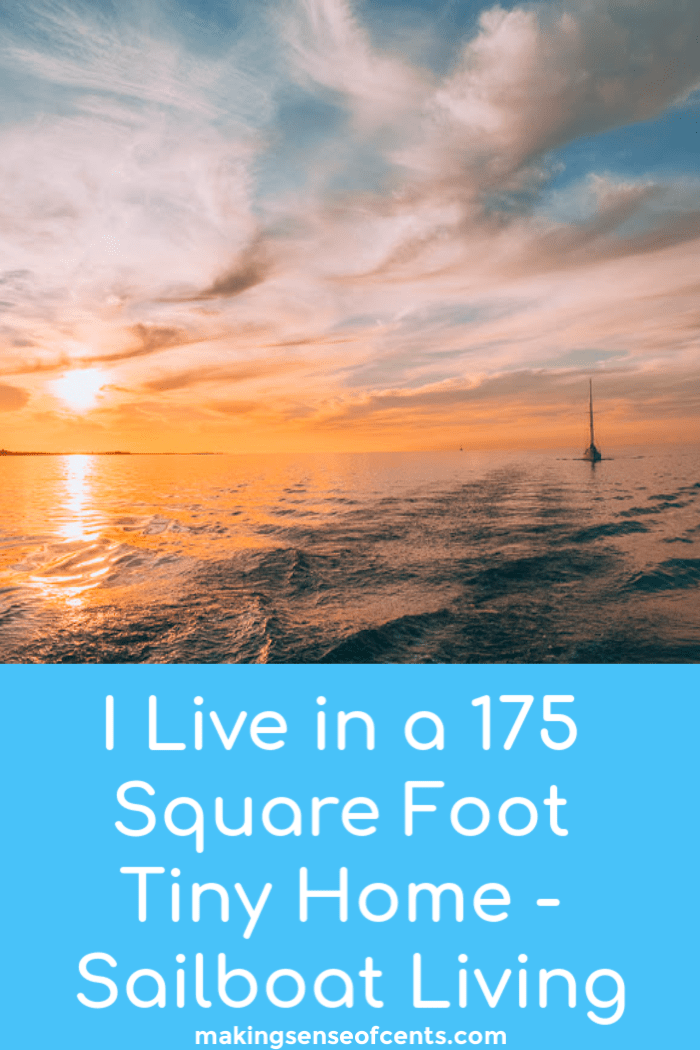 I was able to interview the amazing Melody at Saving To Sail. She lives on a 175 square foot “tiny home” sailboat with her significant other and their 50 pound dog. It’s definitely a great read about living on a sailboat. Enjoy!

Hi, my name is Melody and I live on a sailboat.

Wow, that sounds like an introduction at a group therapy session! I’m sure some people secretly think to themselves that I need therapy once they learn that I, along with my significant other Chris and our 50lb Dutch Shepherd, have less than 175 square feet in our boat cabin!

Why did you move onto a sailboat and decide to start living on a sailboat?

We came to the decision to sell our 950 square foot house in Nashville (and most of the things that filled it) around 2011. Chris was a singer/songwriter and he hit a rough spot creatively.

I was complacent with my job and our daily routine, so we decided to shake things up and move onto a sailboat. We were both avid sailors, and it was one of the few ways that we thought we could see so many places, so we decided to take the leap and do it sooner than later.

We listed the house and as soon as it sold, we bought a 35 foot sailboat and promptly sailed it from Panama City, FL to the Keys, then up the East Coast and the Chesapeake Bay.

Since then, we’ve cruised up and down the East Coast 4 times, staying in bigger cities like Charleston, Fort Lauderdale and St. Augustine, as well as tiny, quaint towns you’ve likely never heard of such as Rock Hall, Solomons Island and Oriental, each with it’s own charm, and each one now home to us in some way, if only for a short time. 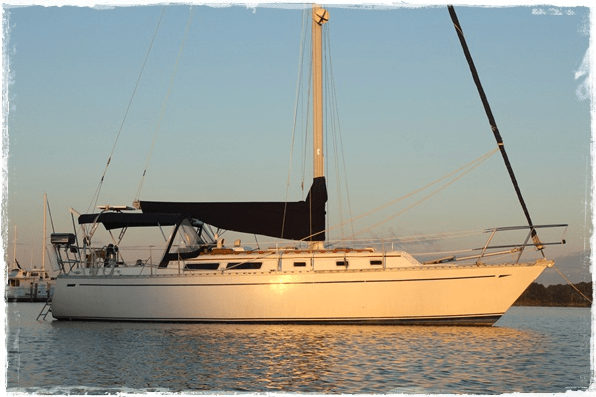 How was it to downsize to start living on a small sailboat, and join the tiny house movement?

The downsizing in the beginning was pretty difficult, I must admit.

While I was not materialistic, we did each have a lifetime each of stuff we had acquired, and thus, had to get rid of. I also had a closet full of shoes.

Girls, you can understand how hard getting rid of them all was for me.

The funny thing about us humans is how easily we attach emotions to inanimate objects. Of course some things are understandable, such as a quilt hand-stitched by my Grama, but there were some things I was so hesitant to get rid of, although they had zero sentimental value to them. I felt like I was giving away huge chunks of my life as I filled box after box with my things.

As the process went on, however, I found that I was actually enjoying getting rid of my belongings.

As I designated each item as trash, donate or keep, it was fun to reflect and laugh at some of the old photos and memories. The process became cathartic and when it was all said and done, I felt like a huge weight had been lifted. I felt so free! 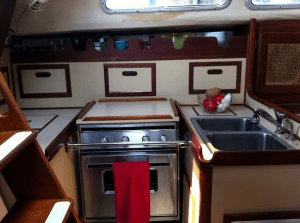 What do you do for food when living on a sailboat?

One funny thing about living on a sailboat is that people ask you some really ridiculous questions. Oddly enough, the most common question we get is, “What do you do for food?”

Seriously though, we do go to the grocery store like normal people, and we cook on board most nights although we do like to find a few local restaurants when we get to a new town.

We’ll sit at the bar and eat and have a beer or a glass or two of wine. We’ve found that this is one of the best ways to spark up a conversation with a local who gives you all the scoop on the town, and we’ve made lots of new friends this way. I’d like to say we fish a lot, but we are terrible fishermen, but I finally caught my first fish last weekend! It was awesome.

What about privacy since you’re in such a small space?

There is a certain lack of privacy that comes with the territory, and I would say that many couples I know wouldn’t be able to get along in such confinement.

You can’t get your feelings hurt when you’re in this situation and your partner admits they need space.

It’s not personal – we all need “me time”, and luckily, we both understand that. When those times come, one of us will take the dog for a walk, or someone will go up on deck to read so the other can have some alone time.

It’s also crucial to have excellent communication when you both live in such a small space.

Even though our actual living space is tinier than even most tiny houses, it’s all relative, I suppose. Since we have less stuff, our space doesn’t feel cramped in the least. I think if we were pack rats, I would be absolutely miserable but as it is, I wouldn’t trade it for anything. If we need more room, we go up on deck, where we are treated to million dollar views and sunsets that take your breath away. It’s a good life.

What about money when living on a sailboat?

The hardest part for me is work when living on a sailboat, and worrying about money. I’m in my 30’s and Chris in his 40’s so we’re on the younger side of retirement.

I’m lucky, because the promotional marketing company I work for lets me work remotely from the boat. I have a Verizon Jetpack mobile wifi device that keeps me connected, and since most of my work is done via email and phone, it’s not too difficult – logistically, of course.

However, I will admit that it’s tough to be in some of these wonderful places and still be tied to a computer each day for 8 solid hours. My need to be constantly connected has also kept us from sailing to further places such as the Bahamas or Nova Scotia, so while having a steady income is awesome, it’s not without its downfall.

This is the reason I actually became such a huge fan of Michelle’s blog and the whole side hustle thing! I’ve learned so much from Making Sense of Cents, and I now have a few side hustles – writing, making jewelry and website building, and Chris wrote a book about our transition, so he gets royalties from that and from his music.

One of these days, I hope to do what Michelle has done and break free from the standard 9-5 as I know it and work strictly for myself, on my own schedule, so I can better enjoy this wonderful little life we have created for ourselves.

Melody is the author of the blog Saving To Sail, and makes nautical jewelry which she sells in her online shop, Maggie & Milly. Chris DiCroce is a singer/songwriter and is working on his 4th album. He is also the author of the book You Gotta Go To Know, available on Amazon.

Could you live in a tiny home? What about living on a sailboat? What would be your DREAM living situation?

If you have any questions for this couple about living on a sailboat or something related to that, leave them in the comments below. They will be replying to comments 🙂