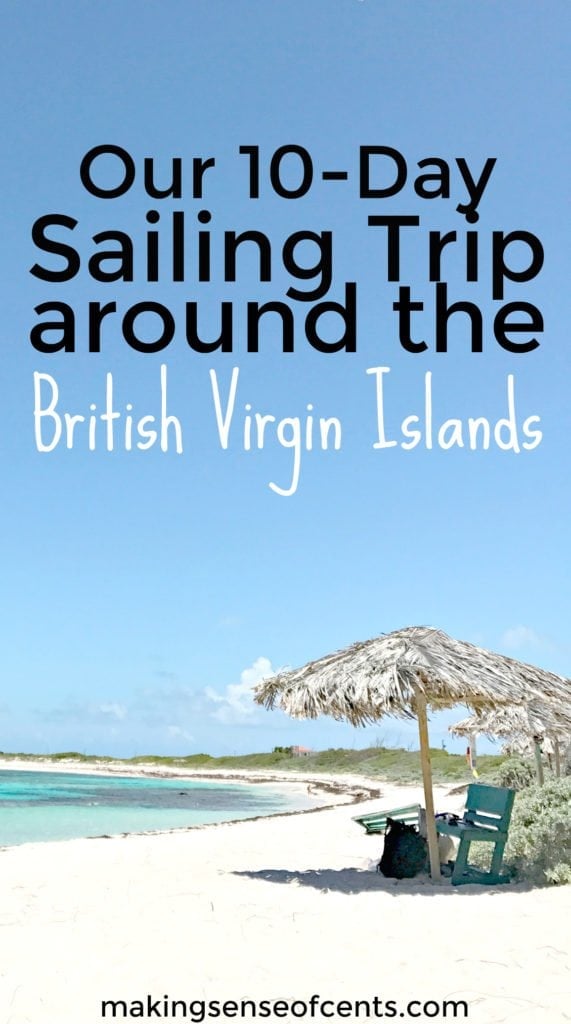 Because of RVing, we made a new friend around 1.5 years ago. Like us, he RVs full-time, but he used to live on a sailboat. After months of talking about it, we finally decided that we would go on a sailing trip together. Me and Wes knew that sailing would eventually be our next adventure, so this seemed like a fun vacation to help us decide if we would really enjoy it.

So, in June of 2017, we took a 10-day sailing charter in the British Virgin Islands with our RV friend and two other couples.

This ended up being one of the best trips I’ve ever taken. Plus, I was still able to earn a great income even though we were sailing and on vacation for the majority of the month as you can read in How I Made $121,861.28 In June While Sailing to Beautiful Islands.

Actually, I had never even been on a sailboat before.

Here are some of the places we went on the sailing charter (pictures are at the very end of the article):

We were on a Sunsail 51 – 4 Cabin Monohull Yacht, and some people might think that’s crazy for seven adults. However, no one complained about the space, and it really ended up being plenty of space for our group. 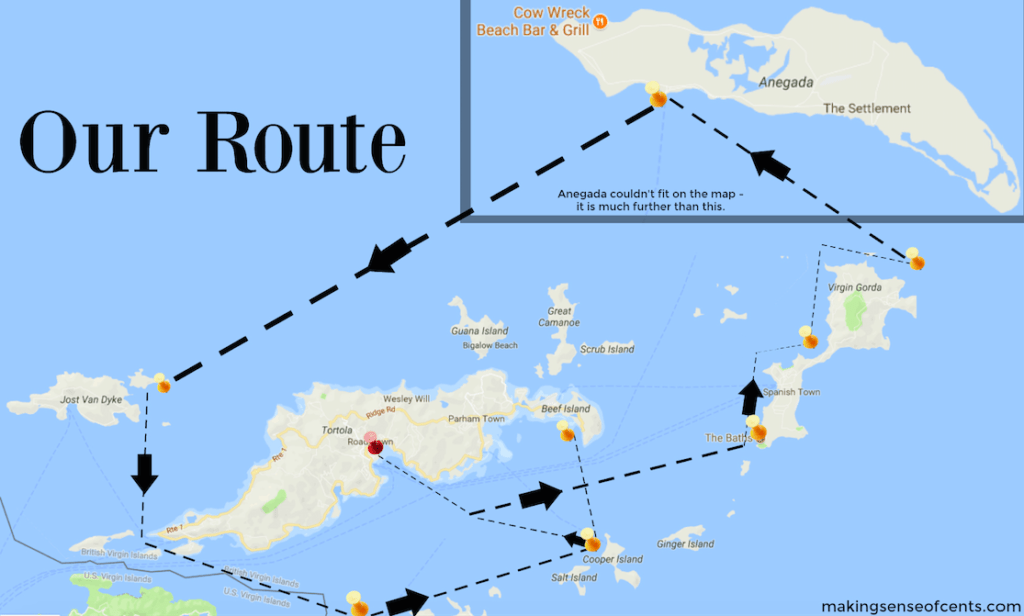 (I’m not a graphic designer as you can see from this image, haha)

Getting to the sailing charter.

Because St. Thomas is the largest and usually the easiest airport to fly into, most people tend to fly to St. Thomas in the U.S. Virgin Islands and then take a ferry to Tortola, where Sunsail and other charter companies are located.

Our trip actually started by first flying from Portland (that’s where we left our RV) to Dallas, then to Miami, then to St. Thomas.

After arriving at the STT airport, we took a five minute taxi ride for about $10 (for the both of us) to the Charlotte Amelie ferry dock. We then hopped on the Road Town Fast Ferry to go from St. Thomas to West End, Tortola. This took around 45 minutes and cost about $100 for the two of us. You can find ferry information here.

After we arrived and went through customs to clear into the British Virgin Islands, our Airbnb host picked us up from the ferry dock because the driveway to her Airbnbs was incredibly narrow, steep, had very sharp turns, and most taxis could not do it. We completely understood when we arrived!

We stayed at the Airbnb for a few nights (it had AMAZING views), waited for some of our friends to arrive, then headed over to Sunsail, where we would bareboat charter a sailboat. 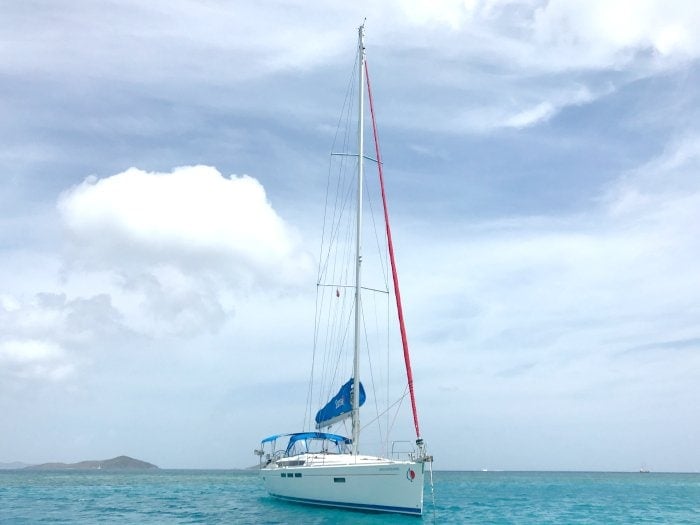 This was our sailboat – Annie Daydreaming.

As I said earlier, we were on a Sunsail 51 – 4 Cabin Monohull Yacht. Sunsail is one of the biggest sailboat rental companies in the world, with locations all over.

This was a Jeanneau sailboat, around 50 feet with four bedrooms and four bathrooms.

While all of the cabins were on the smaller side, everyone was able to sleep and have their own space, which was nice. We didn’t have to refill the water tank the whole 10 days, we had plenty of diesel to run the ACs at night time (it’s hot in June in the Virgin Islands), and we had plenty of space for food.

Who sails the sailboat?

Like I said at the beginning of this post, our RV friend used to live on a sailboat, so we made him our captain. This meant we were able to bareboat charter our sailboat, and sail on our own.

Wes also took on some of the sailing responsibilities because he has taken an 8-day sailing course and has also sailed with his uncles a few times.

So, the rest of us put our lives in their hands, and it went well!

If you are interested in a sailing charter, but you don’t know anyone who sails, Sunsail (the sailboat charter company that we used) will provide a captain for your trip for an additional cost. 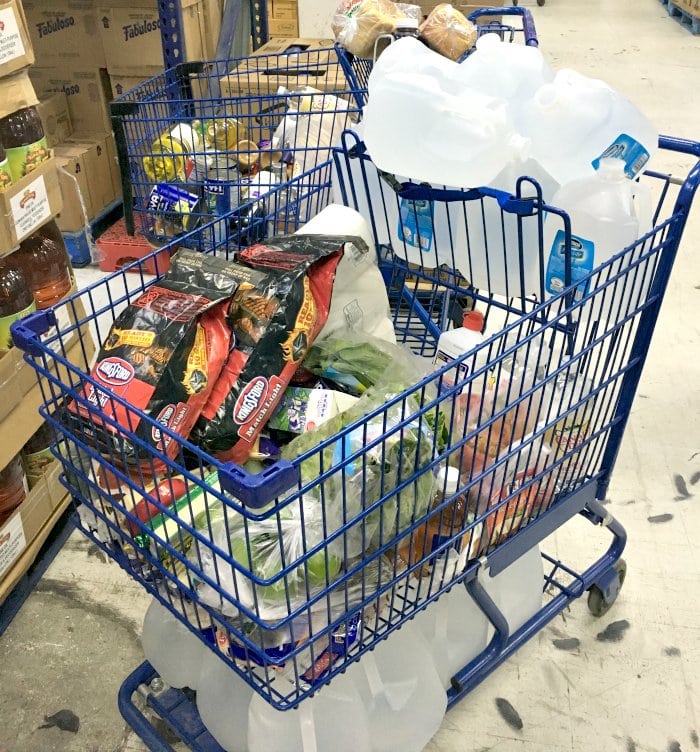 We provisioned beforehand and bought a TON of food and drinks.

What did we eat on the sailing charter?

The day we got the sailboat, we spent some time getting provisions for the trip. It took a few hours and a couple of grocery stores. We went to the Rite Way in Road Town as well as OneMart Superstore.

Rite Way was more comparable to a grocery store in the United States, with many of the same food and displays I am used to seeing in the states.

We could have spent way, way, way less money on food, but we splurged on a few experiences, such as going to Saba Rock and having two lobster dinners in Anegada. We also overprovisioned and ended up giving away a ton of food and alcohol to another group who were about to start their chartered vacation. Honestly, our best meals were actually on the boat, as we had many great cooks (this goes to you, Scott and Nicole!). 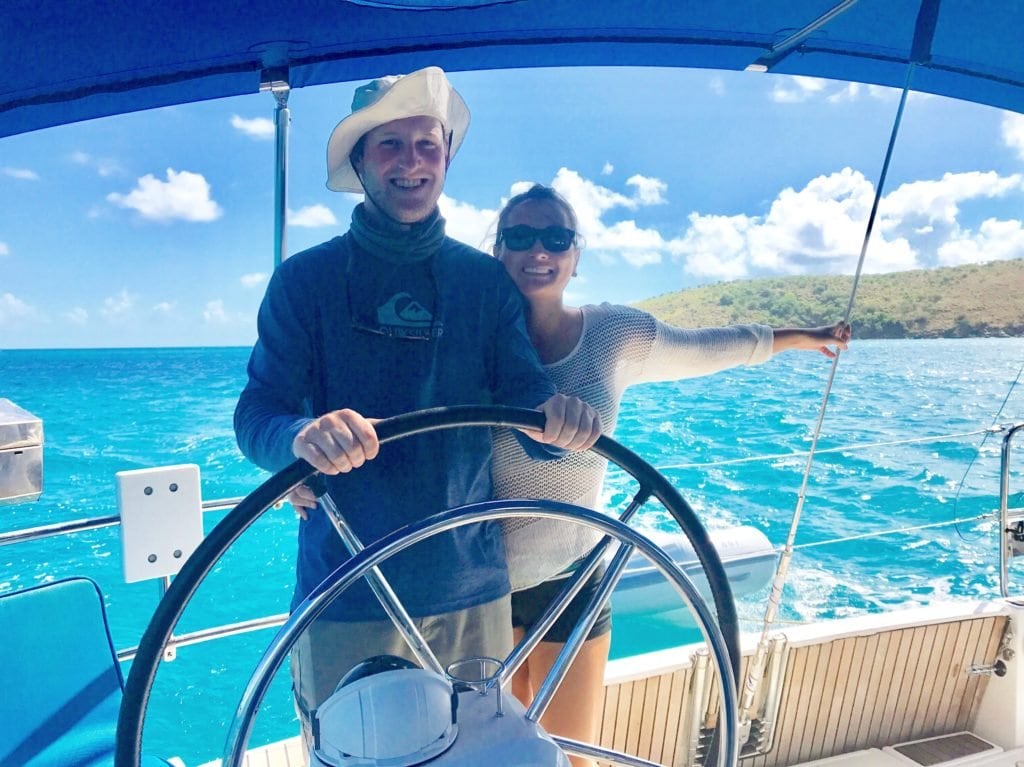 Did I get seasick on the bareboat charter?

I have a stomach that gets upset quite easily. I don’t get sick in the RV, but oddly enough, I do get carsick whenever someone other than me or Wes drives.

Much to my surprise, I didn’t get sick at all during the 10-day trip. Actually, many of the people on our trip got seasick, so I was really surprised when I didn’t.

If you normally get seasick, there are many things you can do to try to prevent it, such as taking Dramamine or Bonine, wearing a sailing bracelet, getting a seasickness patch, and so on. People on our sailing charter tried a combination of all of these. 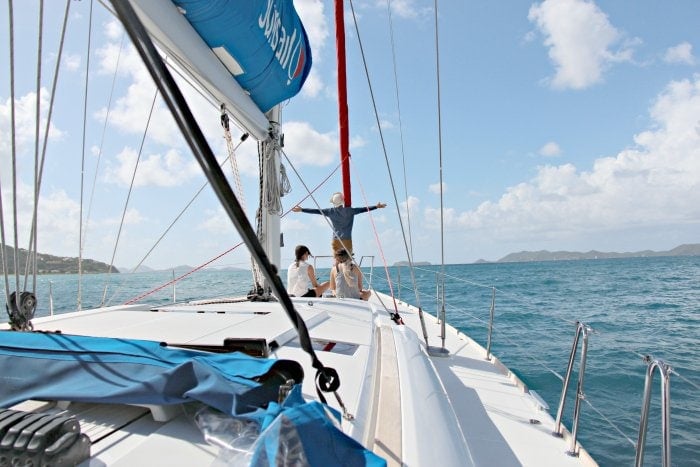 This picture was taken just moments after getting the sailboat charter.

What did I love about the BVI sailing trip?

I loved everything about the sailing trip. Honestly, I could have spent the entire 10 days just on the boat. However, the British Virgin Islands are beautiful and deserve to be explored.

I know I keep saying it, but really, everything was amazing. I definitely recommend going on a BVI sailing charter trip of your own.

Here are my other tips for your sailing charter in the British Virgin Islands:

Most of all, be polite and have fun on your sailing charter in the British Virgin Islands!

Well, there you have it! This was really one of the best trips I have ever taken, and writing this trip recap and review has made me a little emotional thinking about all the fun we had.

Are you interested in going on a sailing charter in the British Virgin Islands or somewhere else in the world? Why or why not?

Here are some pictures from our sailing charter in the British Virgin Islands. Some of the pictures are from our friends who were on the sailboat rental with us, such as Jake and Liz. 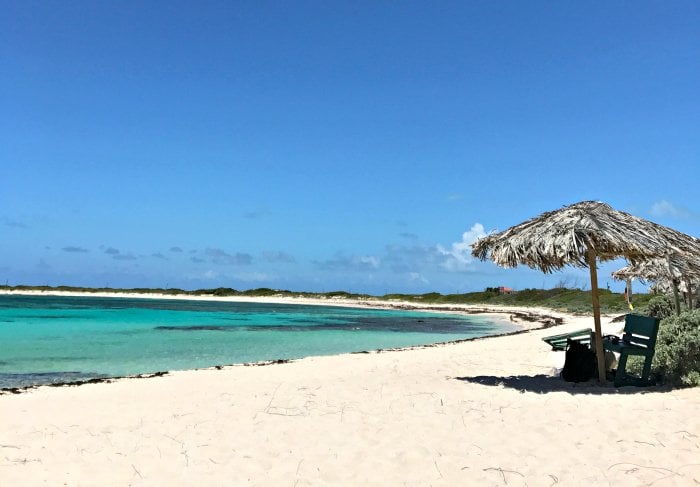 Loblolly Beach on the island of Anegada. 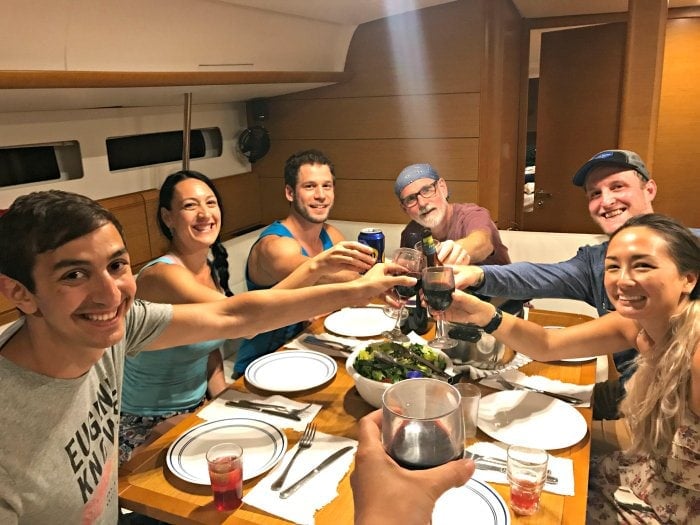 Eating dinner on the sailboat. 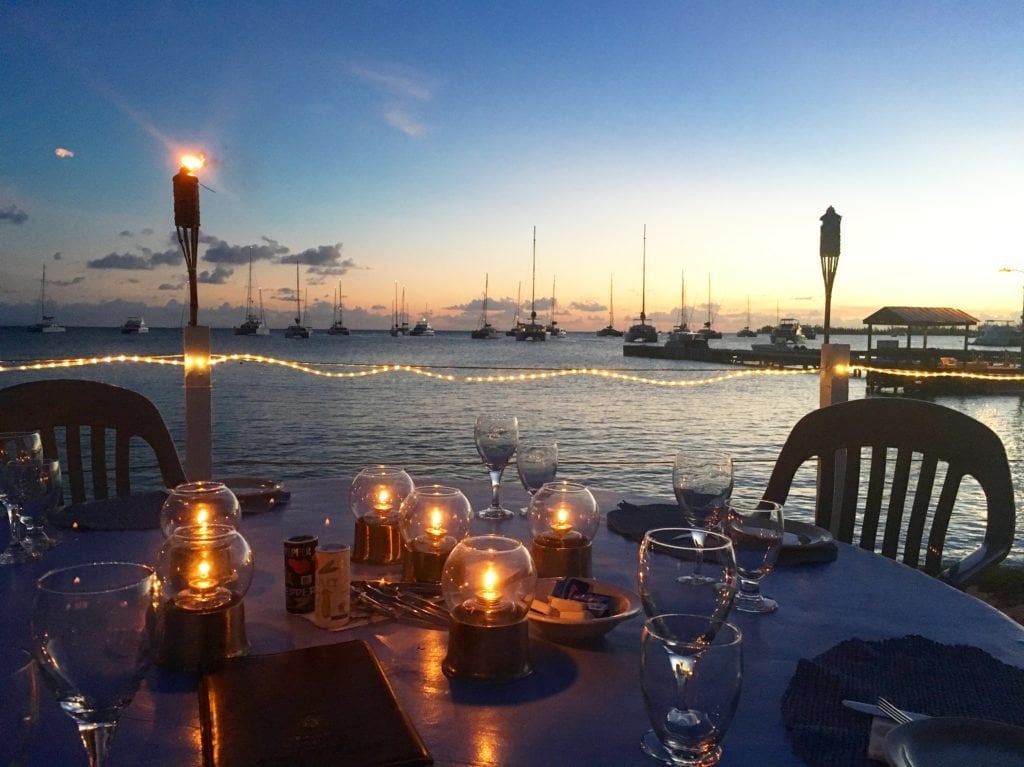 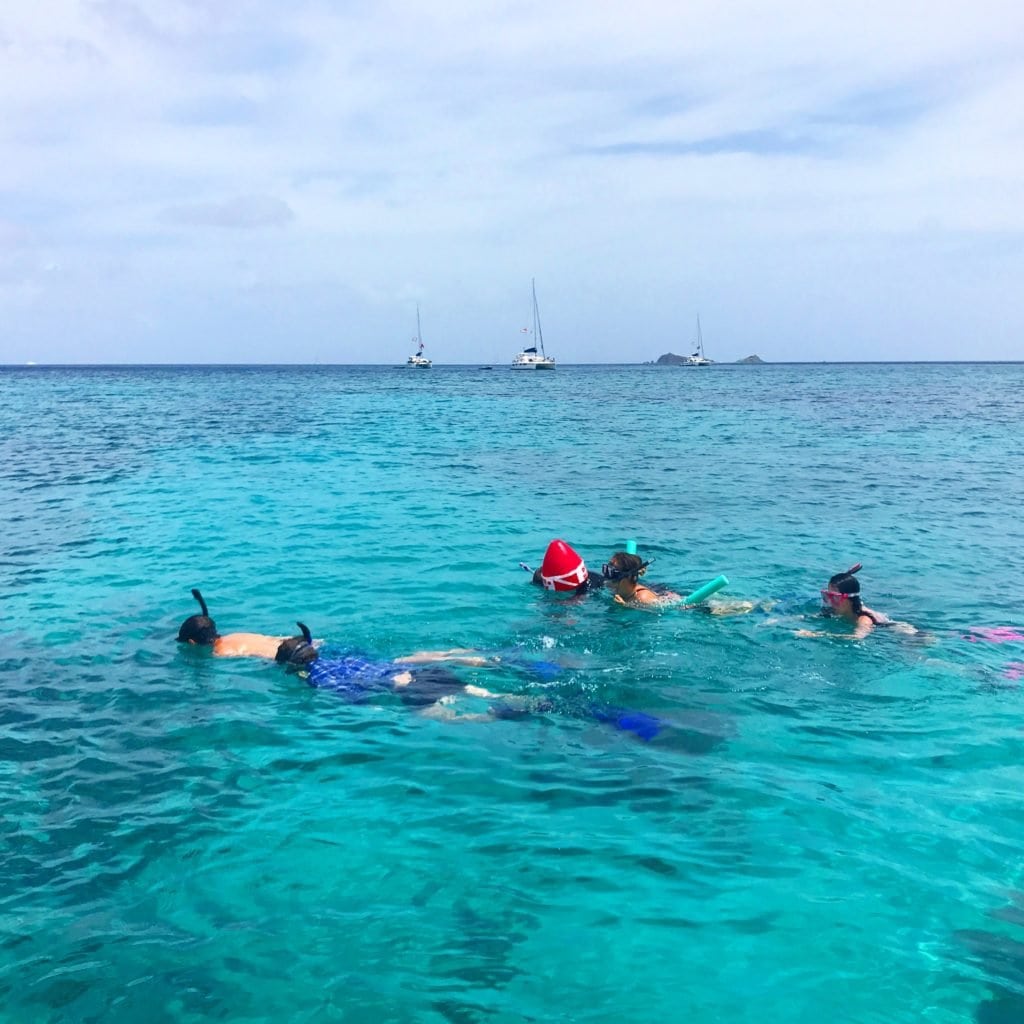 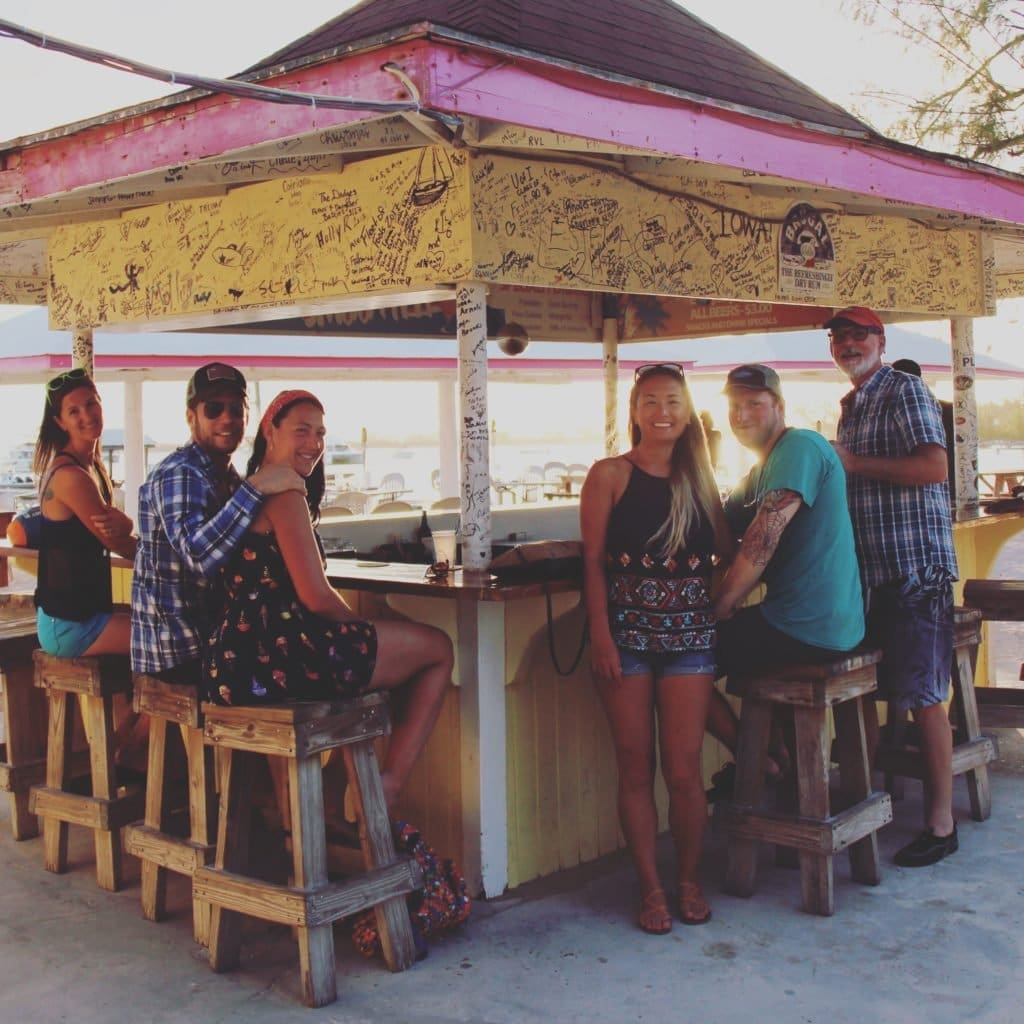 At a small bar on the island of Anegada. 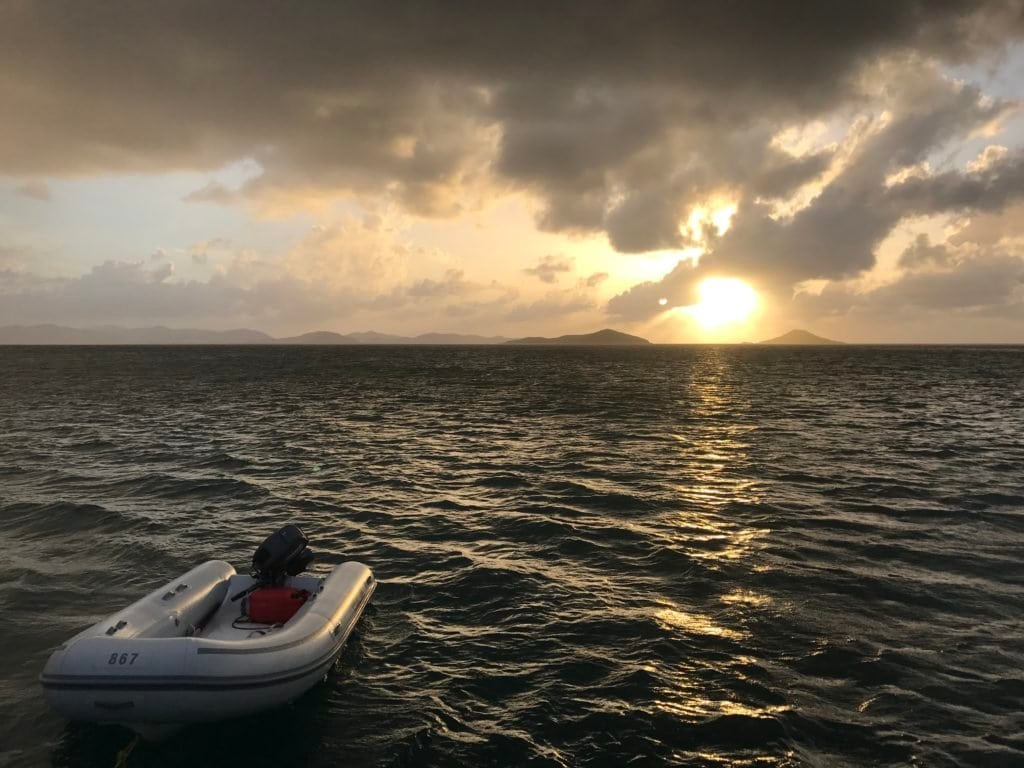 We saw many amazing sunsets on the sailing charter. 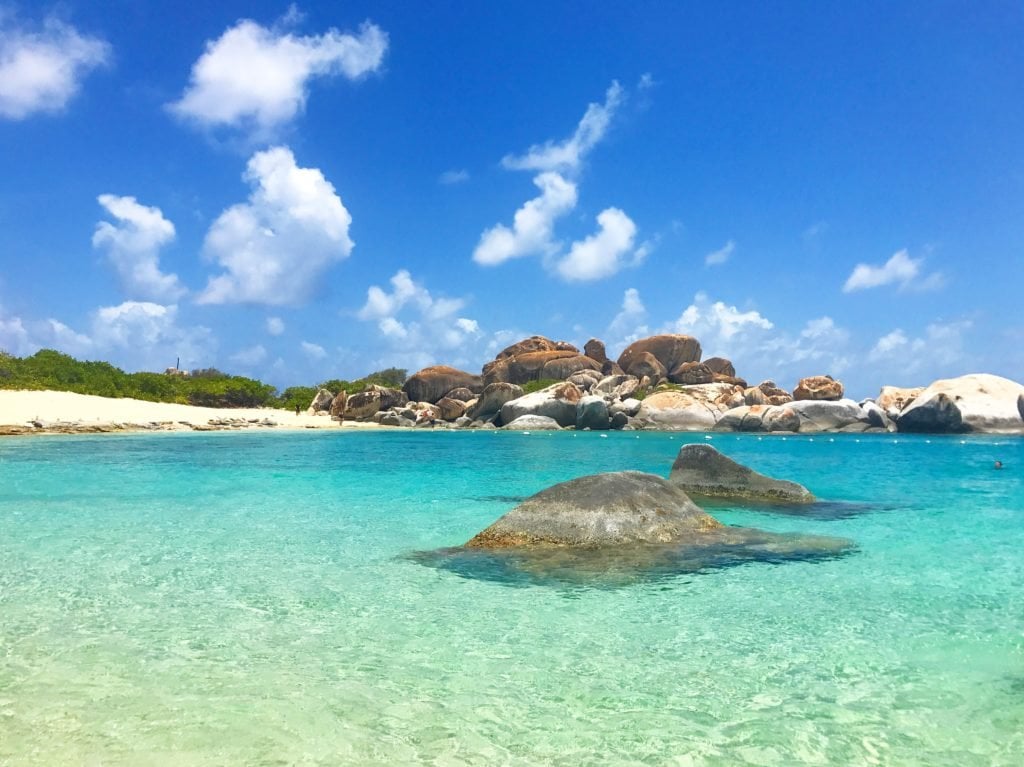 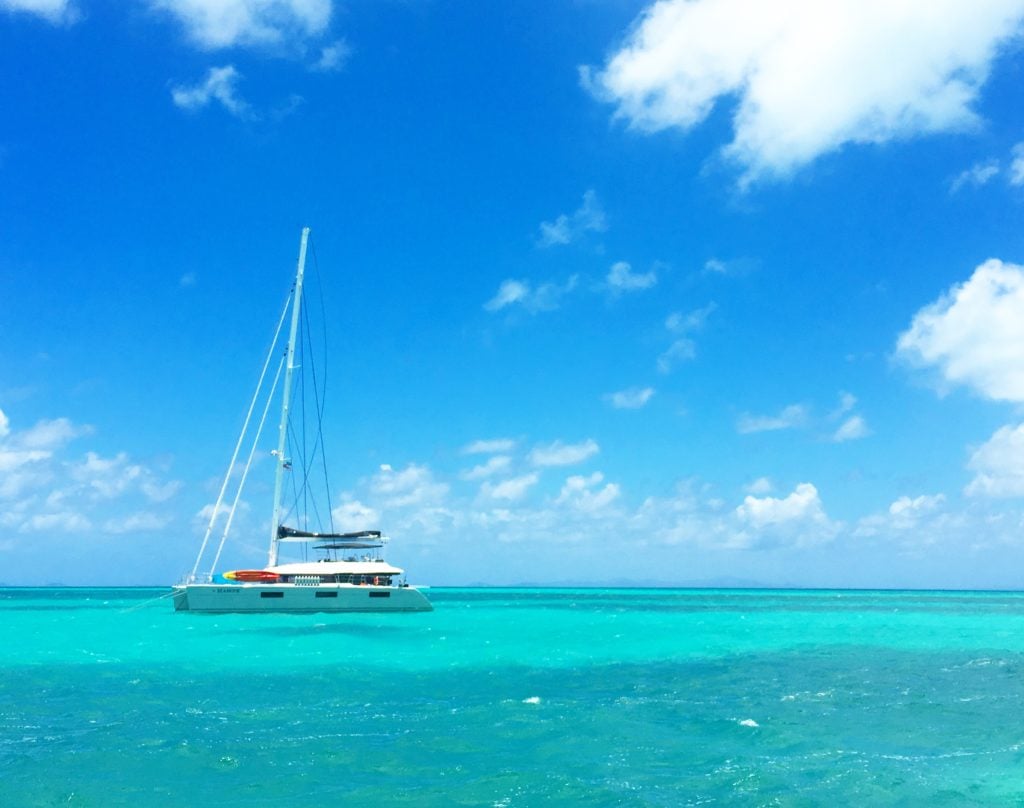 The beautiful blue water that surrounds Anegada – that’s the shadow underneath that catamaran! 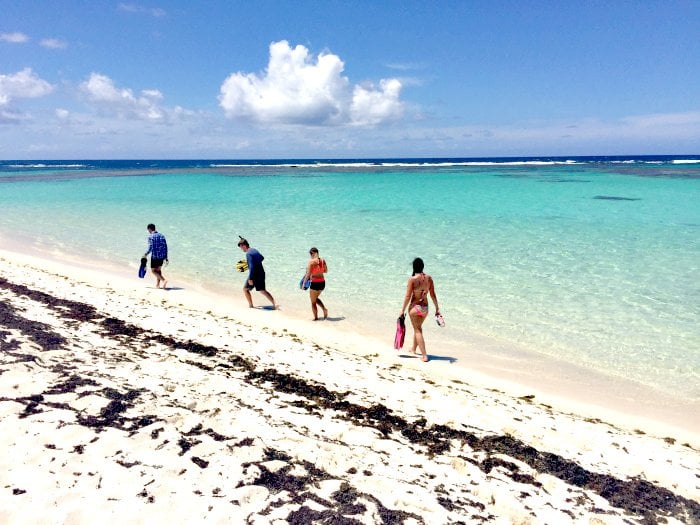 We snorkeled a lot on this sailing trip.