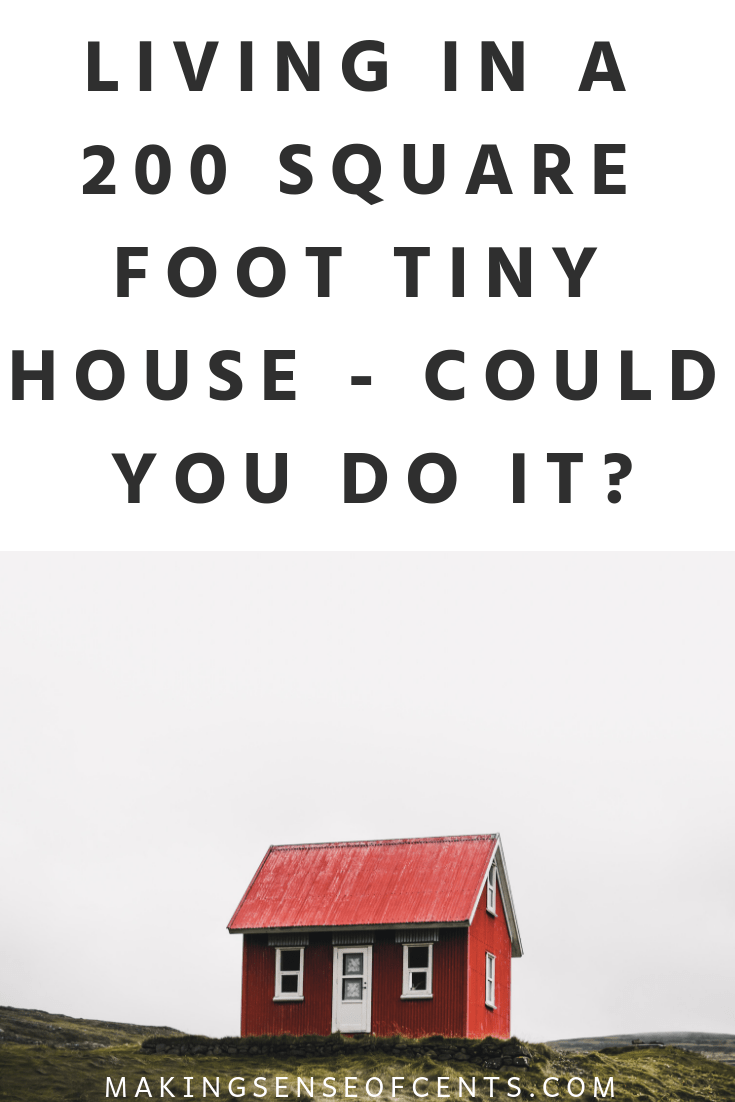 When we first moved out when we were 18, we moved into a very tiny house. Technically, it was not a “tiny home,” but to us it was.

It was extremely small home at around 400 square feet (less than that if you don’t count the basement), but it was cheap, had a backyard and was located very close to the college I was about to start attending.

Also, as a reminder, last year Jordann also posted about how she used to live in a 400 square foot house. I also recently published the interview I Live in a 175 Square Foot Tiny Home – Sailboat Living. I highly recommend you read these two posts!

I recently became interested in tiny homes again when I was watching a documentary on Netflix (we’re starting to find cable less and less worthwhile) called Tiny: A Story About Living Small. This documentary followed a man building his very own tiny home, and the documentary also showed others who lived in their own tiny homes.

I find tiny homes very interesting. They make great use of their space, they are usually very cute, and they are very affordable. Even with the positives below though, I don’t think it’s something I could do.

For me, the negatives greatly outweigh the positives. I think we could do something smaller than what we currently have, but a 200 square feet tiny home is just too extreme for me.

Below are the positives and negatives of living in a tiny house:

Pro: Your housing expenses will be cheaper with a tiny home.

The average tiny home costs less than $30,000 to build. You can also buy a tiny home for very cheap. That price before includes the exterior and interior of the home. That is very cheap! That is much cheaper than the average home.

However, I do think you have to remember about where you are going to place this tiny home. Yes, you can buy land for cheap, but land can also be very expensive in other areas.

Repairs, maintenance and replacements will also most likely be much cheaper in a tiny home.

Con: I think it would be difficult with children and pets.

We don’t have children yet, but we would like to have them in the future. With all of the people I’ve seen and read about who live in tiny homes, I don’t think there’s been a single one who had children or pets.

I think it would just be very difficult with a family. People need their space… Or, maybe that’s just me?

However, I think if it were just one or two people living in a tiny home, then it would probably be much more doable. When we lived in our 400 square foot house (let’s keep in mind that we haven’t lived there in a very long time), it wasn’t completely bad. The size didn’t really bother us at all at the time. I think it really helped that there were multiple small rooms to escape too, and there was also a front and backyard and porch.

I am a bit of a hoarder. Just ask Wes and he will probably want to cry just thinking about how much stuff I have.

My closet is jam packed to the ceiling with stuff, and then I also have things in the guest bedroom and in our basement.

Moving into a tiny home would probably be a lifesaver in that I would be forced to think about each purchase I make. Since there’s only so much room in a tiny home, you will buy fewer items.

Con: Having guests over won’t be comfortable.

I remember watching in the documentary when the main person being filmed had guests over.

He invited his family over to see the home he just built and it was extremely cramped. It was almost like everyone had to bend over in order for their to be room for everyone.

Now, I’ll be honest, I don’t throw raging parties or anything, but I would like the option of having people over when I can. This is especially true since we plan on moving to a new state and we would like people to visit us occasionally.

Pro: You may be able to bring the tiny house when traveling.

Okay, this doesn’t apply to every single tiny house, but there are some that are small enough where you can actually travel with it.

You can bring your tiny home to where you want it to be, and you may even be able to do some road trips in it as well.

This makes the list of possible places to live pretty much endless.

Con: Not a lot of personal space.

This is no surprise. They are called tiny homes for a reason. According to the documentary, tiny homes are homes that are 200 square feet or less. That is extremely small.

That’s smaller than my bedroom, and my bedroom is not huge by any means.

Since I work from home 24/7 now, I would like to have more space since I’m at home more. I think I would get a little crazy if I was in the same exact room hour after hour, day after day.

Would you ever live in a tiny home? Why or why not? How small could you go? How big is your home currently?

Also, if you live in a tiny home (less than 250 square feet preferably), I’d love to hear from you and possibly conduct an interview for this blog. Please send me an email if you are interested.