Every so often, I hear from someone who says that I shouldn’t talk about money so openly, as they believe it is rude, distasteful, vulgar… I could go on and on. 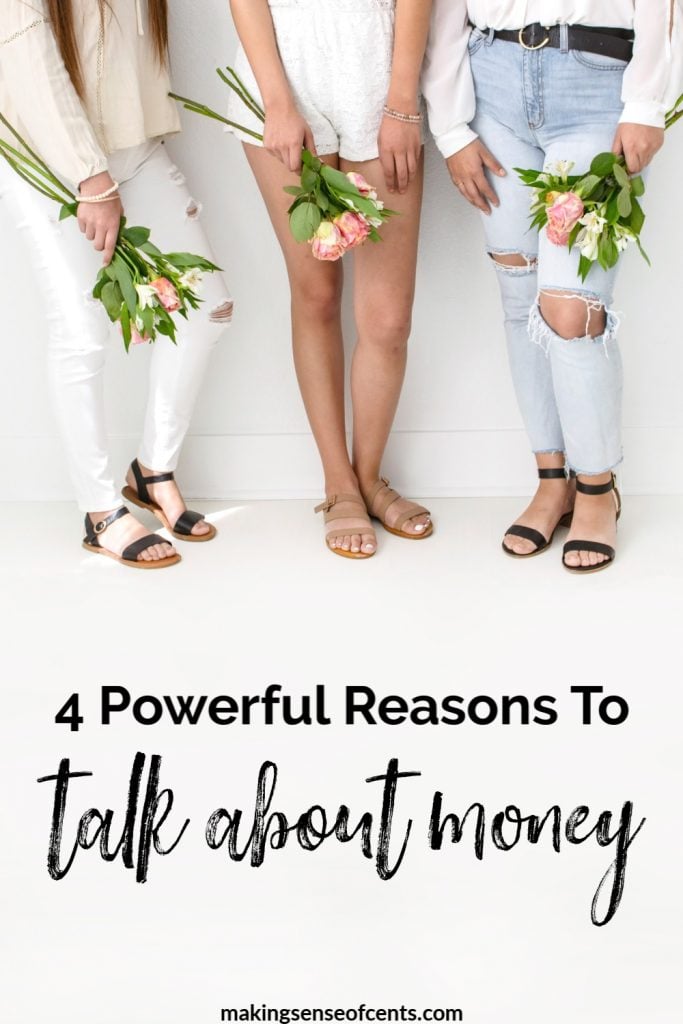 For someone like me who is comfortable talking about how much I earn, the amount I save, and more, I make a lot of people uncomfortable, haha.

But, that’s not what I’m trying to do.

I’m not trying to show off, make people feel less than they are, be rude, or anything like that.

Instead, I believe that being more open about money is better for everyone!

However, I regularly see people being shamed for talking about money, and I see it more and more on social media.

Recently on Facebook, someone I know asked their friends and family how much money they were saving on a monthly basis. It seemed like a pretty harmless question, and I was happy to see someone I know in real life openly talk about money.

Their reasoning was that they just began saving and they simply wanted to talk with others about saving money. They were looking for motivation and support – they weren’t trying to do any harm.

The conversation continued, others chimed in, and it became clear that openly talking about money made some people quite angry. There was an overwhelming amount of people who said the whole conversation was tacky and that money should not be discussed, EVER.

Why does talking about money have to be so secretive?

Is it really that tacky?

Having a financial blog means I get some interesting emails about this sort of thing, some from people who think it’s crazy that I publish income reports and talk about money so openly.

So, I’m very aware of the stigma that comes from talking about money.

In fact, according to a survey conducted by Ally Bank, 70% of Americans think that it’s rude to talk about money. Respondents said they were more likely to disclose their income (39%) over savings (30%) or debt (29%) to family and friends.

And, it doesn’t end there. People don’t like to talk about how much they pay in rent, their monthly mortgage payment, or even how much they spend on internet service.

I don’t get it – why does the amount you pay for internet each month have to be a secret?

Talking about money is even seen as taboo among close family members, even among married couples. According to a survey done by Fidelity, 43% of respondents don’t know how much their partner earns, and 36% are unaware of the amount they have invested.

Here’s one last interesting study that I’d like to bring up, University College London found that people were seven times more likely to talk to a stranger about sex, affairs, and sexually transmitted diseases than discussing their salary.

You’d tell a stranger that you have an STD rather than tell them how much you make?

That is just crazy!

I think we should all be more open about money. Money is a topic that influences all of our lives, whether we want to believe it or not.

4 powerful reasons why you should talk about money more often and openly.

1. Being open about finances can help everyone.

This is one thing that I really believe – talking about money can help others.

If you are someone that feels money talk is taboo, this may be difficult to understand how openly talking about money can really help you out. But, the problem is that without money talks, many people don’t know:

Without talking about money, it would also be hard to realize that you need to improve your financial situation.

Many people don’t like talking about money because their issues become “too real.” They may even feel shame about their financial mistakes, or they may feel that they aren’t doing as well as others.

Well, you’re never going to do any better if you aren’t aware of your financial situation.

Being in the dark isn’t going to help anyone. It might actually hold you back because you’re just taking a random guess at everything.

However, if you know things like the average salary for a person in your position, you’ll be able to use that information to your advantage. It can help you negotiate a raise so you are paid fairly for your work and can start earning more.

Also, by knowing how much a person is paying for rent or even car insurance, you’ll know if you are paying too much. This can help you make changes that will allow you to start saving more money.

The list of reasons for how talking about money can help everyone goes on and on.

Knowledge is power, and knowing more about money will help you!

2. Being aware of your own finances is important.

If you take anything out of this article, it should be that fully understanding your family’s financial situation is a must.

There are many financial horror stories where one spouse doesn’t realize the other has hundreds of thousands of dollars of debt. Or, one spouse thinks the family is financially sound, when in reality, the truth is the exact opposite.

I’ve heard so many people say that they have no idea what their monthly mortgage or rent payment is, they don’t know how much they are putting towards retirement, and so on.

Many people don’t even like talking to their partner about money!

Even more shocking, some are completely unaware of what their household debt is and can’t even estimate what they might owe. Or, if they do make a guess, their spouse blurts out how wrong they are.

Sadly, this is surprisingly common.

Talking about money in relationships is an important part of a financially sound partnership. A family who has regular money talks and budget meetings is more likely to be financially successful and happier than a family that doesn’t.

There are many ways for these talks to help you and your family.

Recommended for talking about finances in a relationship: Family Budget Meetings – Yes, You Need To Have Them

Even though I don’t have kids, I remember being one and how my parents handled money. My dad taught me many valuable lessons about money and I think that’s why I’ve become good at managing it in my adult life. He taught me the value of using credit cards responsibly, the power of frugal living, and more.

When you avoid talking to kids about money, you are teaching them that money talks are taboo, and I’ve already explained how beneficial it is to talk about money. Talking about money is teaching them good financial values and setting them up for future success.

Here are some basics from ChildMind.org for talking to kids about money:

4. It doesn’t have to be rude or awkward to talk about money.

The example in the beginning of the article where my friend asked about money on Facebook was something I was happy to see because I know how important it is to talk about money. And like I said, they were just looking for motivation and support. They were also excited that they were finally starting to save.

But, many of the responses made them feel like they were doing something wrong.

This makes me so sad, because talking about money can be something that helps so many people. Personal finance can be really confusing. There are complicated financial terms, commonly misunderstood information, myths, and more.

You can teach someone so much valuable information when you talk about money. We go to our close friends and family for things like relationship advice, why wouldn’t we trust them with financial topics?

Saying “let’s talk about money” is letting them know that they can trust you for motivation, guidance, support, etc. You can lift each other up and help others reach their goals.

It doesn’t have to be awkward, and you can talk about money in a way that helps everyone.

Here are a few suggestions for talking about money with your family and friends:

There are many ways you can start talking about money with others in your life, and it can really help out everyone involved.