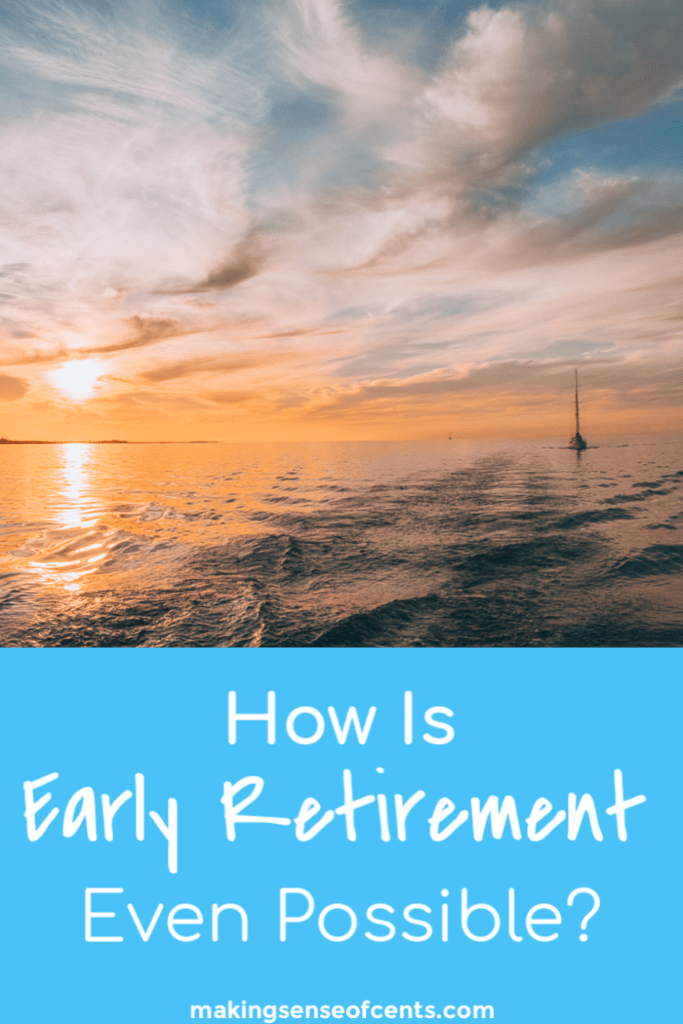 Early retirement has been extremely popular lately, and I’m sure you’ve been hearing about it a ton.

Between “Why I Hate the FIRE Movement,” says Suze Orman (from Afford Anything), Mr. Money Mustache, and any of the other amazing FIRE blogs, early retirement has been in the news a lot lately.

But, I know there are a lot of people who are confused or even skeptical of what early retirement is and whether or not it is a real thing.

First, if this is the first time you have heard of FIRE, it stands for Financial Independence, Retire Early, and it can mean a lot of things to different people. But, the basic idea is that you work towards financial independence– either having enough saved and/or enough passive income to cover your expenses. You can then choose whether or not you want to work.

That sounds pretty amazing to me!

For most people, though, retirement means something that only older people do after decades and decades of working at a full-time job. However, there are many out there who sadly aren’t saving enough money when preparing for retirement at the traditional retirement age of 65-67. And, as pensions become a thing of the past, saving for retirement will become even more important.

According to one survey, 56% Of Americans Have Less Than $10,000 Saved For Retirement. According to a different survey done by Bankrate, 36% of people in the U.S. have absolutely nothing saved for retirement.

Even though it’s obvious that there are many people out there who need to make saving for retirement a priority, there are lots of people criticizing those who are making it a goal to retire early.

I see this a lot when I read articles about people who have retired early. I always scroll down to the comments of these articles because I find it interesting to see what people have to say about early retirement. I probably shouldn’t because I am always shocked, and saddened, when I read all of the negative comments.

People say that those who retire early won’t be prepared for emergencies and how boring it would be to retire early.

Really, what could feel better than working hard to your save money, investing it well, and then realizing the financial freedom you have to quit your day job so you can live your dream life!?

Whether you want to travel, continue working (Yes, you can continue working! There’s no rule that you have to quit all together.), spend more time with family, or whatever else, early retirement gives you the ability to choose your own future.

I have saved enough to retire whenever I would like. Yes, I earn a high income, but I also save a large part of my income and watch any wasteful spending.

And, don’t worry, I love my blog too much to retire anytime soon, but knowing that I can retire early just means that I am prepared for whatever might happen in the future. As you know, I’m a worrier, and I would much rather be safe than sorry. There are so many what ifs, like there could be a medical emergency, the industry may change, I may change, and so on.

Plus, early retirement can happen at whatever age you want it to happen, as long as you are prepared! A lot of the big stories about early retirement are about people in their 30’s, but you can retire early at age 60, and that’s still awesome!

The point of early retirement is really about striving to better yourself financially. It means getting out of debt, spending less than you earn, and saving for the future.

There are a lot of amazing people who are doing extreme early retirement, like those in the FIRE movement (who I love!). I have heard of people who have sold all of their possessions and moved into a van so that they can retire early, but I know that isn’t for everyone.

Not all early retirement paths have to be that extreme, some can actually be quite normal. It’s just about getting rid of your debt, lowering your expenses (which will automatically happen when you get out of debt), spending less than you earn, and investing money for your future.

Many people can still live a normal life while they prepare for early retirement too. Planning for your future just starts with being realistic about your income and spending, then you can set whatever early retirement goal suits you from there.

How is early retirement possible?

How to calculate the amount you will need to retire early.

Planning for early retirement means that you will have to very carefully consider all of your different expenses. For most early retirees, that starts by creating a budget that allows them to really know their expenses and save for them well into the future.

A person planning for early retirement is thinking about what ifs and emergencies as well. No one is going to have their calculations correct down to the penny, but you can factor in possible future expenses.

Still, many people don’t believe that early retirement is possible. There are lots who think that $1,000,000 – $5,000,000 isn’t enough to retire young, and that early retirees aren’t thinking about future expenses, when they really are.

I believe this has a lot to do with the fact that many people don’t understand compound interest and investing. Both of these things let your money work and grow for you, well into the future, meaning that an early retirees’ retirement funds are most likely going to grow and will cover annual expenses and emergencies.

Early retirees aren’t just multiplying their annual expenses by 25 and assuming that will be enough money for the rest of their life. They know how investments work, are staying diversified, and have backup plans if necessary.

When you save enough of your money and only live off of a designated percentage of your savings or invested income each year after you retire early, you will find that early retirement is possible.

Before throwing the whole idea out, you may want to see how you are prepared for retirement and how early retirement may be possible for you. 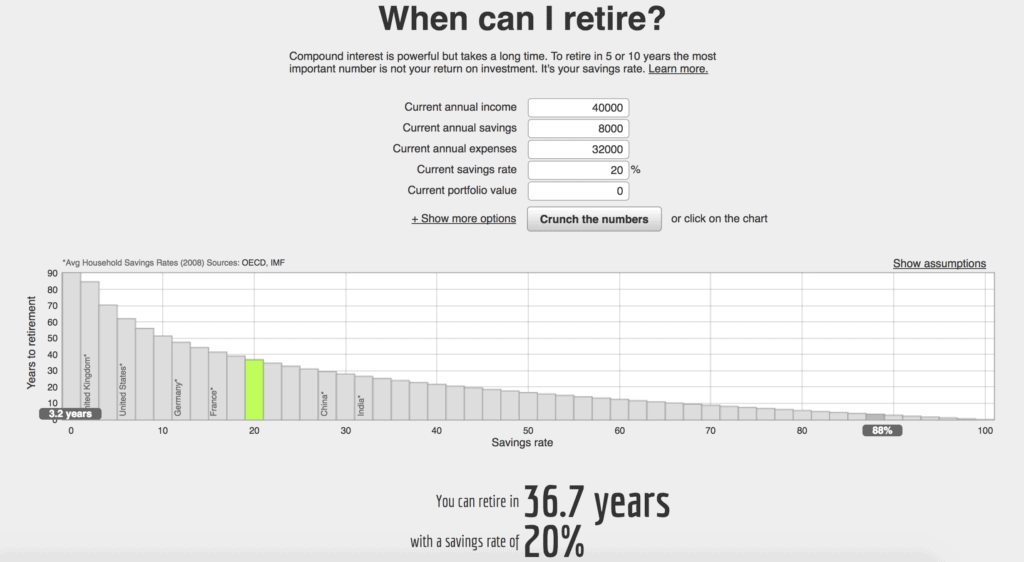 As you can see from the above:

So, by saving more of your money, you are likely to retire sooner. Makes sense, right?

And, that’s what early retirees are doing! They have gotten out of debt and live off of less than they earn so that they can save at a much higher rate.

You’ll find plenty to do in early retirement.

I have heard from so many people that retiring early isn’t something they want because they’ll be too bored.

To be honest, I think this is just crazy!

If you are looking to retire early, you probably aren’t the type to just sit around all day. I mean, if that’s your plan for retirement, that’s totally fine because you get to choose. But, for many, early retirement still means working to some extent, while also having the freedom to spend your time pursuing your passion, traveling, spending more time with friends and family, and more.

With all the extra time you have after retiring early, you could volunteer, pursue a passion, find fun things to do, take up a hobby, and more.

Early retirees aren’t lazy and just looking for a way to escape the work world. I actually believe they are very hard workers, who want to live life on their own terms.

Heck, you could even continue working like many early retirees do, if that’s what you truly desire. Knowing you can retire early just gives you choices in case something changes in the future.

For me, if I chose to stop working one day, I could easily find time to fill my day. I could travel even more, go on more long hikes, be more fit, read more, learn more (I’ve been wanting to learn a new language), find a passion project, spend more time with friends and family, etc. The list is endless!

The average early retiree, that I know, has a very active and meaningful life.

Related: What Is Financial Independence, Retire Early? Answers To FAQs About FIRE

You can still enjoy life while saving for early retirement.

I think this is one of the hardest things for people to understand about retiring early.

Just because you are saving for retirement doesn’t mean you are eating ramen noodles for breakfast, lunch, and dinner.

There are plenty of ways to have frugal fun, eat on a budget, and so on. You can even see the world, while you are saving for early retirement.

Remember, the best things in life are free. The outdoors, spending quality time with those you love, laughing, and more are all FREE.

When do you want to retire and when WILL you retire? What do you think of early retirement?