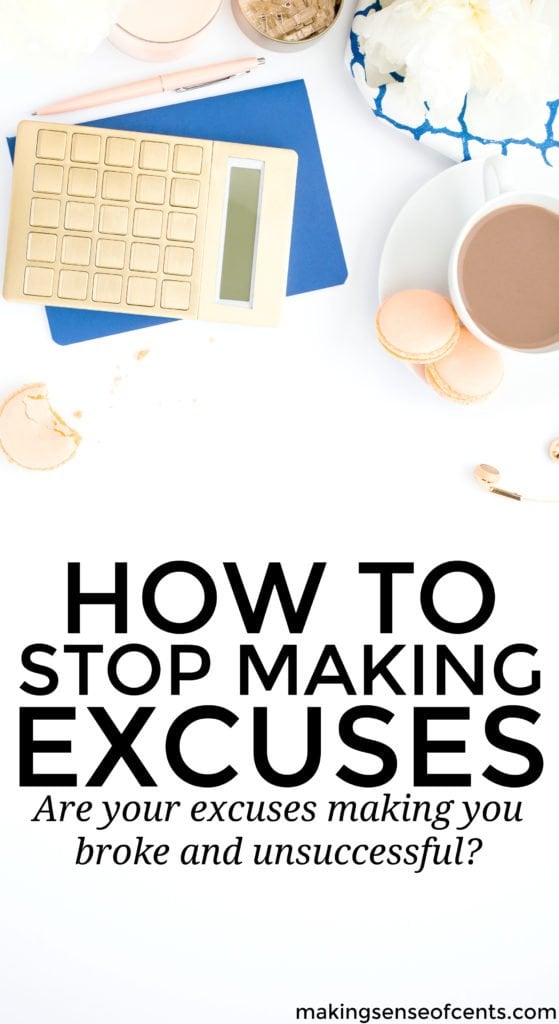 The title of this post is very straightforward, and I wanted it to be that way. Everyone is guilty of making excuses, and I know that people will continue to make them until they realize that excuses are just that- excuses.

Just think about the last time you said “That won’t work for me because (insert your excuse here).”

As a personal finance expert, I hear a lot of reasons for why a person can’t save money, pay off debt, live the life they want, reach retirement, and so on.

There are plenty of legitimate reasons for why some people have financial setbacks, but there are still many people making excuses for why they can’t achieve their goals or why their life is bad.

The problem with making excuses is that this bad habit can hold you back, which means that you may never reach your financial or life goals.

To put it simply, excuses prevent you from living the life you want. You’re giving up before you’ve even begun.

To reach your goals and get what you want, you’ll have to work hard and stop making excuses. No one has a perfect life, so it’s a waste to make excuses for why something is impossible for you.

Trust me, I know how easy it is to make excuses for things, and I’ve made plenty of them.

However, I no longer make excuses for everything and this has significantly changed my life, my outlook, and my mindset.

Sure, it’s nice every now and then to make an excuse for yourself whenever you’re stressed or you just feel defeated. But, that just won’t get you anywhere!

Instead of finding reasons for why you shouldn’t pursue a goal, you should spend your time creating a plan to achieve your dream life.

Next time you’re about to make an excuse, remember that being negative and making excuses is just a huge waste of time. You’re better than that!

Related: 11 Ways You’re Wasting Time And How To Change

You won’t fix your problems by making excuses.

If you want to stop living paycheck to paycheck, have money in savings and for retirement, and to take control of your financial situation, you’ll have to start owning up to your mistakes and finding a way to change things for the better.

Stop comparing yourself to others.

When making excuses, you may find yourself comparing yourself to others and coming up with reasons for why something is impossible for you.

By comparing yourself to others and minimizing their accomplishments, you are just holding yourself back.

Sure, you may not be able to reach a goal as quickly as someone else or it may require more hard work, but that doesn’t mean that everything is impossible for you. Everyone is on a different path, and there are people who are better off than you and people who are worse off.

Instead of comparing your path to those around you, you should focus on what you can do to make your dream a reality.

If you truly want something, you’ll make it happen.

If you really want something in life, you’ll put the needed effort towards making it a reality.

By making an excuse for why something is impossible for you, you’re already quitting.

Who wants to be a quitter?

Reaching your goal will take time and there might be setbacks, but your goal is only impossible if you quit before you get there.

Find out why you make excuses.

People make excuses for all sorts of reasons. By figuring out why you make excuses, you’ll be closer to tackling your problem.

Start believing in yourself.

Success isn’t easy. If it were easy, then everyone would be extremely successful and that word wouldn’t even exist.

To take control of your life and to be successful, you need to start believing in yourself and stop making excuses.

Next time you think “That’s not possible for me because of (your excuse),” you should think instead about how you can make your goal a reality.

You NEED to admit that you are making excuses, because until you admit that, you will most likely just continue making them.

Yes, it may be a little difficult to change your mindset in the beginning, but as time passes you’ll realize that your excuses were just a waste of time and thought. Because, if you really want something, you can find ways to make it a reality.

Related: Be More Confident And Get What You Want In Life

What excuses have you made in the past? Do you believe that making excuses can hold a person back?