I love a good debt free story! If you are interested in learning how to pay off debt, the 18 stories I’m about to share will teach, motivate, and inspire you. 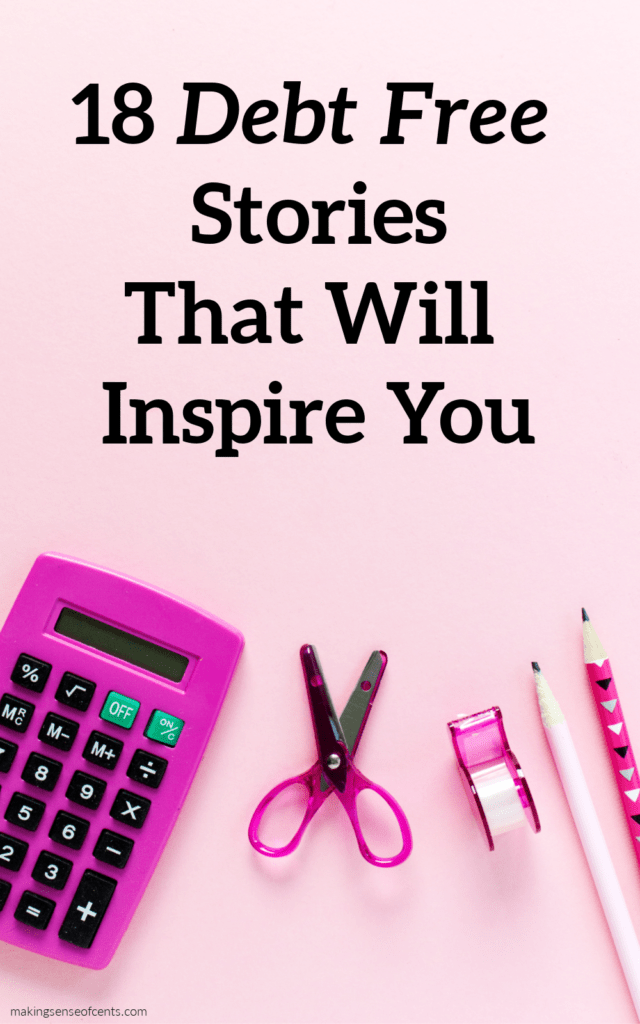 When I was paying off my $40,000 student loan debt in 7 months, I spent a lot of time online reading how other people paid off their debt.

Because I wanted to pay off my debt as quickly as possible, I knew I needed some extra motivation.

Finding a good debt free story would give me the boost of energy I needed to keep working on my side hustles, finding new ways to save, and put all of my extra money towards debt.

I also learned so many great tips and tricks to help me pay off my debt that I wouldn’t have learned about otherwise. Not all of the tips I read about worked for me, but some did.

By reading other people’s debt payoff stories and learning how to become debt free, I believe that you can find motivation to pay off your own debt.

You can learn new approaches to paying off debt. And, you will realize that paying off your debt is possible.

You may find one or two stories of becoming debt free in this article that really click with you – maybe the person was in a similar situation as you, had more debt than you, etc. Finding a debt free story that inspires you can be truly motivating.

One of the things I also like reading about in these stories is how paying off debt changed the person’s life for the better.

And, learning how to become debt free can lead to many positives, such as:

In today’s article, I am sharing 18 interviews and guest posts I did with people who share their debt free story. You’ll learn how much debt they had, how long it took to pay off, and what they did to make it possible.

While some of their debt payoff strategies may seem crazy or impossible to you, they show that paying off debt is possible.

But, don’t get discouraged if it takes you longer than what you read about in these stories. It isn’t about comparing yourself to others, and everyone has to start somewhere. Even if you can only pay off a fraction of what the people below are able to do or if it takes you twice as long, you are still doing something to improve your life.

Below are 18 great debt free stories to motivate you.

Here’s the basic gist of who Lauren was before she got serious about paying off her debt:

Sarah paid off $29,000 in debt by living in a van full-time. I love this debt free story because I am just like Sarah – love traveling but hate moving! She was able to combine those things and pay off debt.

“Why am I living in a van? As a traveling healthcare professional, I typically work contracts at healthcare facilities for 13 weeks at a time. The decision to downsize was initially derived from my inherent laziness. You see, I love traveling but loathe moving. The thought of having to do less work each time I moved was highly motivating. My first three years (before Vanny), I would pay for short-term furnished housing which was very expensive. Most of the time I found the housing myself and it cost anywhere from $1600-2900 a month. I could think of so many better ways to spend my money so I quickly began brainstorming alternate options. The revolution of tiny house/home living that I had been reading about had me very intrigued.”

4. How our family of 5 went from house poor to debt free in 3 years

Do you feel like you are house poor? Here’s a great post from Renee on how her and her family went from being house poor to debt free in just 3 years.

Here’s a quick snapshot of her debt free story:

“Three years ago my marriage was on the rocks, I felt aimless in my career, our family life was messy, and we were officially smack dab in the middle of being crazy house poor. We got to a point where we knew it was either cut our losses and walk away from our marriage, or take a hit and sell the house that was breaking us.”

Read more at How Our Family of 5 Went from House Poor to Debt Free in 3 Years.

Do you want to pay off debt but also invest at the same time? Here’s a great debt payoff story that shows exactly how this is possible. I get a lot of questions about whether or not you should pay off debt or save/invest, and this story proves you can do both.

Read more at How I Repaid $65,000 In Student Loans and Invested at the Same Time.

This couple paid off $58,000 in student loan debt, all while traveling! This is an incredible debt free story that you will want to read if you love traveling too.

“My husband and I got to explore eight new countries together and still pay off $58,000 in student loans. It was hard work at times but it also inspired an even greater love for traveling and gave us the financial freedom to pursue freelance careers. Now I move to a new city almost every month and that dream of full-time travel that I had as a child has become a reality.”

Read more at How We Visited 8 New Countries in 2 Years – While Also Paying Off 58k in Student Debt.

This is the story of how Sarah paid off $100,000 of debt on a single income. Sarah was a  stay-at-home mom, and she got very serious about budgeting to become debt free.

Here’s a quick snapshot of this debt free story:

“We outlined a strategy to budget by paycheck using a zero-based budget, and I created a budget binder to help us track our finances. This strategy helped us pay off $100,000 in 4 years on a single income while growing our family (and we’re NOT rich!).”

Alyssa Hunt paid off $30,000 in student loans in 2 years, all while simply just paying the minimum balance. I know that might seem like the complete opposite of how she would pay off her debt so quickly, but you’ll learn how it worked in Alyssa’s debt free story.

“I owe my success to two major decisions:

The reason I chose not to consolidate my loans into 1 giant loan was because I chose to focus on paying off one loan at a time.”

Read more at How I Paid Off $30,000 of Student Loans in 2 Years by Paying the Minimum Balance.

This is a great debt free story from Zach Buchenau. He is a reader of Making Sense of Cents and shares how he and his wife paid off $34,000 in debt in the first six months of their marriage.

In her article, Hood Rich – How Living in the Hood Saved Our Finances, she says “We live in ‘Da ‘Hood.’ Corner stores, kids out late at night, gunshots, alley mechanics and all the glory of what the ‘hood life entails. Yes, this is where our home is located. A home on the next block is selling for $2,500.”

Nolan Martin is a military officer who successfully paid off $100,000 in debt in just 40 months.

“We were incredibly anxious to get our lives started together. Fresh out of college and new to the military life, I convinced my wife, Erin, to marry me. Like most new couples, we both entered the relationship with plenty of debt on both sides. I was fortunate enough to receive a ‘career starter’ loan of $35,000. Erin represented the ‘normal’ in America with over $40,000 in student loans. Then of course came the things you have to buy in a new marriage: the car, the house, and the puppies. On February 1st, 2012, we had accumulated over $100,000 in debt.”

James and his wife paid off $62,000 in debt in just seven months! Their debt free story involves turning a profit on their wedding, combining their finances, and paying off $62,000 of debt in seven months. Their lives changed drastically once they learned how to become debt free.

Here’s a quick summary of how they got into debt:

Here’s a quick summary of her debt freedom story:

“While we knew we had student debt, we had always assumed that we would simply pay the minimum until it was gone and that would be that. What did we find when we did the math? It turns out that my wife and I owe a grand total of almost $200,000 in debt (OUCH!). Even worse? The minimum payments don’t even begin to cover the interest which means that no matter how many payments we make, we will never escape from this debt’s grasp.”

This is a great debt free story about how side hustling can completely change your life.

“To date, we have completely paid off $96,500 in student loans, our $15,000 wedding, $5,000 in credit card debt, a $6,500 car, and over half of our mortgage – $76,600 and counting! No, we didn’t receive an inheritance or win the lottery. Our secret? An extremely frugal lifestyle supplemented by re-selling second hand items on eBay. The second hand items come from the weekly garage sales, estate sales, and auctions that we attend.”

Claudia and Garrett paid off a crazy amount of debt and are now living debt free!

“I was one of those weird kids that couldn’t wait to graduate from college. I’ve always had a long-term focus and viewed college as a stepping stone. One day during my freshman year, I remember walking to class with a friend saying that I couldn’t wait to graduate and start making some money. My friend turned to me with an incredulous look and confessed he planned to live it up while he could. Needless to say, I probably didn’t enjoy college as much as others did.”

Okay, this story is my own, but I’m still very proud of it 🙂 Here’s how I paid off my student loan debt.

When I graduated with my Finance MBA, I had around $40,000 in student loan debt, which included debt from my undergraduate degrees as well. I was able to pay it all off in just seven months because I was able to find ways to make extra money!

I hope you enjoyed each debt free story. Many of these drowning in debt stories can help introduce you to new ideas to save money.

Do you want to learn how to become debt free? How far away are you from debt freedom?