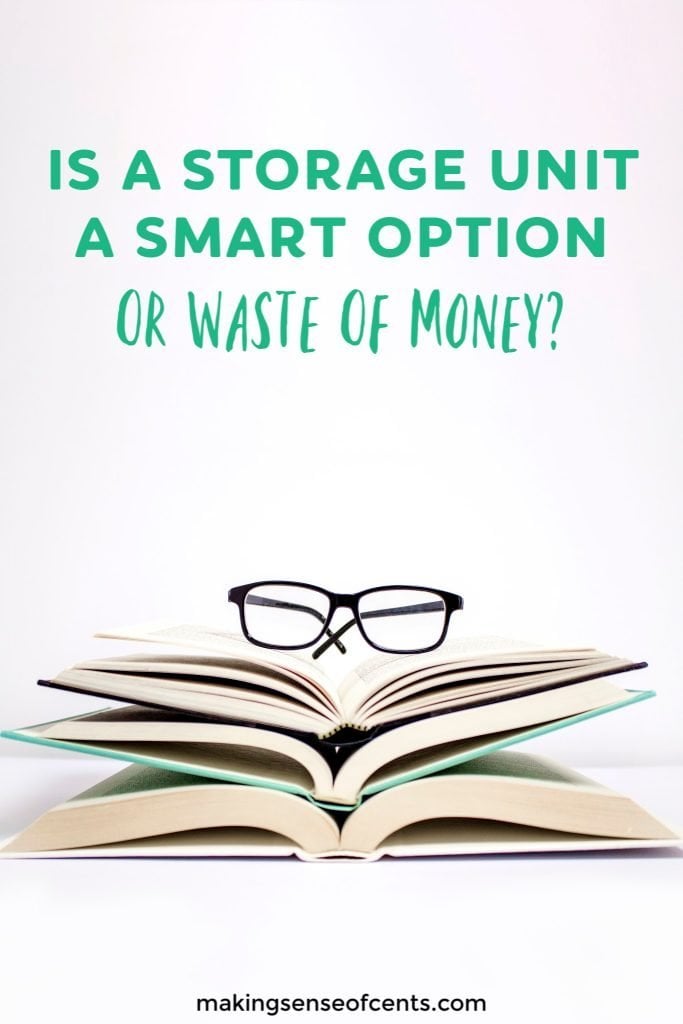 When we downsized our house and belongings to move into our RV, we rented a storage unit for a few months to help us deal with some things we still had left but couldn’t fit into the RV. While it was helpful at the time, we are now really happy that we got rid of our storage unit.

It’s been a few years since we got rid of it, but we’re still very happy with our decision!

I won’t lie, though, just a few months ago, we were talking about whether or not we should get a small storage unit again for some of the gear we have (bikes, bikes, and more bikes, and other outdoors gear that we have) and things that we have collected over the past few years while traveling.

But, we’ve decided not to.

We realized that we needed to start thinking even harder about the purchases we are making and either give away or sell the things we were thinking about storing. It definitely stings a little to sell or give something away that you’ve recently purchased because you hardly ever make all of your money back. But, it does make you more mindful with future purchases.

However, that’s not the case for others.

Despite larger homes, according to SpareFoot, nearly 10% of households also rent a self-storage unit. And, many of these people have a house with a garage, which they already use to store some of their stuff.

And, according to SSA, 52% of those who participated in their survey reported that they rented their storage unit for one year or more and only about 13% of customers rented storage for less than three months.

That’s a lot of storage units holding things that most people will probably never use again.

We didn’t want to be those people, so we cleared out our storage unit and got rid of it. We were paying $185 a month for a small storage unit, mainly for photo albums, childhood items, and anything else that we could stack in there. It was pricey because we were in a small town.

We only had the storage unit for around six months, but in that small amount of time we had already spent $1,110 in storage unit costs.

That’s just an unbelievable amount of money to spend on things that we knew we weren’t going to need or use for at least several more years.

The storage unit wasn’t completely horrible, but there were some negatives:

So, we rented a moving truck and had everything moved to Wes’s parents’ attic. Don’t worry, they lucked out as well. We gave them all of the expensive, new furniture that we had stupidly bought right before we fell in love with RV life, haha. So, all we really have stored there are photo albums and childhood mementos.

Sure, there are legitimately good reasons to have a storage unit, such as if you are in-between homes, but for the most part, the average person is wasting money by having a storage unit.

Before you decide to get a storage unit, I recommend reading my blog post Downsizing Your Home? Here’s How I Went From A 2,000 Square Foot House To An RV.

Yes, it is possible to downsize, and I know this because I currently live on a boat with MUCH less storage than a “normal” house has. Our boat actually has less storage space than our RV did, so we had to downsize even more when we moved onto the boat.

Here’s why you may want to avoid a getting a storage unit or get rid of the one you currently have.

A storage unit isn’t an easy way to fix a problem.

Many people surprisingly get storage units because they think it’s easier to throw everything in a storage unit and pay the monthly fee rather than sorting through everything and finding a better solution.

Yes, it can be hard to go through what’s in your storage unit and get rid of things, but it only gets more difficult as time passes. You may have emotional attachments to some of the things, like if they came from a relative or friend who has passed away, but things won’t bring people back. You get to keep your memories and take them wherever you go.

The problem is that avoiding your storage unit creates a cycle that just never ends. It’s a temporary solution that gets harder and harder to deal with.

The reality is that many people put their stuff in a storage unit thinking that at some point they will go back to get their stuff, but eventually that $100 monthly payment looks better than the stress of clearing out the storage unit.

You probably have too much anyways.

Sounds crazy, but it really adds up quickly. Think about all of the plates, each piece of silverware, clothing, and everything else you own.

Also, according to Lark, U.S. children make up less than 4% of the children on the planet but have 47% of all toys and children’s books.

That is just crazy.

Given that the average home size has nearly tripled over the past few decades to 2,400 square feet, I really don’t know how people still have more stuff to store than what already fits in their home.

You really do not need all of that stuff in your house.

If you were to go room by room and think about the things you are actually using on a regular basis, you will probably be shocked by the amount of extra stuff you own. That alone should show you that paying for a storage unit is probably a waste of your money.

The items you want to store may never be used.

When many people put their belongings into a storage unit, most of the time they don’t even step foot in there again until they get rid of the unit.

This may be years and years down the line.

While it’s hard to find exactly how many units are abandoned each year, according to this study from Simply Self Storage, there are approximately 155,000 storage units auctioned off annually. That totals over $65 million in storage unit auctions! There is such a big market for abandoned units that there are even television shows about the people who buy them at auction.

You stored it for decades, never stepped foot into it, and then forgot about all of your stuff? And now, the storage unit companies are making even more money off of your unused and forgotten about items.

This happens time and time again.

And, it is a huge waste of money.

If you’re storing your belongings, there is a big chance that you’ll never use those items. After all, they are out of sight and out of reach, so how often will you actually use or even think about them?

Many people store things they don’t even want.

Surprisingly, many people store things they know they don’t need or want.

When you keep items like that in a storage unit, you are basically paying extra for unused items every month. That makes all of those unused things even more expensive.

A storage unit costs anywhere from around $50 to $200 a month, and this is for a non-climate controlled unit. If you want it to be climate controlled, you may pay significantly more to store your items.

Again, it can be hard to address every single thing you might be thinking about storing, but if you want to save money, you’ll need to take the time to realize which things you have that you know you don’t actually want or need.

It’s probably not worth it to store whatever you’re storing.

If you’re spending $100 a month storing things you don’t even want, you should think about how much it’s costing you in the long run.

You also have to think about the time and cost of driving back and forth from your storage unit even if you don’t do it regularly, and your storage unit may be far away like ours was. There is also the cost to move things, like if you have large items that need to be moved by a moving truck.

All of those costs add up!

Related: 30+ Ways To Save Thousands Each Year

By storing stuff, you’re likely to buy even more.

Instead of just making due with the items and space that you already have, a storage unit can actually cause you to spend more money. This is because you will be hoarding more and more things, and then you’ll just continue to put things in your storage unit because you have that extra space.

Would you go so far as getting another storage unit? I hope not, that would be an even bigger waste of your money.

Instead, you should make due with the space that you already have, and really think about every purchase you are considering.

You have time to donate or sell your stuff.

Some people have a storage unit because they think they don’t have enough time to donate, sell, or otherwise get rid of the stuff that they want to store.

Well, with the amount of time it will take to bring your items to storage, you could probably just get rid of them.

Plus, someone else may find a great deal of value in your stuff and/or you may help someone in need!

You can donate things to Goodwill or Salvation Army, and some charity donation centers even come to your home to pick things up. You can sell items on Facebook Marketplace or Craigslist. You can host a garage sale. This means you might even make some money on your unused things instead of spending money to store them.