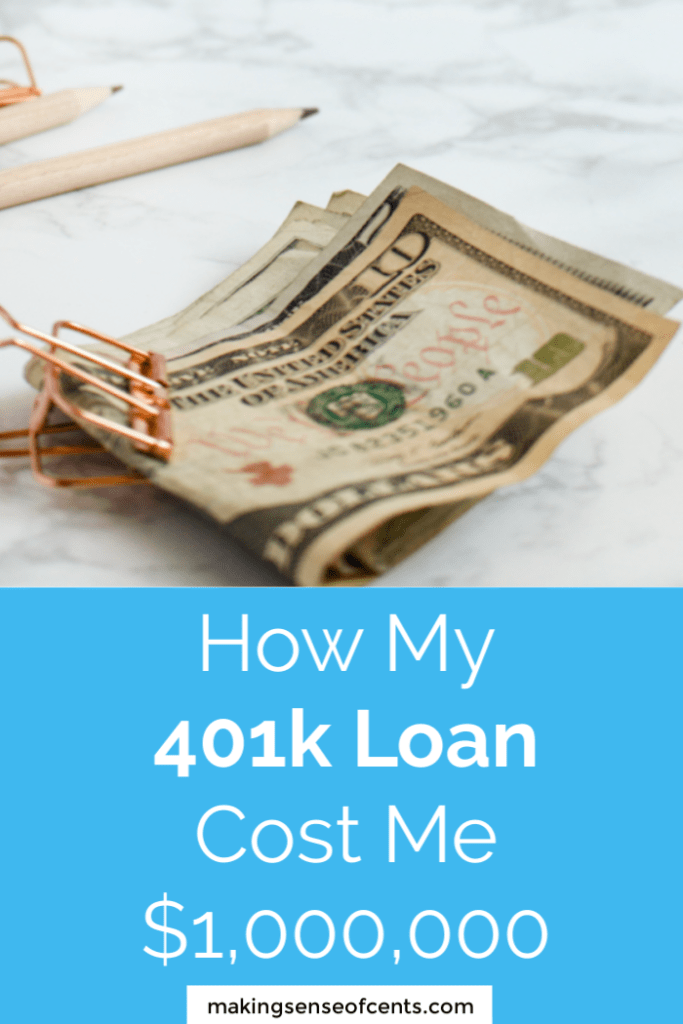 Today, I have a great guest post from a reader, Ashley Patrick. She asked if she could share her story with my audience, and I, of course, had to say yes! This is her personal story about how her 401k loan cost her a ton of money and why you shouldn't take be borrowing from your 401k.

You've been thinking about getting a 401k loan.

Everyone says it's a great loan because you are paying yourself back!

It sounds like a great low risk loan at a great interest rate for an unsecured loan.

But you know the saying “if it sounds too good to be true, it probably is”.

So you're thinking, what's the catch?

I take out a loan without having to do a withdrawal and I pay myself back. I'm paying myself back at a low interest rate right, so what's wrong with that?

You see, there are a lot of reasons to not take out a 401k loan and they all happened to ME!

Let me start at the beginning….

My husband and I bought our dream house when we were just 28 & 29 years old. This was our second house and honestly, more house than we really should have bought. But you know, it had a huge 40×60 shop and we loved the house and property. So there we were buying a $450,000 house with a 18 month old.

This house was gorgeous on 10 acres of woods with floor to ceiling windows throughout the entire house.

So there we were with a $2200 a month house payment, an 18 month old in daycare, and both of us working full-time. Within 2 months of us buying this house we found out I was pregnant again! We had been trying for sometime so it wasn’t a surprise but there was a major issue with our new dream home.

The layout didn’t work for a family of 3. It was a small 2 bedroom with an in-law suite that didn’t connect to the main house.

There was a solution though. We could enclose a portion of the covered patio to include another bedroom and play area and connect the two living spaces.

The problem was this was going to cost $25,000. We certainly didn’t have that much in savings and the mortgage was already as high as it could go.

So what were we to do? We have numerous people that were “financially savvy” tell my husband that we should do a 401k loan. We would be paying ourselves back so, we weren’t “really borrowing” any money. It was our money and are just using it now and will pay it back later.

Our first issue with the loan

This seemed like a perfect solution to our problem. So we took out a $25,000 401k loan in the summer of 2013. I checked the 401k account shortly after the loan and realized they took the money out of the 401k. I was very upset about this and thought there must have been some mistake.

So, nothing else seemed like a good option so we just kept the loan. Construction was finished just in time for the arrival of our 2nd child. The layout is much better and much more functional for our family.

Everything seemed fine and the payments came out automatically from my husband’s paycheck.

Then came the second issue with the 401k loan…..

In January 2014, my husband was laid off from his job. So there we were with a newborn and a 2 yr old in an expensive house and my husband, the breadwinner, lost his job of 7 years. You know the one he never thought he would lose, so why not buy the expensive house? Ya, that one, gone.

I cried about it but figured out how long our savings and severance package would last and knew we would be okay for several months.

Well, then we get a letter stating we have 60 days to payback the 401k loan, which at this point was over $20,000. We had made payments for less than a year out of the 5 year loan.

My husband didn’t have job yet and we didn’t have that much in savings. I certainly wasn’t going to use what was in savings to pay that loan either. I may have needed that to feed my children in a few months.

So, we ignored it because we couldn’t get another loan to pay it at this point.

Luckily, I married up and everyone loves my husband. So, he was able to find another job rather quickly.

We were thankful he had another job and didn’t think about the 401k loan again.

That was until a year later in January of 2015. Here came issue number three with 401k loans.

We got a nice tax form in the mail from his 401k provider. Since we didn’t/couldn’t pay back the loan in the 60 days, the balance counted as income. You know, since it actually came out of the 401k.

Then I did our taxes and found out we owed several thousand dollars to the IRS. We went from getting a couple thousand back to owing around $6500. So it cost us around $10,000 just in taxes. It even bumped us up a tax bracket and cost us more for taxes on our actual income as well.

I ended up putting what we owed on a 0% for 18 months credit card and chalked it up to a big lesson learned. I will never take out a 401k loan again.

In reality, my husband losing his job has been a major blessing in our lives. He is much happier at his new job. This also started my journey to financial coaching.

You see, when I put the taxes on the credit card, I didn’t have a plan to pay that off either. When I started getting the bills for it, I realized I had no idea how we would pay it off before interest accrued.

That led me to find Dave Ramsey. Not only did we have it paid off in a couple months, but we paid off all of our $45,000 debt (except the mortgage) in 17 months!

The true cost of 401k loans

Just recently I did the math and realized what our 401k loan really cost us.

We were really young for that $25,000 to earn compound interest. If we had left it where it should have been, we would have had a lot more money come retirement age.

We were 28 and 29 years old when we took that loan out. If we say we would retire or start withdrawing between 65-70 years old, then that $25,000 cost us around $1 million dollars at retirement age.

Life changes and now I am not working full-time and have an extra kid. So, thinking that you will pay it back later doesn’t always happen as fast as you think it will.

Something always comes up and is more important at that time. So learn from my mistakes and don’t take out a 401k loan.

Actually, start saving as much as you can as young as you can.

You may even be thinking that you aren’t quitting your job and will pay it all back, so no big deal, right? Actually you are still losing a ton of compound interest even if you pay the entire thing back.

The typical loan duration is 5 years. That’s almost a doubling of interest by the time it’s paid back in full. So, it may not be as dramatic as my example but you are still taking a major loss at retirement age.

The thing is, you have to figure in the compound interest. You can’t only look at the interest rate you are paying. You are losing interest you could be gaining at a much much higher rate than what you are paying on the loan.

Lessons Learned from my 401k loan

Some lessons I learned from taking out this 401k are:

So if you are considering a 401k loan, find another way to pay for what you need. Cash is always best. If you can’t pay cash right now, wait and save as much as you can. This will at least limit the amount of debt you take on.

Determine if what you want is a need or a want. If it’s a want, then wait. A 401k loan should be used as an absolute need and last resort.

It keeps you tied to a job for the duration of the loan which is usually 5 years. This could limit your opportunities and put you in an even bigger hardship if you lose your job.

Ashley Patrick is a Ramsey Solutions Financial Master Coach and owner of Budgets Made Easy. She helps people budget and save money so they can pay off their debt.

What do you think of 401k loans? Have you ever taken one out?