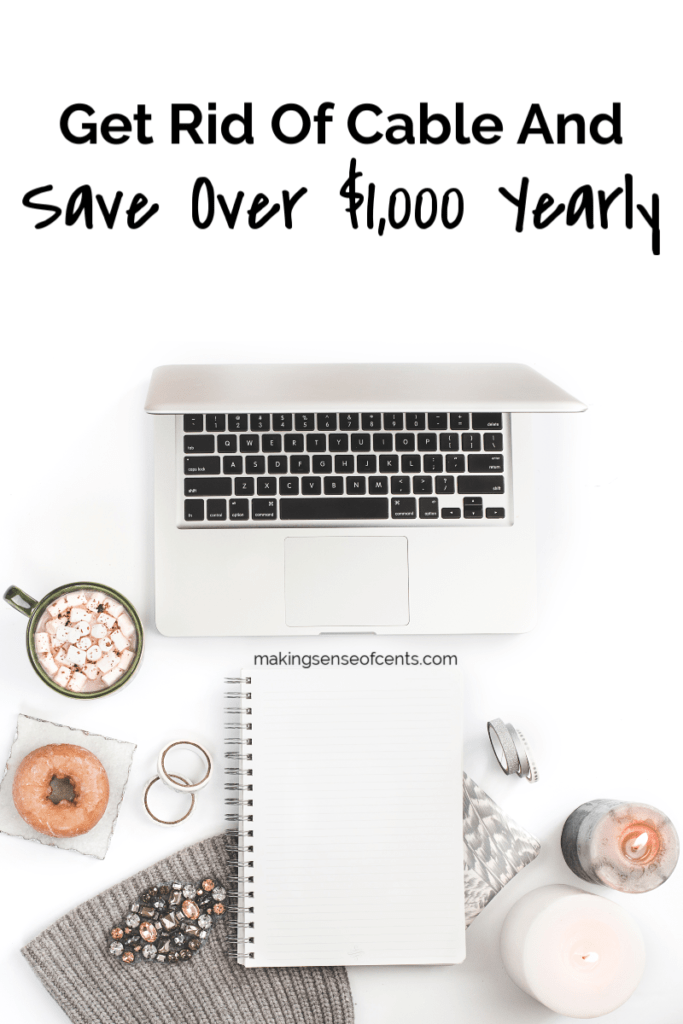 A few years ago we cut the cord and got rid of cable, and we haven’t missed it one bit.

We don’t even have Netflix, Hulu, Amazon Prime, or anything else. In fact, we haven’t even turned on our TV since September (or maybe it was August?!).

Out of all of the ways you can watch TV shows and movies, cable is definitely the most expensive option out there. And, according to USA Today, the average monthly cable bill in 2017 was $100.98. That cost will only continue to rise.

If you have cable right now, then you are likely spending $1,200 a year in cable. That’s a crazy amount of money! Just think of what else you could be doing with that money.

I know of many people who spend much more than this as well, and I even had someone recently tell me that they spend over $300 a MONTH on their cable bill. While that may seem crazy to you, I have heard of many people who pay this much money and more for cable.

By learning how to cut the cord and get rid of cable, you can save thousands and thousands of dollars over your lifetime. That money could be better spent on retirement, traveling, family, and more.

Even though getting rid of cable seems like an obvious way to save some money, it can still be hard. But, today I’m going to help you cut the cord and finally get rid of cable so you can start saving money today.

Related: 59 Things To Do Instead of Watching TV So That You Can Take Your Life Back

Cutting cable is easy with a digital antenna.

When you think about antennas, you probably think about the classic rabbit ears that are big and ugly. You probably also think about how the picture is never perfect and how channels can get blurry and almost completely fade away.

These days, antennas are all digital, and that means they are sleek and allow you to watch your favorite TV shows with crystal clear reception. There is no monthly cost, just a small upfront cost to buy the antenna. You just pay for the antenna once and then watch local channels as much as you want.

Before we sold our house and started traveling full-time, we bought a digital antenna, like this one. It’s an indoor one that sat behind our TV, it wasn’t ugly, and we actually would forget that it was there. Now, that is an affiliate link, but I didn’t even find out that I could be an affiliate until after we had bought and started using the antenna.

For around $20 (just a one-time fee!), we would get all of the local channels, and they all came in with great picture quality. Plus, getting rid of cable and using a digital antenna allowed us to save hundreds of dollars.

We no longer have the antenna, as we now have a smart TV that has an antenna built in and finds local channels for us – at picture perfect quality, all for free.

Getting rid of cable is easy with Netflix, Hulu, etc.

The only thing we have spent money on after cutting cable is Netflix. We don’t have it right now (we paid for a few months of it over the summer, but have since canceled it). We liked Netflix because it had almost everything we wanted to watch, and it’s nice because there are no commercials or waiting to see what happens after a cliffhanger.

The only bad thing about getting Netflix was that we were watching a little too much TV, so that’s why we canceled it. Deciding to cut the cord and get rid of Netflix was actually pretty easy, and I know that we can easily subscribe to it again if we want.

There are also many other options when it comes to still being able to watch your favorite TV shows after getting rid of cable so that you can have alternatives to cable TV. Beyond Netflix, there is Hulu Plus, Amazon Prime, pay for individual episodes of shows you want to watch, and more. There are TONS of options out there.

Get rid of streaming services if you aren’t using them or can’t afford them.

For anyone who has cut the cord and gotten rid of cable, streaming services are great options to help you save money while still watching your favorite shows and movies. The only problem with those streaming services, like the ones I mentioned above, is that when you start paying for more than one, the costs quickly adds up.

I know many people who subscribe to numerous streaming services to make getting rid of cable even easier. The costs are low, but when you start paying for too many of those services, you may be paying close to the same amount each month as when you had cable.

Here’s what these services are currently charging per month:

Those are only a few of the options out there. And, the cost of those services will vary with the number of devices you want to stream on, any extras you add on, and more.

These services are appealing because they cost much less than cable, and that’s why it is easy to subscribe to more than one streaming service. They also pull money out of your account, rather than bill you like cable does, meaning it can be easy to forget about which ones you are paying for and how much you are paying overall.

If you are really going to cut the cord to save money, then paying for too many of these services would be a very bad idea.

I recommend thinking about which services you use on a regular basis and get rid of the ones you aren’t using. Some may have the same shows, they may have gotten rid of the shows you watch, etc. And, if you’re paying for something like HBO Now to watch a favorite show, unsubscribe once the season has ended. The good thing about most of these services is that they don’t require a sign-on cost or a termination fee, so you can unsubscribe and rejoin as often as you want.

We don’t watch sports so getting rid of cable was an easy decision.

When we told people that we were getting rid of cable, many people asked us, “Oh, but what are you doing so that you can watch sports?”

Fortunately for us, we don’t watch any sports on TV, which meant that getting rid of cable was even easier.

Plus, if you have a friend who has cable, why not see if you can watch big games at their house. It could be a good way to spend time with your friends. You could even offer to bring over a snack and make a night of it.

Think about how much time you’ll save when you cut the cord.

One of the biggest problems with watching too much TV is that it is a HUGE time waste. I love a good TV show, and I honestly know that I was wasting a lot of time by watching too much TV. Actually, the average American spends around 35 hours each week watching TV! I don’t think I was ever watching that much, but I’m sure it was close.

Can you imagine what you would do with all of that extra time each week?

Not only will getting rid of cable save you a ton of money over the course of the year, deciding to cut the cord will also save you a lot of time. You can work on your side hustle, spend more time with your family and friends, get outside even more, etc.

Since we have cut the cord all together, we are spending more time exploring the areas we visit as we travel full-time. I am also able to devote more time to my blog without being distracted by TV.

How much money are we saving?

When we had cable, we still weren’t watching TV enough to get our money’s worth out of it. So, that money was just being wasted. It was actually rare for us to watch something that wasn’t on a local channel or Netflix. This was the main reason for why we decided to cut the cord, as it was useless and just another bill that we didn’t need in our life.

Now that we have cut the cord, got rid of cable and Netflix, we are saving around $1,300 per year.

I can’t believe we ever paid that much for TV!

Are you thinking about getting rid of cable? Do you think you could cut the cord? How much is your monthly cable bill?