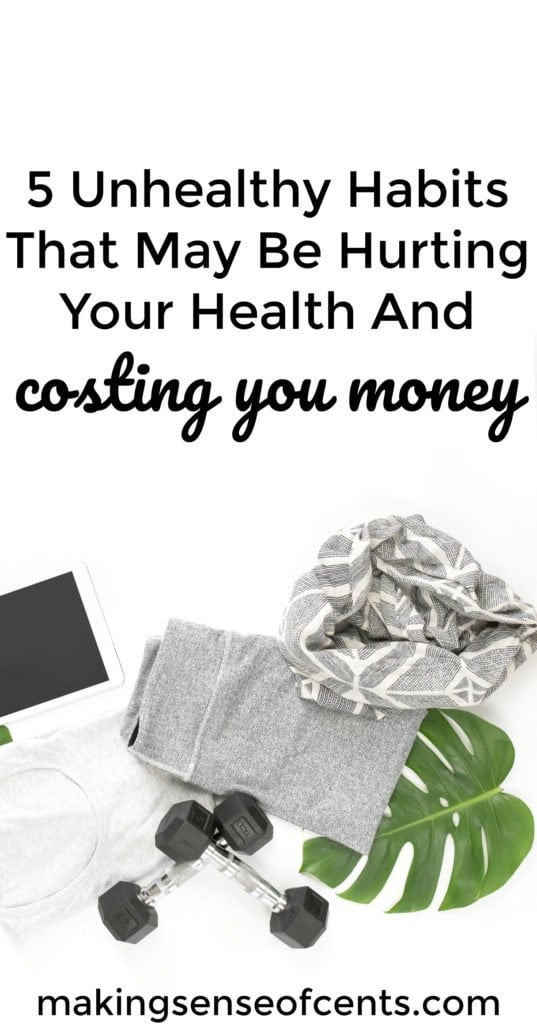 Recently, after watching a Facebook video about a person with lung cancer, I decided to read through the comments. I know, I know – this is never a good idea! There were people saying “this is all fake” and other comments that suggested these people gladly smoke multiple packs of cigarettes a week while believing cancer and other medical issues related to smoking were not real.

I couldn’t believe my eyes. My father passed away from lung cancer, so I can’t fathom how someone would believe this isn’t a real issue.

And, this goes for many unhealthy habits.

Many people either don’t realize or want to believe that some of their unhealthy habits may not only be hurting their health, but they may be costing them money as well.

Everyone has, at one point, an unhealthy habit they engage in or something they are wasting money on. I know I have, and for me that was tanning in a tanning bed.

Although I didn’t do it much, really just once is enough to cause health and financial harm. Using tanning beds damaged my skin and cost me money as well. It could have eventually led to something much worse as well!

Unhealthy habits are bad because they can begin causing you problems from the beginning leading well into the future, such as medical problems, medical debt, credit card debt, and more. They can prevent you from saving money and reaching a financial goal.

You may never learn how to save money if you are constantly drowning in these unhealthy habits.

They can also lead to a lot of stress and unhappiness.

Cigarettes are expensive and can kill you.

According to the American Lung Association, tobacco kills nearly 500,000 people in the U.S. each year and costs the U.S. $333 billion per year in healthcare expenses.

Smoking cigarettes can lead to many harmful side effects, such as lung cancer, heart disease, and many other medical problems.

I know and understand this problem because my father (who I was extremely close to) passed away from lung and brain cancer in 2008. He was an extremely healthy man, except for his serious smoking problem. We tried for a very long time to get him to stop, and it’s something I will always regret not trying hard enough for.

Due to this, I have never smoked a cigarette in my life, and I never will. There are just too many harmful effects of smoking.

Not only is it extremely unhealthy, it is also very expensive. According to Business Insider, cigarettes can cost around $5 in states such as Kentucky, and they may cost as much as $15 in New York. If you smoke a pack a day, that can be as much as $450 a month.

Another interesting statistic: According to GlassDoor, smokers earn an average of 20% less than non-smokers.

Tanning in a tanning bed is an unhealthy habit.

I used to go tanning, but I don’t anymore. I have heard too many horror stories about skin cancer and have seen too many pictures of people who have spent too much of their life tanning. Bottom line, it isn’t worth it.

In addition to being unhealthy, tanning can also be expensive.

I once overheard someone saying that they spent $400 a MONTH on tanning – I don’t even know how that’s possible. Whatever you are spending, it’s too much if you are just damaging your skin.

Instead, try to embrace the skin you have, or just use a bronzing lotion.

Gambling with your money.

Gambling at the casino and playing the lottery are both risky moves.

According to The Fool, in the U.S., people lost $142 BILLION gambling in 2014, and this statistic doesn’t even include what was lost playing the lottery.

And, according to Bloomberg, the average person who plays the lottery in the U.S. not only spends around $300 a year on lottery tickets, they also lose roughly $0.40 for every $1 in tickets purchased.

While I have gambled before, I have never been one to enjoy or do it much. But, I have seen people file bankruptcy after gambling too much, so the thought of losing money gambling is something that I’ve never wanted to personally experience.

Gambling can be extremely risky, which most often makes it an unwise financial choice. However, if you choose to gamble, you should always know your stopping point, and you should be able to afford to lose the amount of money you are gambling with. Keep in mind that casinos exist for a reason – they are making money because people are losing money.

Spending too much time and money on TV and social media.

TV isn’t always bad. I love a good TV show or watching a fun Youtube video (lately, I’ve been watching a TON of Sailing La Vagabonde). However, it’s all about being realistic and not letting it hurt other areas of your life.

The average person in the U.S. spends 34 hours each week watching TV and around three to six additional hours per week watching movies. Social media adds around 10 hours a week too, with some people spending much more than that on social media.

No matter how you try to explain it to me, I can’t imagine that being glued to your television or cell phone for over 40 hours a week is in anyway healthy.

Watching TV or spending too much time on social media can be an unhealthy habit because:

Instead of watching TV or getting sucked into a social media hole, try finding something else to do with your time. Spend time with your family, find a side hustle, go for a walk, read a book, give your dog some extra belly scratches, and more.

Find more ideas at 59 Things To Do Instead of Watching TV So That You Can Take Your Life Back.

Emotional spending is when you go shopping because you are sad, bored, feeling under-appreciated, or something else.

This is not good because if you are continually buying items to feel better about yourself, you may fall into credit card debt, spend more than you have, and you might just be buying things that you do not need just so you can buy something. Also, the cycle this can lead to is more stress and unhappiness, which can lead to more excess spending. As you can see, this is one of the many unhealthy habits that needs to be prevented.

To stop emotional spending, think about what it is that is really making you unhappy and come up with a better way to overcome your problem. You could clear your head by going on a walk, start writing in a journal, or find a friend or loved one to talk with. It may also be helpful to just avoid stores as much as possible so emotional spending isn’t an option. These are the best ways to stop this unhealthy habit so that you can learn how to save money.

Other unhealthy habits that might be costing your health and savings are: