Today, I have an article from Penny. Her family of six spends just $53,000 a year, with $22,000 of that going towards their student loan debt. Here is her story.

I’m Penny. I write a blog with my cousin, Rich. It’s called Penny and Rich. He’s rich. I’m poor. Get it? I’m a stay-at-home-mom with four kids. We have a household income of $43,000 a year and my husband and I have over $153,000 in student loan debt. Rich is a busy professional with a household income of $250,000 and he is well on his way to becoming a millionaire. This blog is our way of writing to and trying to understand each other, financially and otherwise.

We accumulated this massive student loan debt when my husband went back to school to become a chiropractor. He has been in practice almost six years now.

It’s doing better every year, but it’s taken a lot longer to grow a business than either of us thought it would.

We don’t regret taking out the loans, because we value having me staying home with the kids and family time over money and debt and everything. And, honestly, having the debt is not that big of a deal.

Rich doesn’t understand how my family of six can get by on such a small income, let alone tackle our massive student loan debt. But let me tell you, dear readers, how we are going to do it. Maybe you can make sense (that’s a shout-out to you, Michelle!) of our madness. 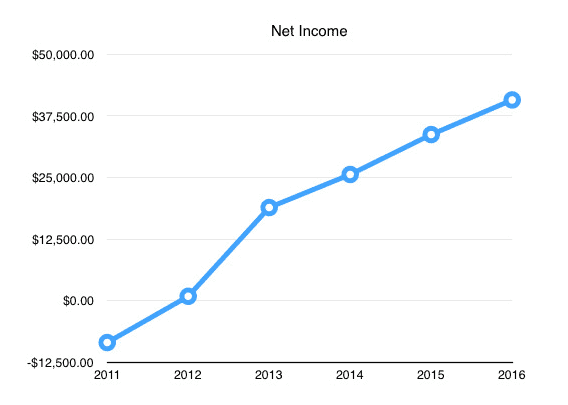 Very simply, we are going to put $22,000 toward the debt every year. Here is a spreadsheet of what that is going to look like: 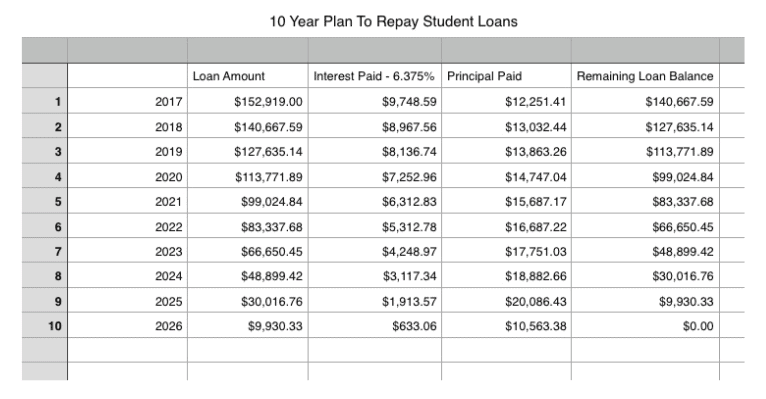 (Keep in mind that this spreadsheet is an estimate, because student loan interest is typically compounded daily, and I didn’t want to work through those sorts of calculations when creating the spreadsheet.)

$1,000 is taken out of our checking account automatically every month (for a total of $12,000 a year), plus an additional $10,000 will be thrown at it when we get our tax refund. This will eventually make a dent in that massive behemoth of a loan, and we will have it paid off entirely in 10 years.

Right now, it feels like we’re doing nothing more than throwing money at a wall. So much of it is going toward the interest. We have to pay $812 a month just to keep the loan from getting any bigger. Which sucks. At the end of the 10 years, we will have paid over $55,000 on the interest alone.

We’ve tried to refinance the loans, which is where all the really cool, fiscally responsible people are going, but they won’t have us given our debt to income ration (which, of course, makes sense on their end)…

But here’s another thing:

We are on a Income-Driven Repayment Plan with our lenders. This means that we make payments in accordance with our income. Right now, they are requiring us to pay:

And they will forgive any loan balance remaining after 25 years.

So, why are we putting $22,000 a year toward student loans when we technically don’t have to pay anything and the remaining balance will be forgiven anyway?

Well, let me tell you, because here’s the catch: We would have to pay taxes on the amount forgiven!

So, let’s say we continue to remain at this income level ($43,000), or thereabouts, for the next 25 years, and let’s say we pay $0 the whole time. At the end of 25 years, due to the constant growth of that friggin’ interest, the loan will have amassed itself to an astounding:

​Thanks to this little handy Tax Calculator, I can calculate that we would have to pay $229,545 in taxes on that amount, which is actually $9,545 more than what we would pay doing my little 10 Year Repayment Plan thingy.

(Plus, we’re the ones who took out the loans, we’re responsible for paying them, and we really do want to be able to pay them back. Blah, blah, blah.)

So, now, a question you’re probably asking yourself is:

Okay, so now you’re going to have some more questions here. And your first question is going to be:

How did you spend only $528 in food to feed your family of six?

Well, dear readers, here’s our deep, dark secret… since we are low income, we get the majority of our food covered by Food Support. I’ll write more about that at the end of this post, but, for now, there you have it. We get Food Support, and this enables us to put more of our money toward student loan loan debt.

Which will bring you to your next question:

Where are those student loan payments anyway?

For some reason, I like to keep them separate in my head (and therefore in this post). Since we are not *technically* required to pay them, I see it as a *somewhat* nonessential expense (although, really, it isn’t, I know this).

So, with the loan payments, our grand total of expenditures in 2016 was actually:

Which brings us to your next question:

My second deep dark secret, dear readers, is… we get a massive tax refund every year.

Let’s look at these numbers:

There, now we’re ahead of the game.

Let’s put together some fun charts on this. Here’s a look at what we spent our money on in 2016: 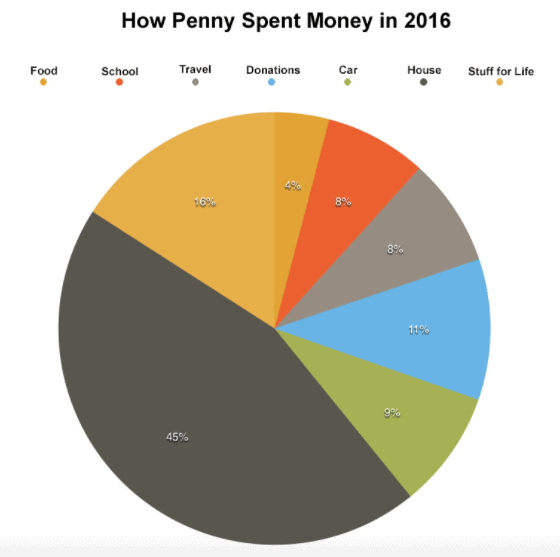 Okay, and now let’s see what it looks like with the student loan amount thrown in: 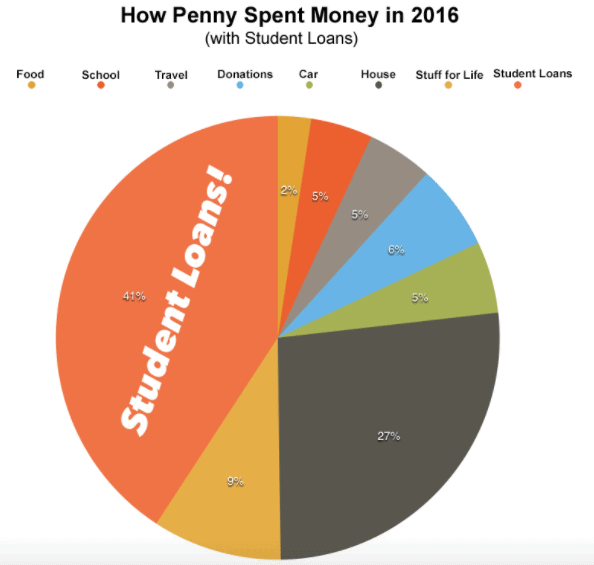 Pretty crazy, huh? Good thing I have that 10 year plan!

As I mentioned earlier, our family gets food support. We’ve been getting it for about eight years now, ever since my husband started chiropractic school. We could have gotten it before then, when he was a Catholic elementary teacher making only $18,750 a year, but I hadn’t known it was available to us. I didn’t realize we were poor.

When we first started getting food support, I wasn’t sure how to feel about it. I was kind of embarrassed. I felt like we were too good for it, like we were above it.

Now, I receive it with gratitude. I know that we are not any better or worse than anybody else getting it. I am no longer too proud.

Could we get by without it? Yes.

Do we use what we save on food to help pay off our student loan debt? Absolutely.

Is that fair? I think so.

I recently read this amazing book called The Art of Asking by Amanda Palmer. In the book, she writes this little tidbit about how Henry David Thoreau’s mother would bring him donuts while he was squirreled away working on Walden:

The idea of Thoreau gazing thoughtfully over the expanse of transcendental Walden Pond, a bluebird alighting onto his threadbare shoe, all the while eating donuts that his mom brought him just doesn’t jibe with most people’s picture of him as a self-reliant, noble, marrow-sucking back-to-the-woods folk hero.

I think a lot of the time, people might expect those getting government assistance to look and act a certain way (poor), and that they shouldn’t be able to enjoy any kind of treat or luxury (like going to Harry Potter World) because of that. Kind of like how we expected Thoreau to look when he was living at Walden Pond.

It’s not the act of taking that’s so difficult, it’s more the fear of what other people are going to think when they see us slaving away at our manuscript about the pure transcendence of nature and the importance of self-reliance and simplicity. While munching on someone else’s donut.

I’m not working on writing a literary masterpiece here, of course. I’m just trying to raise my kids while my husband tries to grow his business… and, yes, all while we’re munching on someone else’s donut.

And I’m okay with that. I’m learning how to take the donuts.

Unlike before, I am slowly starting to realize that I am (kind of) a poor person. However, I still don’t feel like one (I think being “poor” has less to with money than one might expect). In many ways, I live a life similar to wealthy people, just one with a lot more support: We send our kids to a private school (thanks to a scholarship), we eat healthy, organic food (thanks to food support), and we own our own home (thanks to our moms co-signing on the mortgage).

Should my life look differently? Should I look like I am poor and suffering? Or should I gratefully take the donuts and do what I can with them?

And is that fair? A lot of people, like my cousin Rich, have worked hard to get where they are and for what they have acquired. But have they worked any harder than my husband worked in chiropractic school and in starting his own practice? Probably not. Do busy professionals work any harder than construction workers or a teachers do?

It’s all relative. Different people have different interests and values and jobs and income levels. And some people just get lucky. (Even Rich recognizes that we all have a role to play, and he wrote a parable about how we are different types of squirrels and our conversations make the “forest” a better place.)

We all need to take care of each other, in any way that we can. We belong to each other.

And that’s a good thing.

Here’s another excerpt from The Art of Asking (I can’t recommend this book enough) that sums this up:

Our first job in life is to recognize the gifts we’ve already got, take the donuts that show up while we cultivate and use those gifts, and then turn around and share those gifts – sometimes in the form of money, sometimes time, sometimes love – back into the puzzle of the world.

Our second job is to accept where we are in the puzzle at each moment. That can be harder.

I recognize that our circumstances are unique. There probably aren’t a lot of people making $43,000 and putting $22,000 toward student loans every year. I hope to be at the another place in the puzzle in the future, a place where I can share more of my gifts and take less. Until then, I think it’s good to have conversations like this… conversations about money, about life, and about our place in it all.

Low-income people are not usually represented on personal financial blogs. I want my cousin, Rich, to understand what it’s like, and I want you, dear readers, to understand as well.

And along the way, we all might learn something from each other.

Do you have any questions for Penny? What are you doing to pay off your debt?