Do you think there’s a line that a person can cross when their money saving ways become too cheap, eventually turning into theft? 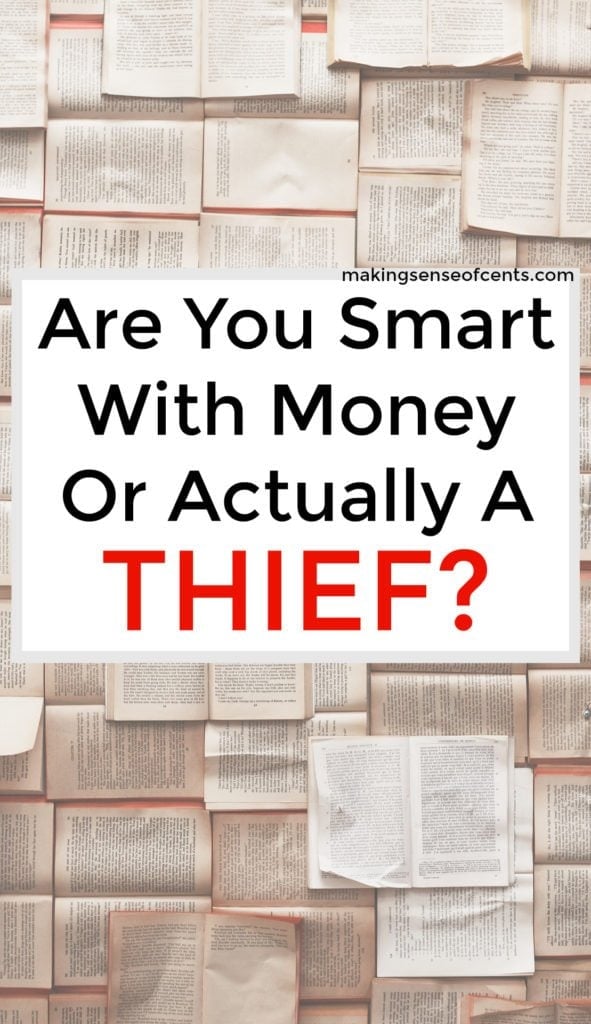 I don’t believe there is anything wrong with saving money (this is a personal finance blog after all). But, I do wonder how far people will go to save money – whether it be $1, $2, $100, or even more.

However, when does frugal living or cheapness cross the line and turn into stealing? I would love to hear your opinion on each of the situations below. Leave a comment and let’s start a fun discussion.

In my free Facebook community, I asked readers “When do you think frugal living or cheapness crosses the line and turns into stealing?”

Here are a couple of the responses I received:

“My mother always taught me that there is nothing wrong with being frugal. Living within your means, checking for the best prices, using what you have, fixing what you have, taking hand me downs, things like that are all legit. But for my mother there were only two categories, frugal and cheap. Cheap is when you try to talk down every price you ever get or take and want everything for free. Example: You go to a garage sale. Something is marked $1 and you offer a dime. You don’t know why someone is having that garage sale. You call a friend, a plumber, for a repair and try to talk the price down to almost nothing. I agree with my mother. She told me, ‘if you are taking the food off someone’s table’ you are going too far. All of us, after all, need each other to make a living. I’ve always tried to remember this because although I want to be frugal, I also want to be a good, decent and kind person. That’s my take.” – Mary Ann Davis

“It becomes stealing when your gain comes at someone else’s expense. Being frugal is choosing to spend carefully. Any expense of being frugal is your own. For example, eating out less or not at all. The only person this affects is you.” – Lauren Moore

Here are some different circumstances in which frugality or cheapness may turn into theft, followed by more of your thoughts.

This is when you are using someone else’s wi-fi so that you can get on the internet for free, and it’s one that many people are guilty of.

Some of you said that if there is no password to the internet account, then it’s fair game for anyone to use.

However, I think you should always pay for your own wi-fi. You might be slowing down the internet for someone else, and they might not even realize that their wi-fi isn’t password protected.

Always protect your wi-fi account! – I think I’ve mentioned this before, but when I was in college someone had unprotected wi-fi and it turned out that their neighbor was using it and searching for something illegal. The SWAT team showed up at their door, created a huge scene, took the computers, and destroyed the person’s house all because of the neighbor’s internet searches.

Sharing accounts with others.

This is where someone has an account and multiple people/households share the account so that only one person is actually paying for the service or product. I have heard of many people doing this with Netflix.

Drinks at a restaurant.

Signing up for something to get something for free.

Another example is having your makeup professionally done at a department store makeup counter or beauty supply store. Many of these places offer free makeup applications as long as you buy something from them. Some require that you pay for a product upfront, whereas others give you the “option” to pay at the end.

I have heard of some people getting a free makeup application knowing full well that they do not plan on buying any makeup afterwards or even tipping.

Learn more at How To Get Rid Of A Timeshare – Stop Wasting Your Money!

This is when you go to a restaurant and take a bunch of condiment packets so that you can bring them home to stock your fridge or pantry.

I have received extra packets before, such as from a takeout order, but I have never gone out of my way to take condiments.

Reading books and magazines but not paying for them.

I remember one occasion where I had to do some research and went to a local bookstore to find the book I needed. When I found what I needed, it was obvious that the book had been read before. There were big fold marks on the outside as well as on the inside (it looked like someone folded the book in half), and there were even stains on and in the book. That is just sad!

I see nothing wrong with quickly glancing at a book or magazine to determine if it’s for you. However, if you are reading the majority of the book while not paying for it, especially if you’re damaging it, then I think this does cross the line into stealing.

If you enjoyed or used the book enough to read almost all of it, then you should either buy the book or just borrow it from your local library.

Not telling wedding vendors that you’re having a wedding.

I didn’t do this with my wedding, but whenever I read wedding budget posts, almost every article said to leave out the fact that you are having a wedding.

Some of these writers recommended you tell the vendors that you were just having a party. Because prices can increase significantly when you mention the word “wedding,” saying that you are having a “party” might save you some money.

I think this is a difficult one. I’m not sure if this is stealing because technically you are having a party (a very specific party that probably involves a marriage ceremony). However, you are purposely leaving out information.

I think that leaving out the wedding part may cause you to miss out on some important aspects or special touches that can be important to your wedding. And, those higher prices are usually because there is extra work vendors do to prepare for a wedding, such as with a photographer, DJ, event planner, etc.

What are your thoughts on this situation?

Disputing items on your credit card.

When it comes to your credit card bill, in many cases you can dispute a transaction that is less than $25. Often, your credit card company will just automatically refund the money because it’s not worth their time to investigate the problem.

I have heard of people who regularly dispute many transactions and take advantage of this.

I don’t do this. If you have received the product or service and have no reason to dispute the purchase except for that you want to save money, it’s not saving money – it’s stealing.

Taking items from a hotel room.

Have you ever stayed at a hotel and cleared the room out before you leave? Maybe you took the towels, soap, toilet paper, plates, cups, decorations, and so on.

Complaining excessively to get what you want.

Would you ever complain so much to get what you want, even if it meant that someone would get fired? I saw this at my job when I worked in retail, and I also see this when I am out shopping at other places. If you have ever worked in retail, you start to notice how customers treat employees at other stores.

Sometimes people will lie, call others names, yell, and just be all around mean.

Yes, I know you should always treat the customer as though they are right.

But, I have seen this happen multiple times, and it’s infuriating. When I am out and see this happening, I do my best to defend the employee (if the employee is correct, let’s be honest – the employee isn’t always right either), because I just CANNOT stand it when people lie.

To get back to the topic – Sometimes a customer will make a complaint so that they can get a discount even if it means that they have to lie and get an employee fired.

I have even seen employees run away and cry because of how adamant the customer was about getting a discount.

Usually these fake complaints were followed with “Don’t I get a discount or get it for FREE?!”

Using an item and then returning it.

Have you ever seen the episode of King of Queens where Carrie starts “buying” a lot of high-end designer clothing and ends up with a room full of it? She had thousands of dollars worth of clothing, and she even came up with a system of buying and returning everything so that she never actually had to pay for the items.

Here’s another example of this same sort of thing: Taking an item that has broken, buying the exact same item from the store, then putting the broken one back in the box and returning it so you can have a working one at no cost to you.

I also know of someone who purposely broke an electronic by throwing it down the stairs because their warranty was about to be up and they wanted a new one. This person said that because they bought the warranty, it wasn’t stealing.

Movie theaters can be expensive. Not only are ticket prices high, but food and drinks as well.

This has led to many people sneaking their own food and drinks into the movie theaters instead of purchasing it there. Some will sneak it in their purses, pockets, and more.

Do you think this is considered stealing?

Or, maybe you have bought a child or senior ticket online or at a kiosk instead of paying the full ticket price.

Leaving a bad tip to “save money.”

I know that different countries have different tipping rules, but if you are in the U.S. where the service industry relies on tips, then I think that you should be budgeting a tip into the cost of your meal.

For this scenario, let’s assume the service you received while having your meal was good. In this case, if you cannot afford the tip, then you cannot afford the meal. You should always budget accordingly when going out to eat, and rather than leave a bad tip, chose something on the menu that is less expensive.

I read an article once about tipping in the U.S. where the author said that they had no problem leaving only a 5% tip each time they go out, even if the service is phenomenal. The person said that even though they couldn’t leave an appropriate tip, they still had a right to go out to eat.

In this situation, would you find something less expensive on the menu, leave before ordering once you realized you couldn’t afford to tip, or just leave a bad tip?

Other frugal, cheap, or thief situations.

Here are some other situations that readers from the free Making Sense of Cents Community brought up:

Have you ever done any of the above? What do you think of these situations? What other examples can you think of?