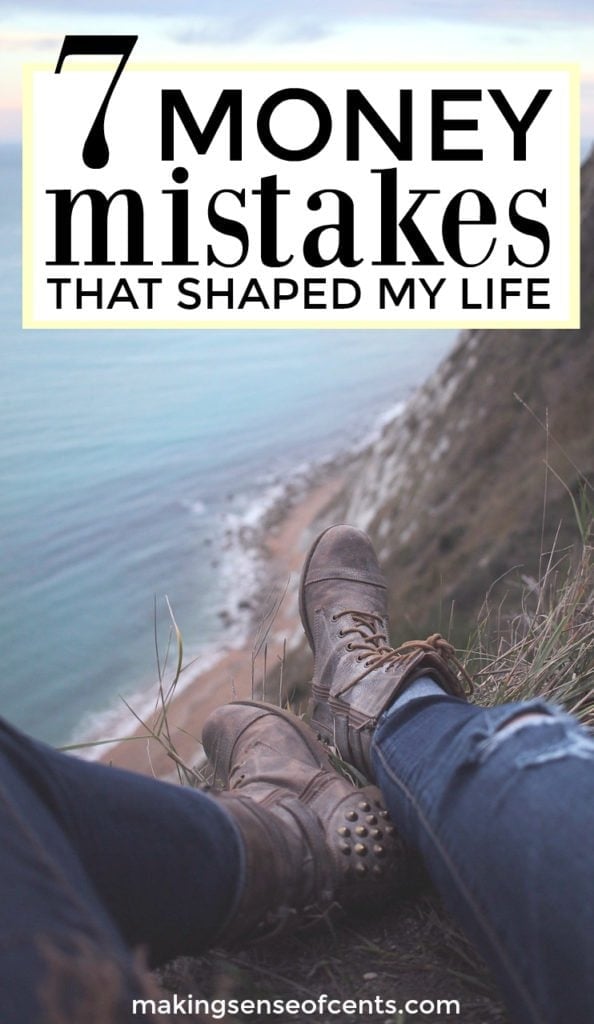 Some say that the best way to learn a money lesson is to learn from your past money mistakes, after all, you live and learn!

Still, no one wants to make money mistakes, but if you’re going to get anything positive out of a money mistake, it might as well be a lesson in becoming a better money manager.

Learning from your money mistakes is extremely important, because no one wants to make the same mistake again.

Sadly, though, that is what seems to happen for some people. It can be easy to fall into the same money mistakes over and over again if you do not stop to reflect and learn from your past money mistakes.

And, I’m not afraid to admit that I’ve made plenty of these mistakes in the past. I’m not perfect, and everyone has made them. Instead of running away from your money mistakes, I believe that it’s best to face them and learn from them, so that the same money mistake or something similar never happens again.

Today, I’m going to talk about the seven money mistakes I’ve made in my life and how they have shaped me into a better money manager. When it comes to money, I’m a very different person from just a few years ago. It just goes to show that you can completely turn around your financial situation by learning how to take control of your personal finances.

Here are some of the money mistakes I’ve made and what I’ve learned from them.

I took out extra student loans.

I didn’t take a lot of extra student loans out each semester, but overall, I ended up taking out a few thousand dollars more to use on everyday expenses.

But still, this is a mistake I wish I wouldn’t have made. I was working full-time, so I should have learned how to manage money better instead of looking at my student loans as free money to spend.

Due to having my high interest rate student loans, I’ve learned to never again fall into that trap. I know that student loans and other forms of debt (such as credit cards) are not free money and that you’ll eventually have to pay them off.

While this is a given for some, many, many people take out more student loans than they actually need and live off of the difference, even though they do not really need to.

Rather than adding to your student loan debt, you can always find more ways to make money or lower your expenses so you don’t feel the need to take out more high interest rate student loans to pay for your living costs.

Read more at How I Paid Off My Student Loans By The Age of 24.

One of the biggest money mistakes I’ve made is that I bought a brand new car at the age of 18. Now, I don’t care if someone buys a new car, but not many 18 year olds can realistically afford a brand new car.

And, I definitely wasn’t one of those people who could truly afford one.

But, I did it anyways.

At that point, I had already been working full-time for a few years, and I must have thought that I was so awesome and deserved it, haha.

Well, I can now look back and say that my $400 monthly car payment was not awesome.

I spent a large percentage of my monthly income on my car payment, and it stung every single time.

What I learned from this is that you always need to be more realistic with your spending and saving. The $400 monthly car payment made me live paycheck to paycheck. I could barely afford anything else, but somehow I still had to manage other monthly costs, such as rent, food, going to college, and more.

It was tough and definitely not worth it. I would never want to go through that again and would have been much better off if I would have just bought a more affordable vehicle.

I waited to start investing.

This is exactly how I used to feel. Although I used to be a financial analyst (I dealt with businesses, not so much on the personal side), investing my own money was always something that I was unsure of. It always seemed like there were too many decisions, too many questions about how to invest, and I was too scared to invest my own money.

If you are like I was, and many others out there, you also may not know how to start investing your money.

Investing your money can be a scary, stressful, and overwhelming topic to tackle. You want to invest so that you can:

Read more at The 6 Steps To Take To Invest Your First Dollar – Yes, It’s Really This Easy!

I spent way too much money on clothing.

When I was younger, I worked at a clothing store for around 5 years and often spent more money on clothing than I would actually earn, even though I worked full-time!

We got a decent discount on what we purchased, so I just couldn’t pass up a good “deal.” It was really hard to not buy things each time I worked.

When I look back on the situation now, I can’t believe I survived without going into credit card debt. That was just a disaster waiting to happen.

I now hardly spend any money on clothing, and I’m happier than ever. I’ve learned to be happy with what I have and not to spend so much time and money finding things that are trendy, instead I focus on quality and things that I will actually wear for a long time.

I cared too much about keeping up with others.

I used to really care about what other people thought of me. And, I was always buying the latest and greatest because I thought I needed to.

I know this is a common problem for many.

Whether you are five years old and want that new toy everyone is playing with, or if you are 50 years old and are feeling the need to upgrade your house, car, etc., everyone has experienced wanting to keep up with someone else.

The problem with this is that keeping up with others can actually make you broke.

And, I used to be the same way. I used to care too much about the things that I owned, worrying about what other people were able to buy, thinking that I deserved things, and so on.

While this didn’t lead to credit card debt, it did lead to me having high monthly expenses and living paycheck to paycheck.

When trying to keep up with the Joneses, you might spend money you do not have. You might put expenses on credit cards to (in a pretend world) “afford” things. You might buy things that you do not care about. The problems can go on and on.

This can then lead to an excessive amount of debt and potentially set you back years with your financial goals, if not decades.

Now, I’ve learned to not care about what other people have, to not feel the need to compete with others, and I’ve learned to only buy what I actually want. And, I’m happier than ever.

I thought everything I was doing was normal.

Before learning to be a good money manager, I never really tried that hard when it came to my financial situation (at the time, I thought I was trying my hardest!) because I thought it was all normal. It seemed like everyone had credit card debt, student loans, a car payment, cable, an expensive cell phone, and more.

Due to that, I thought all of my money mistakes were just normal life and that I would somehow get through it because everyone else seemed to be managing similar choices.

Well, that was a big mistake. That all led to me living paycheck to paycheck and feeling financially stressed out.

I now know that I don’t want to be “normal,” especially if that means that I would never reach financial freedom.

Now, I want to retire early, travel full-time, be debt free, not keep up with others, and so on. It’s crazy how different I am about money and life from just a few years ago!

I took part in emotional spending.

Emotional spending is something I would take part in a lot. If I had a bad day, I would buy something to make me happy. To make up for my dislike of my day job, I would make big purchases and justify them by saying that I worked hard for the purchase.

Emotional spending is a bad money habit that many people take part in. It’s one you should stop now, because it doesn’t cure any problems.

According to NerdWallet, the average U.S. household (who has debt) has an average credit card debt of $15,611, and I’m sure some of that is due to emotional spending.

Emotional spending occurs for many different reasons. You may have had a bad day at work, a fight with your loved one, and so on. You might even be spending because you are so stressed out about the amount of spending you have done.

To end your emotional spending habit, I recommend:

What money mistakes have you made? What did you learn from them?