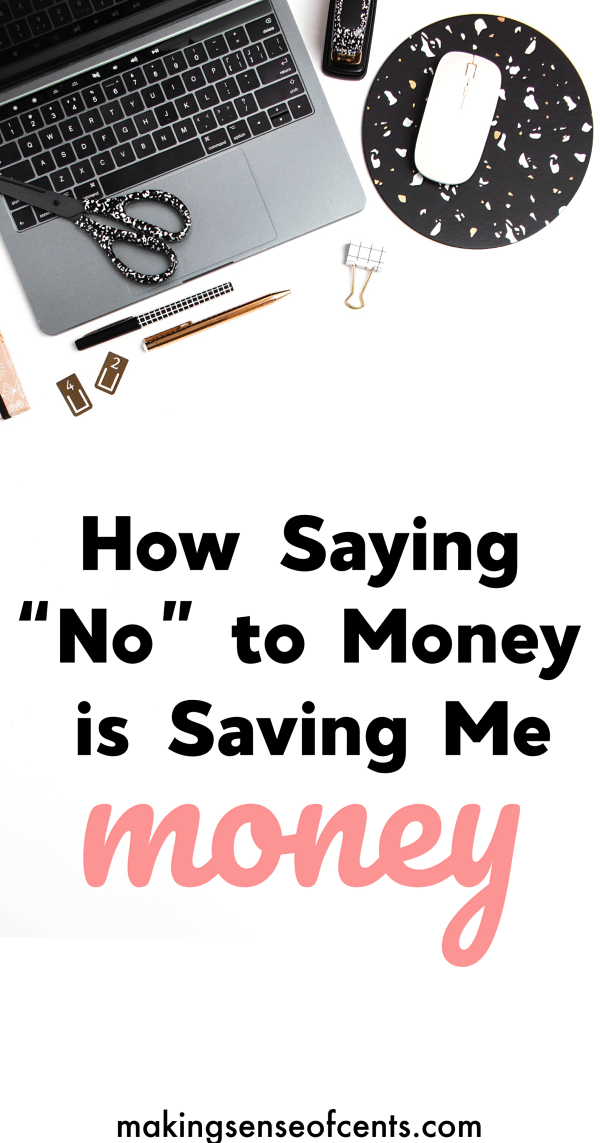 Today, I have a post written by my sister-in-law. It’s a great read and I recommend reading Is Your Job Worth it? How Much Is It Costing You? as well.

I know that title sounds pretty contradictory, and I could have used something like, “Just Don’t Do It” or “Say No, Now.” But, before I explain my reasons for saying “no” to making money, let me introduce myself.

Hi, my name is Ariel. My husband and I both work full time, go to school for graduate and undergraduate degrees, and have three kids.

It really is as exhausting as it sounds, but I like to live my life on the chaotic side. We bought our house when we were just 20 and 21 years old and had a one year old daughter. He was working two jobs and going to school full time, and I was working two part time jobs.

We budgeted and penny pinched, but money was so tight that we actually qualified for a small amount of food stamps each month. Buying our home was one of the best decisions we’ve ever made, but it really made getting by tough.

As the years progressed we went on to have more kids, he finished his undergraduate degree and I began working on mine.

During the past 11 years, each of us has usually held between two to five jobs at any given time. On top of that, we relied on credit cards and borrowed money from family. Everything is paid off now and having that weight gone feels so good. Even now, when we are able to save money and spend it on things like the occasional family vacation, talking about our financial past is really tough for me.

We were really young when we started out, and taking on all of those jobs was the right thing for our family. As we became more financially solvent, we kept saying “yes” to more and more work.

I started saying “no.”

I finally realized that the stress put on us to make money was actually causing us to spend more than we should have.

So one day, fairly recently, I decided to start saying “no.”

The stress of our jobs kind of hit me over the past couple of years. Again, we have three kids and I like to be involved in their school and extracurricular activities, which takes time. I was feeling upset with myself because I wasn’t able to make the same kind of financial contribution to our family that my husband did with his full time job. On top of being in school full time, I took on babysitting jobs, cleaned houses, took on more hours at my current jobs, and did whatever I could to add to our income.

At first it felt great. I could stop for coffee in the morning, we could go out to eat, I didn’t think twice about buying the kids what they wanted, and started spending a lot of money on frivolous things like having my nails done.

At some point I started thinking about all of the things I used to do to save money:

Those things were necessary, but they felt good.

I had stopped doing all of those things because we were making more money, but all of the money we made wasn’t being saved or even used on meaningful things. There were a couple of months in the past year when I was working five jobs for a total of 50+ hours per week. Some of these jobs, like in home child care, didn’t even pay minimum wage. I began to realize that all of the spending I was doing was to compensate for the time I didn’t have.

With the decision to stop taking on more hours, and saying “no” to additional job requests, I have found myself with the time to make dinner, which is something I genuinely love doing for my family. I have the time to meal plan again, and not only grocery shop, but actually use all of the food in my fridge. There is nothing more depressing than throwing away food.

Life is still chaotic with school and kids, but this summer we are planning on working a little less and enjoying our time with one another. We are starting a vegetable garden, will have the time to find free activities in our area, peruse books at the library, and maybe catching up on sleep will allow us to spend less money on coffee.

Could saying “no” to making money help you to save more money? Do you find yourself spending more money due to your job?