“I don’t want to save money and retire early, because I’ll be bored.” 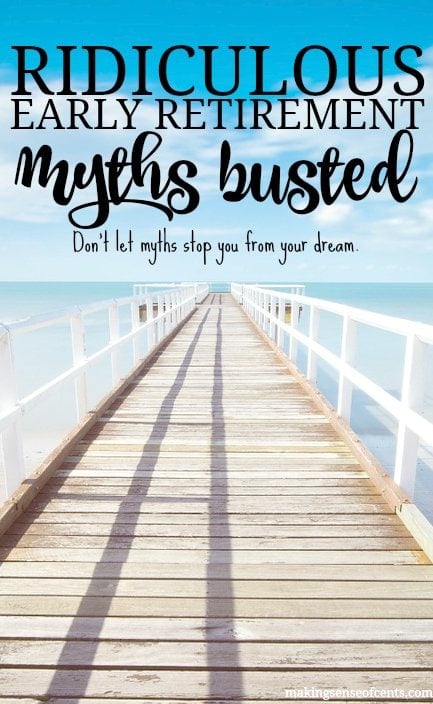 The two myths above, along with many, many others, are things I often hear people say when they talk about retiring early.

I’m not sure why there are so many negative feelings about early retirement, because I personally love the idea of people striving to retire early and not be “normal.”

I mean, just think about it: Don’t you want to retire early, so that you can have the financial freedom to do whatever you want to do?

What’s bad about that?

Whether you want to travel, continue working, spend more time with family, or whatever else, retiring early gives you the ability to choose.

Plus, early retirement can be whatever age you want it to be, it doesn’t have to be that you retire early at age 30. If you are able to retire at age 60, that’s awesome! The point is just to beat the “norm.”

Due to the above, I think it’s obvious that more people should make saving for retirement a priority.

While I have not retired early (yet!), it is a goal of mine.

Now, don’t get me wrong: I absolutely love life and my online business. However, I would rather be safe, because you never know what may happen later in life. As you know, I’m a worrier and I would much rather be safe than sorry. Something medically may occur, the industry may change, I may change, and so on.

You just never know what may happen in the future!

Related: Reaching Financial Independence IS Possible And Here’s How You Can Do It

Now, I’m not going to automatically assume that extreme early retirement is for everyone. However, the majority of the population does not seem ready for retirement at any age, so to discount early retirees altogether just seems crazy to me.

If you are new to the topic of early retirement, here are three great articles on other websites that I highly recommend:

Below are several early retirement myths I have heard along with why I don’t agree with them.

1. Myth – “You can’t have fun, while saving for early retirement.”

Most of you know that this is a myth I despise.

Just because you are saving for retirement aggressively doesn’t mean you are eating Ramen noodles for breakfast, lunch, and dinner. However, this is a myth that is often associated with early retirement.

Sure, a person who seeks early retirement or who has already retired early may be frugal, but I highly doubt that the majority of early retirees live boring and uneventful lives.

There are plenty of ways to have frugal fun, eat on a budget, and so on. You can even see the world, while saving for early retirement, too. We currently live in our RV, while traveling North America (yes, I know that’s not the world), and our budget is the lowest it has ever been.

Remember, the best things in life are free. The outdoors, spending quality time with those you love, laughing, and more are all FREE.

Related: What Is Financial Independence, Retire Early? Answers To FAQs About FIRE

Yes, this is a myth I’ve heard as well. I would think that people would have a completely opposite view of those who aim for early retirement, but that doesn’t seem to be the case.

Those who strive for early retirement are not lazy. I believe early retirees are hard workers who want to live life on their own terms.

An early retiree isn’t just going to sit around all day. Even if that’s what they want to do, who cares?! That doesn’t mean if you were to retire early that you have to be bored.

You could volunteer, pursue a passion, find fun things to do, take up multiple hobbies, and more with all of the extra time you would have after retiring early.

Heck, you could even continue working, if that’s what you truly desire. Early retirement just gives you choices in case something changes in the future.

This is a huge myth. I spend all day with my husband, because we work from home, and I can tell you that I don’t hate him (haha!). Plus, we even live in a small RV and I still don’t hate him!

If you do end up getting sick of spending 24/7 with your spouse, you can always find ways to have time to yourself. You could volunteer somewhere, do some solo traveling, go on a daily walk by yourself, and so on.

This is a weird myth that I hear all the time about early retirees. Many like to assume that early retirees haven’t thought about possible future expenses, such as from having children, health insurance costs rising, inflation, and more.

However, if someone has planned for early retirement, why would they just skip over planning anything else?

A person, who is planning for early retirement, is thinking about these things. While no one’s calculations are going to be exactly correct down to the penny, it is possible to factor in possible future expenses.

There are many people out there who don’t believe that early retirement is possible. I believe this has a lot to do with how everyone thinks you should only save 5% of your income so that you can retire between the ages of 65 to 70. However, this is a huge problem, because many people aren’t even saving that amount!

By saving enough of your money and living off a designated percentage of your savings or invested income each year after you retire early, you will find that early retirement is possible.

Before throwing the whole idea out, you may want to look into how it may be possible for you.

I recommend checking out the article on Mr. Money Mustache (this blog is a MUST read, if you want to retire early) The 4% Rule: The Easy Answer to “How Much Do I Need for Retirement?”

Here are some articles that may help you save more money, so that you can retire early:

Are you interested in early retirement? Why or why not? When do you think you’ll retire?