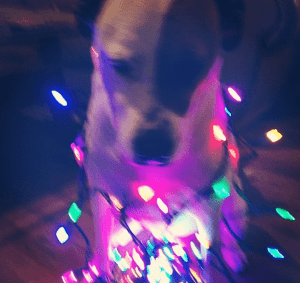 Happy Monday everyone! Start of the workweek yet again. To the left is a Pinterest FAIL that I did of my dog. Does not look good at all and she looks so depressed and mad at me for making her do it haha.

I’m also looking for guest posters for when I’m out of town next week. I know this is extremely short notice, and while I do have posts scheduled for next week, I just thought that if I could get a couple of guest posts then I would rather have those scheduled to be posted.

I would prefer the posts to revolve around money of course, but maybe about how you save on vacations, what side jobs you have, and/or what your long-term goals are. Is anyone interested?

I am super excited for our vacation next week. Even though it will be very short, it will be a lot of fun. We won’t be spending too much either, around $1,500 total with spending and food included.

I’m not sure if you all remember my post, He makes less money than me, so what?, but W officially makes more money than me right now. It is interesting to see him as the bread winner, especially since I have two bachelor degrees and my Finance MBA. It just proves that determination is key and can help you greatly with your income goals. The role reversal is interesting and I plan on doing a post on this soon.

Have any of you have experienced this role reversal? Who is the bread winner in your family? Tell me anything that somewhat relates to this and I’ll attempt to include you in this post.

The winners for my Aldi giveaway from my Weekly Roundup were announced and you can check the Rafflecopter widget to see who it was on that post. Congrats to Amber and Young Adult Money as the winners! It is nice to see people win who I know 🙂 Also, don’t forget my $75 Novica Giveaway. It ends in a couple of days and not many people have entered it yet, so the chance of you winning is pretty big!

There is also another giveaway today for an iPad 3, come back later today to my blog to check it out!

My spending this week was similar to my Life Update from last week. I don’t think I spent any money (at least none that I can think of) except for my OTHER dog this time. He is sick now, and it’s even worse. Since he is a French Bulldog runt, his nose is extremely closed (they have recommended laser nose surgery to open it up) and whenever he coughed he would go into a fit where he couldn’t breath for a little bit.

I took him to the vet immediately and he’s now on mediation also. Thankfully he is so tiny so the total vet bill with the checkup and medication included was only around $75.

Both dogs are thankfully getting better now. They were (about to be TMI posted) throwing up nonstop (they even threw up poop) and were super sick, so thankfully they are better. There’s only so much that a dog momma can take!

Extra Income (this is on top of my salary from my job):

This was a good week, but definitely not as good as weeks in the past. I have been told that December is usually exceedingly slow for any type of extra income because of the holidays though, so I am not too worried.

I made around $975 last week from my extra income efforts. I am still awaiting on a significant amount of payments, and next week’s extra income update will most likely reflect that.

I have cut down on a lot of my staff writing assignments and this is partially do to that. I am continuing with the remaining because I enjoy the blogs that I write on now.

We have been doing well with this. We went out to eat on Saturday and it was expensive, but that was only because W’s little brother and sister were at our house (we were babysitting. They are 9 and 12, big age gap in the family) and we all went to Applebees. It’s crazy how expensive food is when you have a family to feed!

I did make a meal plan this week, check out my Sunday Meal Plan.

I am still doing well with this. Haven’t done full workouts as much as I’d like, but I try and do something small in the mornings and a little more after work. Everything adds up right?

I am also buying healthy food items and cooking healthy meals more often as well. It’s all super tasty and I’m loving how well I am doing this this.

Last week I lost 0.5 pounds, but that is expected as I’m trying to build muscle and not really lose weight (only body fat). WOOHOO for me!