I recently had to start dealing with debt collectors because of an error with a company that we paid money to. 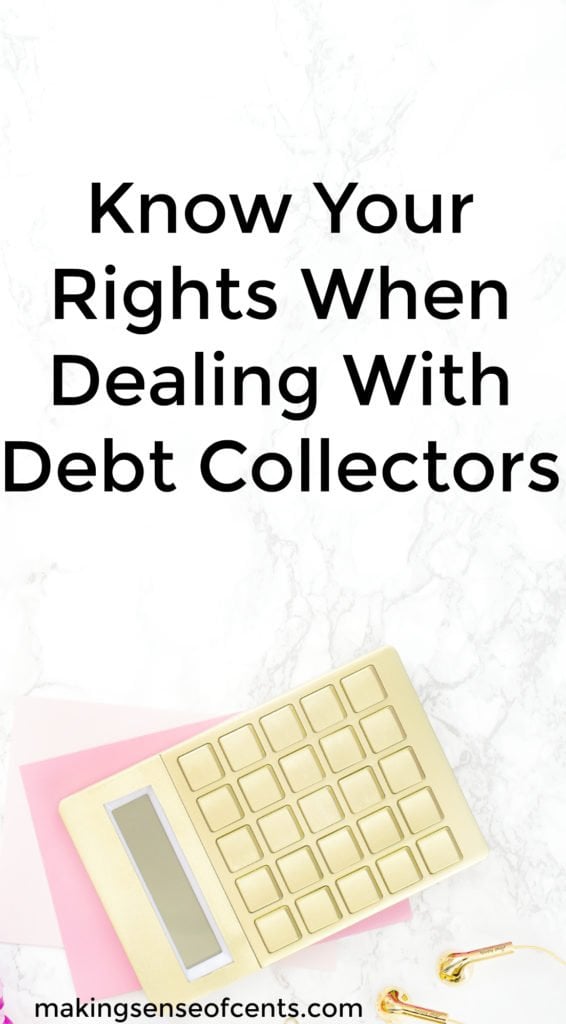 Let me tell you, it was a horrible experience.

The bill was for something I had paid a year previous to receiving the letter from the bill collector. Even though it was an error, I was able to learn a lot about the debt collecting process, especially because it was my first time dealing with a very aggressive debt collector.

Like I said, the bill was an error, but that didn’t mean the harassment stopped.

The bill collector didn’t want to believe me, and instead, they bullied me like crazy. They wouldn’t give me the phone number or any contact information for the company who had turned the bill into the debt collection agency, so I didn’t really know a ton of information about what it was for or anything like that.

After spending hours tracking down where the bill was from (that was a disaster in itself), it turned out the company that issued the bill simply forgot to mark it as paid.

But, that didn’t stop the bill collector.

I was told by the credit collection person that they would make sure my credit was wrecked unless I paid the bill, which I already had! They yelled, bullied, and harassed me, to the point where I was shaking because I was so furious that they could treat a person like this.

It was all a disaster, and the bill collector gave me a ton of incorrect information and was behaving very unethically.

I really don’t know how a person can sleep at night after acting so horribly.

Here are my tips for dealing with debt collectors.

Understand what debt collection is.

The first step in dealing with debt collectors is understanding more about debt collection and exactly how it works.

If you have a debt that is unpaid, such as 30 days or longer after the due date, the original company that you owe the debt to may sell your debt to a third-party debt collection agency. This allows the original company to still make some of their money, while no longer going through the process of trying to get you to pay your debt.

If you have a debt in collections, it is something that you should be concerned about. It is possible for the debt to be listed on your credit report, and it can hurt your credit score.

This may hurt your chances at getting a low interest rate on a mortgage, being approved for a credit card with a high cash back bonus, and so on.

Due to that, you should figure out what your next step will be when dealing with debt collectors, instead of just completely ignoring the bill collector. Sadly, many people just throw away the letter or ignore the phone calls, and that is exactly what you do NOT want to do.

Note: Do you know what your credit score is? You can check it for FREE with Credit Sesame!

Know your rights when dealing with debt collectors.

The Fair Debt Collection Practices Act is enforced by the Federal Trade Commission and it “prohibits debt collectors from using abusive, unfair, or deceptive practices to collect from you.”

The Fair Debt Collection Practices Act covers debts that you may have, such as from a credit card, a medical bill, a car loan, and so on. They only cover personal debts, not anything deemed as business-related debt.

Your rights under the Fair Debt Collection Practices Act state that a debt collector can only contact you at certain times, such as during normal daytime hours unless you agree upon different timing with the bill collector. Meaning, they can’t call you at 2 a.m. without your permission.

They also cannot contact you at work, unless you tell them that they can.

A bill collector can contact you in many different ways, such as by phone, a letter, email, or even a text message on your cell phone.

The bill collector does need to tell you certain things about your debt, such as:

If the debt in collection is actually yours, then you may want to negotiate. Most debt collectors are willing to negotiate the fee, so you may as well ask and try.

Debt collectors are known to harass people, which is actually not allowed. Also, they cannot harass any other parties they may try to contact when collecting your debt.

I’ve heard stories of debt collectors calling people hundreds of times a week, harassing their friends at work, showing up at a person’s work, and so on. However, that is not allowed and is prohibited. And, this is why you should know your rights when dealing with debt collectors – because you do have rights, even if you owe the debt!

A bill collector is allowed, in some instances, to contact other people about your debt, but only if they are trying to figure out where you live, your phone number, or where you work.

They cannot, however, contact people you know more than once. I’ve heard of debt collectors contacting someone’s friend or extended family member at work repeatedly and annoying that person, and that is not allowed.

What to do if it’s an error.

Before you pay or negotiate a debt that is in collection, you should be 100% sure that it is actually your debt to pay. In some cases, it may be debt from someone that has a similar name to you, it may be debt that you’ve already paid, and so on.

Like I stated above, I was contacted and it was an error.

However, that didn’t mean the harassment stopped.

Instead, I was told by the credit collection person that they would make sure my credit was wrecked unless I paid it. They even yelled, bullied, and harassed me.

According to the FTC:

For me, I had to contact the original company and have them contact the debt collector. It was a process that took pretty much a whole work day of me being on the phone, and I was close to just paying the bill because it took so much energy and effort to get the collector to stop.

However, after the bill collector started harassing me and giving me incorrect information, I didn’t want that person to win, so I made it my mission to prove them wrong.

And, they were wrong.

I’m still waiting on the apology (haha!) but, at least, I don’t have to pay the bill twice.

Because errors can happen when paying bills, it is important to keep records of your bills, when, and how you pay them. If you can look back at your records, it can help you streamline this process should it ever happen.

Have you ever had to deal with debt collectors? What other tips do you have?