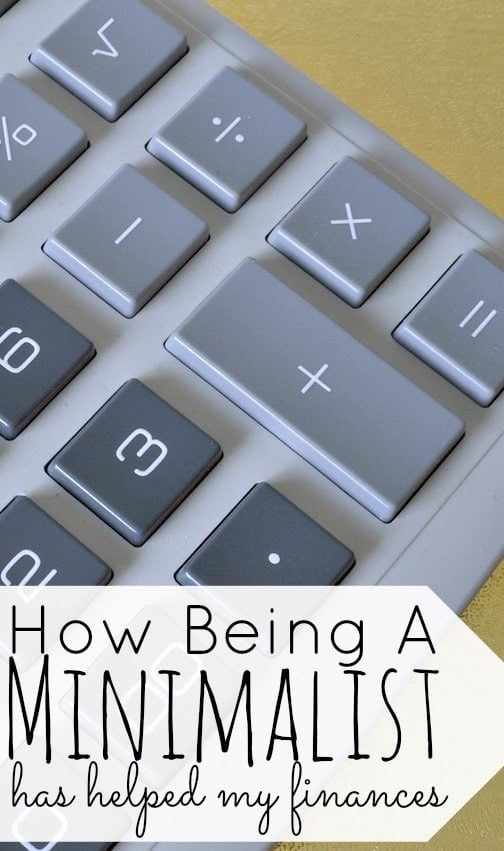 I didn’t always have minimalist tendencies. Though I never considered myself a collector, I did have a ton of clothing and furniture while in University, and the size of my book collection growing up bordered on the absurd side. Becoming a minimalist wasn’t on my mind before.

For the last few years though, accumulating large volumes of stuff wasn’t really on my agenda anymore, it just didn’t hold the same appeal that it used to.

I didn’t know my new found feelings were called minimalism until I started trying to get out of debt, I realized what a great advantage my natural habits were, and how much they could help me if I was willing to hone them a little.

Minimalism Helps Me Stay On Budget

When I first started trying to get out of debt, I knew that I needed to cut my expenses and develop a budget. I also knew I needed to get a handle on my shopping habit.

Even though I was no longer into collecting many material possessions, I still had the bad habit of purchasing dumb stuff like magazines and candy, which, when added up at the end of the month, represented a huge waste of valuable cash that could go towards paying off my $38,000 debt load.

So I set a budget, and challenged myself to cut out all of the waste that I’d been paying good money for.

The effect was amazing. Over the past 17 months I’ve given up almost all of those silly little money wasting habits I used to have, and not partaking in them has cleared my mind and my home. I used to get so frustrated with all of the stuff I’d end up dragging into the house. Receipts, wrappers, magazines, flyers and the like were the bane of my existence.

Now, that stuff never makes it into the house, because I never buy it in the first place. This has freed up a ton of cash in my budget, that I’ve put towards paying off my debt.

Minimalism Helps Me Increase My Income

Once I’d realized how much I love simplifying my life, I started looking around at all of the other stuff in my life that could be simplified. I had a lot of furniture that, after moving from the city, no longer had a place in my new, 400 sq. ft. digs.

So I sold it. Not only did I make a little extra cash on furniture that I wasn’t even using, I cleared out a lot of storage space.

Minimalism Helps Me Get out of Debt

By decreasing my spending and selling off extra possessions I had no use for, I suddenly had more excess cash available. So, naturally, putting that excess cash flow towards debt was the logical thing to do. My living expenses now are lower than I ever thought they could be. Instead of spending all of my income on clothing or furniture or a large expensive rental, I spend it on debt.

Now, if I really want a book, I’ll still buy it, but I’ll get the eBook version, and I’ll appreciate it that much more because it’ll be the only thing I buy this month.

The funny thing is, even though I’ve drastically changed my consumption habits, I’m still just as happy or even happier than I was before. Having healthier finances has made a world of difference in my peace of mind, as has stepping of the consumer hamster wheel.

Have you ever reduced your consumption to help your finances?

This was another awesome post by my wonderful staff writer Jordann. Hope you enjoyed it!