I like to think of myself as a minimalist. I don’t typically keep things that aren’t useful to me, and I don’t need much to get by. I’ve never been the kind of girl that buys 18 million different kinds of lotion or has an overflowing make up bag, and even though I have more clothes that I need, I always come back to the same 7-10 outfits every time.

That said, I was always really bad with clutter. The top of my dresser, my desk, my kitchen table, and yes, my bedside table, always held mounds of clutter.

Magazines, receipts, DVDs, change, pens, notepads, flyers, makeup…just stuff. It got so bad in my last apartment that once when I pulled the top drawer of my dresser open, a bunch of stuff slid of the pile on top and fell into the drawer.

I guess I should blame it on my laziness. Nothing I ever did seemed to make a difference. What’s the point of cleaning it up when just a week later everything is right back where it used to be?

I realize now that if I want to be organized, it can’t just be a sporadic, once a month cleaning binge. It has to be every day, for five minutes, eliminating stuff. My bedside table used to be a dumping ground for everything that didn’t have a home. The worst part was, my beside table doesn’t even have drawers, so all of that crap was out in the open for everyone to see. END_OF_DOCUMENT_TOKEN_TO_BE_REPLACED 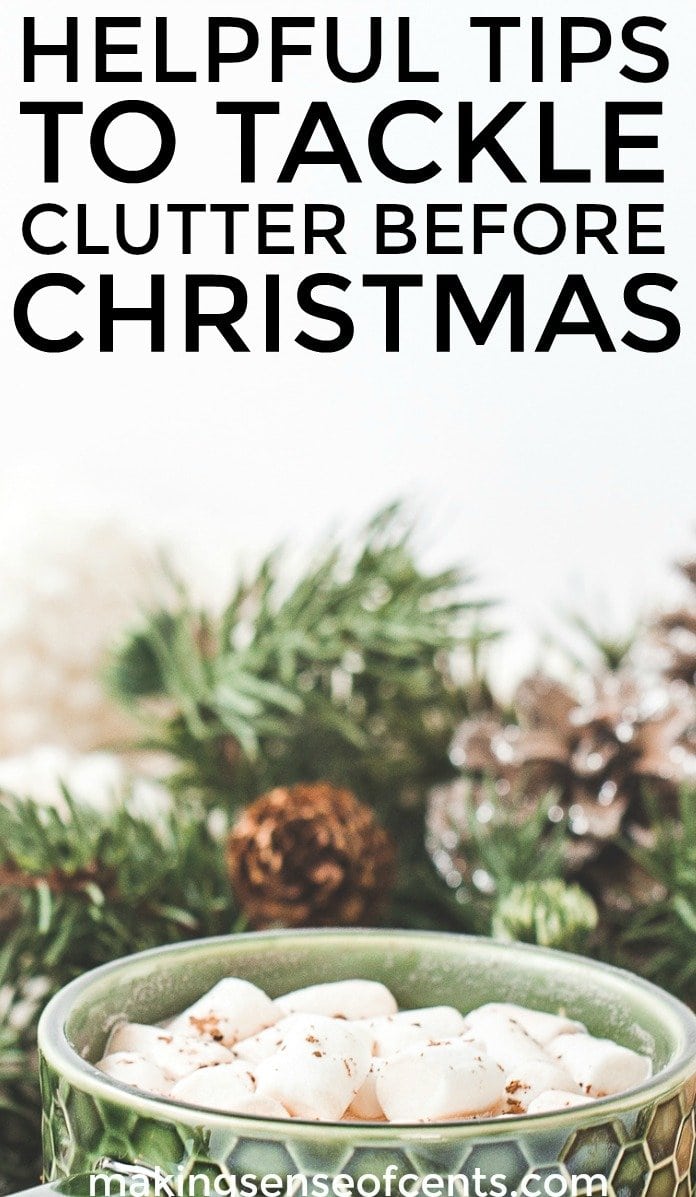 Christmas is fast approaching and with it, the promise of more stuff. More presents, more decorations, more hostess gifts, more of everything!

With the weather starting to turn sour in many parts of North America, there’s no time like the present to get ahead of my clutter before the holiday season jams my 400 sq. ft. house with stuff.

Have No Space, Will Declutter

I’m probably more motivated than most to declutter. I live in a 400 sq. ft. house with about two small closets and a wall of shelving in the laundry room. I have no kitchen cupboards to speak of and a single book case. Needless to say, space is at a premium at my place.

Which means, now that I’m inside more and spending less time taking care of the yard, I’m going to tackle a few areas of my house that have been getting out of hand. It’s always slightly scary taking on organizational projects.

I’m not sure about you, but I have the nasty tendency to start cleaning one area of my house, say, the closet. Half-way through that little project I move some things to the book case and think “While I’m here…” and begin to organize that.

Before I know it I’m sitting on the floor surrounded by a sea of stuff I’ve dragged out.  It’s 10 o’clock, I’ve finished off the better part of a bottle of wine and I’m starting to think about how comfy my bed is….I convince myself I’ll finish it tomorrow, and walk around that pile for a week, before I shove the entire thing under my bed.

This has been my plan of attack for about the past five years or so and it’s only recently that I’ve actually began to develop some real skills in the decluttering arena. Here are a few tips that I’ve picked up recently, that’ve helped me stay (moderately) organized.

While it may be tempting to get up one morning and say “I’m going to organize the ENTIRE garage today!”, if you aren’t an organizational pro with oodles of insatiable motivation, that could be a recipe for an even more disorganized and dysfunctional garage.

Start With the Old Stuff

It’s easiest for me to declutter when I tackle the boxes I haven’t opened in years.

Besides it being a fun little trip down memory lane, I can start the whole project out with the mindset of “I don’t need anything in any of these boxes, because I haven’t touched them in years”. Deciding what I actually need and what I don’t can be tough sometimes, so going into a project knowing that’s not even a factor in my decision making process makes the whole thing easier.

This last tip I actually picked up from the Everyday Minimalist, and it’s helped me and some friends of mine countless times. There are some cases when I’m decluttering, that I’ll come across something that is broken, or that I’ll never actually, realistically use again.

This item might be a broken necklace that I received as a gift many years ago, a childhood book that’s near to my heart, something along those lines. In those situations, I want the memory of the item, without a physical thing to take up premium space in my house.

In those situations, I’ll set the item next to a window where I have good light, and take several pictures of it from every angle. Since it’s really the idea of the item I’m attached to, those pictures will immortalize it for me enough, the physical item is no longer necessary. After that, I’m free to toss the item or donate it, without worrying that I’ll forget that it ever existed.

I’ve been using that method of getting rid of stuff for about the past year, with great results. I’ve ditched childhood toys, drawings, essays, report cards, and jewellery that my fiancé gave me nine years ago when we first met. You name it, I’ve ditched it without every worrying that I’ll forget about it. I keep a folder on my computer for the memories, and I back it up through flickr.

So take advantage of this relative lull before the crazy rush of Christmas, get your financial and actual house in order by organizing and decluttering.

But don’t forget! Just because you have all of this new found space, doesn’t mean that’s a license to fill it back up with stuff!

Do you need to declutter? What’s your goal?