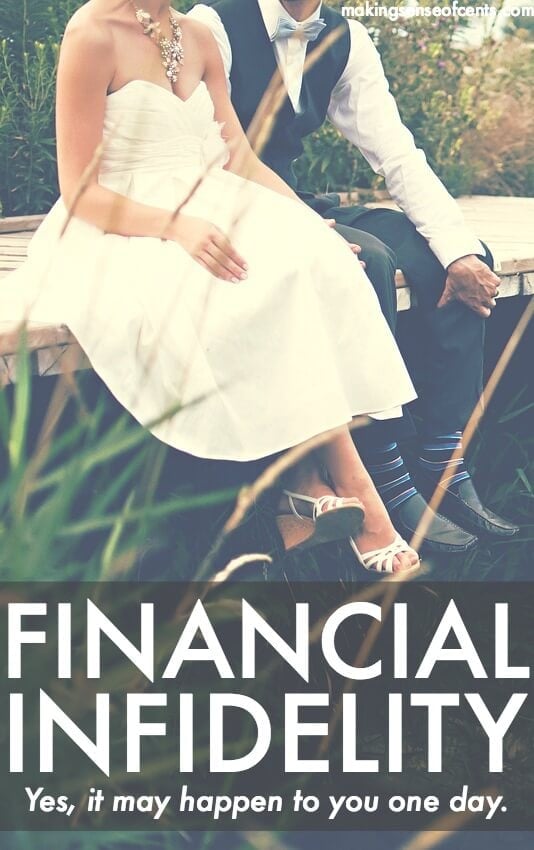 Infidelity of any kind is something no one wants to think about happening. While some may think financial infidelity isn’t that big of a deal or that it would never happen to them, think again!

According to an article on Forbes, 20% of those in the U.S. keep financial secrets and 7% between the ages of 18-49 have a secret bank account or a secret credit card they keep from their partner.

Also, according to a survey taken by the National Endowment for Financial Education, 31% of survey takers admitted lying to their spouses about their finances. These aren’t just little lies either, most of the 31% stated that if their spouse found out about their lie that a divorce may be on the horizon.

Whether it’s secret credit card debt, a large secret purchase (such as a house or car even!), or something else, some relationships do experience these problems. I have heard of some finding out that their spouses had hundreds of thousands of dollars worth of debt they didn’t know about, a second house they kept without the spouse knowing, and so on.

The problem with financial infidelity is that it can lead to even bigger financial problems (debt piling up beyond what’s imaginable), stress, unhappiness, it may start impacting other areas in a person’s life (such as work), and it may even lead to divorce.

Recognize the signs of financial infidelity.

There may be a chance you are already a victim of financial infidelity.

Some of the signs include:

The case for secret accounts?

I’ve heard of many saying they have secret financial accounts because they know their spouse will spend all of the money they have unless some money is kept secret from them. Their spouse may have a gambling addiction, a spending problem, a drug problem, or something else plaguing their life.

While this may sound like a good step to take so that you and your spouse can save more money, it most likely is not. It’s a much better idea to solve financial problems in your relationship than to come up with temporary solutions that may just lead to a bigger disaster.

Finding help for your spouse (such as finding a therapist, support group, etc.) instead of keeping a secret from them is a step that may help you more in the end.

Be open about money.

Regularly communicating about money is an important step for every relationship. Being open about your money situation can help prevent any surprises, it will ensure that both people in a relationship are aware of what’s going on, and so on.

You and your partner should sit down every so often such as once a week, once a month, or whatever timeframe works best for the two of you.

In these money meetings, you should discuss:

The key here is that both of you are up-to-date on what is going on so that everyone can work towards the family’s financial goals together.

Others only tell their spouse if they reach a certain amount, such as $100.

Whatever you decide, it’s a good idea to sit down with your spouse so that you can determine what the best amount for your situation is.

Doing this can help keep the communication lines open in your relationship so there are fewer arguments about money.

Do you think there are situations in which committing financial infidelity may be the better idea? What would you do if you found out your spouse had secret debt or another financial secret?