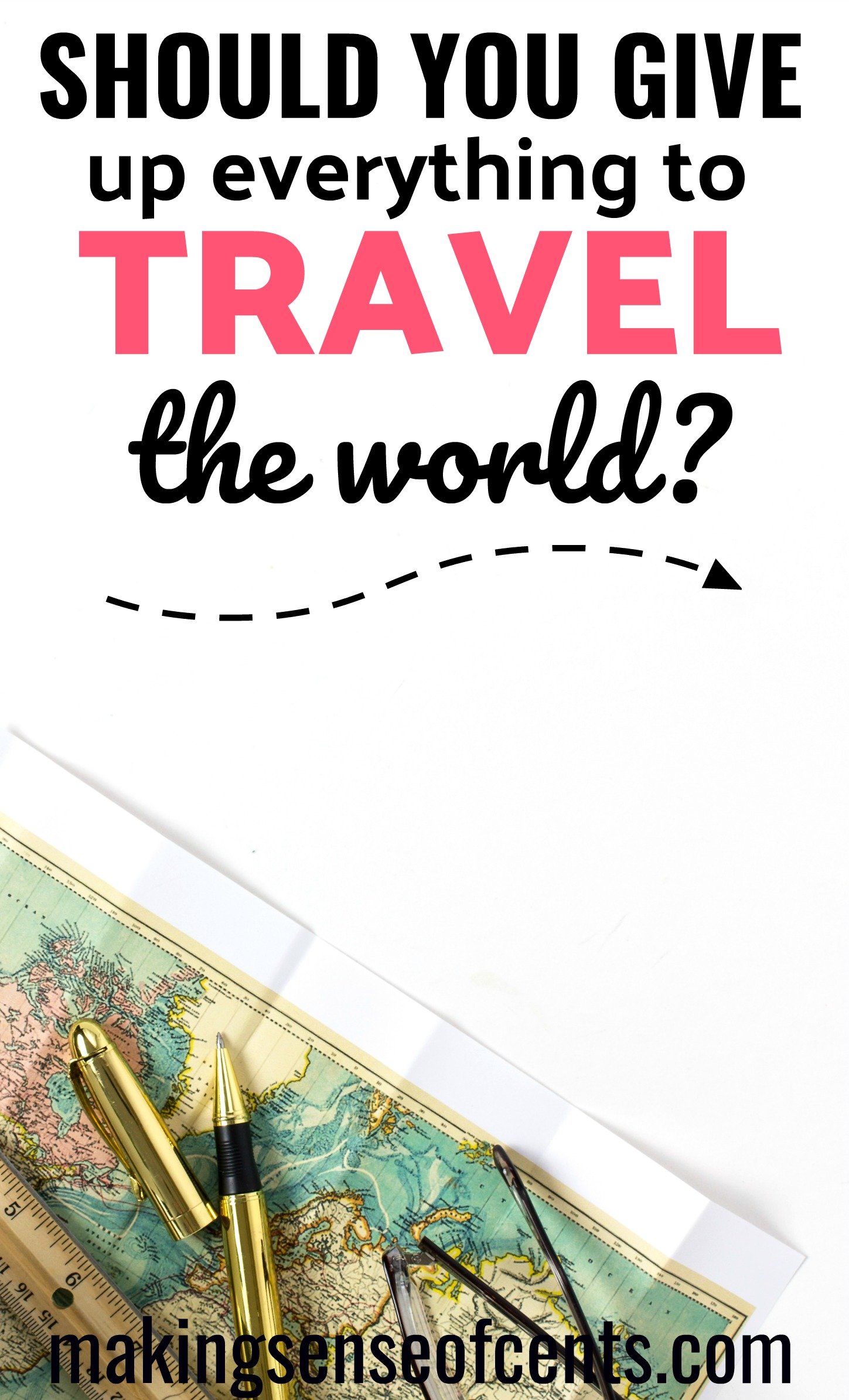 Hello! Here is a post from a blog friend of mine. I always love reading posts about how to travel the world, so I knew I had to say yes to her post idea. Enjoy!

The quick answer to title of this post is: YES! At least that is what some people would say.

But just think about it for a second: If you had the opportunity to travel the world for a longer period of time, wouldn’t you go for it as well?

Every day when I go on Facebook, I see people talking about how their careers are really talking off, they graduated with this and that degree, they just got a mortgage for their house, what they had for dinner and so on.

And the feeling I get whenever I read all of the above, is the feeling of being unable to breathe. Well, sort of at least.

Why do I get that feeling? Because it is so far from what I want with my life and from who I am as a person.

Now is there anything wrong with a house, a car, three kids and a dog? No, not at all. It’s just not what is written in my cards. At least not at the moment.

I have the word “wanderlust” stuck in my brain. And it doesn’t seem to go away. And when I decided that I could no longer ignore it, I took the first step and I bought a flight ticket so that I could travel the world.

But by doing all of this, I am going to have to say goodbye to a pretty good life in England. What am I actually going to give up?

I always read about how other people were sick of their 9-5 jobs in a cubicle, so they handed in their notice but stormed out of there early anyway because they just couldn’t take it any more.

It’s not like that for me at all. I’m actually really sad about leaving my job.

I have worked as a nanny for the past two years, looking after some (most of the time) amazing kids).

My income has increased significantly over the past year due to being offered more work and I got a pay rise not long ago.

I am finally in a good place financially, but I am waving goodbye to that for a life of travel.

That is something that has been very important to me for a long time, but I am slowly starting to break away from it.

I have lived in my flat for over two years and as much as I love it, I can’t wait to stop paying sky high rent. Of course it can be slightly difficult to say goodbye to a place you have spent so much time in and where you have created so many memories.

A stable income is another thing I’m giving up, which is actually kind of scary. I will probably miss that the most.

I have always been really bad with money. Like terribly bad! I never had two pennies to rub together as I wasted my money on things I didn’t need and nights out that were’t even that great.

It’s only in the past year that I have started to gain control of my finances and it is something I’m extremely proud of.

I’m hitting the road with a good amount of savings. I have eaten a lot of spaghetti in the past year and had a lot of nights in instead of going out, to be able to save enough money. However, I know it will all be worth it in the end when I travel the world.

Related article: Pursuing What I Love or What Brings in the (Stable) Money

I once had a friend who said he couldn’t possibly travel the world because he had just bought a new, expensive sofa…

Lucky for me, my sofa is sort of rubbish and broken so that won’t be a problem for me!

I began to sell all of my belongings in at the beginning of 2015. And to be truthful, the first couple of sales were hard even though the things I sold weren’t particular important to me or had any sentimental value.

It was just the whole idea of letting go of all the things I had been “collecting” over the years. However, after that first couple of sales it became much easier. If you want to learn how to travel the world, you will have to be more minimalist when it comes to your belongings.

I’m now actually enjoying selling my things. It gives me a great feeling when I put that money in my travel fund. And I really doubt I’m going to miss all of these things when I’m on a paradise beach in Thailand…

Now I am in no way encouraging people to drop out of college or university. Stay in school, kids!

I have done my first year and a half of University. And it was great! I loved it. I have wanted to study psychology for as long as I can remember, and when I got accepted onto the course I was ecstatic.

I do want to finish my degree eventually, but right now it’s the road that is calling me and life is too short.

Shortly after I began to plan my trip around the world over year ago, I met a man. It was one of those kind of loves where you forget about the reality you are surrounded by, because you are so in love. The idea of traveling was pushed in the background, because it was no longer as important to me. It was no longer my priority.

I did eventually have a bit of a wake-up call. You know, one of those moments where you just stop and think: “What are you doing? You are giving up on everything you have worked so hard for and dreamed of for so long, just because of a man.”

I had to face reality. I wasn’t about to give up on what I wanted the most in the world.

It was hard in the beginning after having realized this, but it was the best decision I could have made.

Dating other people after that hasn’t been easy and I have completely given up on it now. The minute I mention “full time nomad” to a man, they run away.

But at the end of the day that’s for the best. I don’t even blame them.

So yeah, I may be crazy according to some people for giving up on all of those things. I am in a better place than I have been for a very long time, but my personal belief is that when you get too comfortable in one place, it’s time to get up and move on. And as I once heard: “When you’re stuck in a place for too long, it’s best to throw a grenade where you stand and jump.”

Author bio: Zascha is the blogger behind accordingtozascha.com where she writes about her expat life in England and her love for Denmark, while she is preparing for a trip as a budget backpacker around the world which will start soon.

What would you do so that you could travel more? Are you interested in learning how to travel the world? What’s the next trip you have planned?