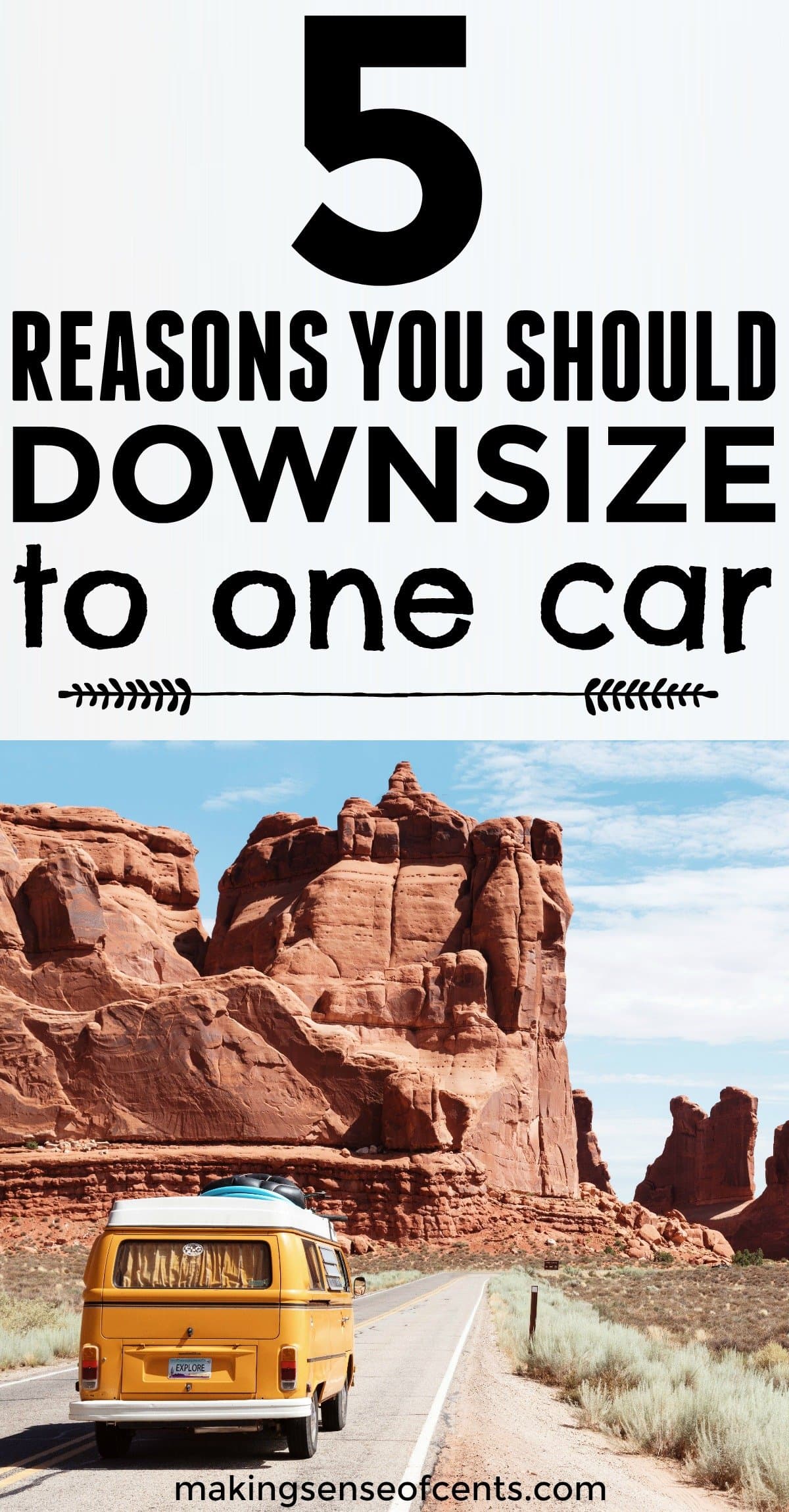 We currently have two cars, but have been seriously thinking about sharing a car and downsizing to just one. I hardly ever drive, and I can count the amount of times I have driven in 2015 on one hand.

Due to this, we have been thinking about selling one of our cars and becoming a one car family.

There are many reasons for why we are thinking about sharing a car, and it’s not just all about money.

Yes, the money is just being wasted on the second car since we most likely do not need it, but it’s also a waste of time and space. I am always trying to save time in my life by eliminating time wasters, so it makes sense that the next thing we are currently evaluating is our car habit.

Below are some of the reasons for why we are and are not thinking about becoming a one car family. Some of the below can probably be adapted to fit your situation as well if you are thinking about sharing a car.

We both work from home and sharing a car wouldn’t be hard.

As you all know, both of us work from home and hardly ever have to leave.

99.99% of our work can be completed with just a laptop and wifi, so having to leave our house in order to get something done rarely happens.

This means that our cars are mainly used for pleasure and convenience. We use them mainly for getting groceries and traveling. Other than that, we don’t really ever use our cars.

We hardly ever have a reason for why both of our cars would have to be used at the same time since we don’t have to drive to work.

This is a big reason for why sharing a car and becoming a one car family would be very possible for us.

We would save money by downsizing and becoming a one car family.

Cars are expensive and everyone knows that. Between paying for the actual car, maintenance, registration fees, and more, it can easily add up each month.

We would be getting rid of the Subaru if we did decide to get rid of a car. While I love the car and the better fuel mileage, it is low clearance and it would be near impossible for us to do many of the outdoorsy things that we want to do because it wouldn’t make it on the rocky backroads.

We do have a car payment on our Subaru (we received a very low interest rate on it and that is why we didn’t pay for it in cash – we found better use for our cash instead). If we eliminated the Subaru, I believe we would be saving somewhere around $425 a month since we would be able to eliminate the monthly payment, maintenance costs, high personal property taxes, registration fees, and the cost for car insurance.

Of course, downsizing to just our Jeep Wrangler would mean more money spent on gas, but I don’t think it would make too much of a difference since we wouldn’t be able to drive the Subaru to many of the places that we want to go to anyways.

One of our cars is always just sitting there.

As I said earlier, one of our cars is usually just sitting there for days or even weeks at a time without being used. This is a complete waste of space and money, and is a big reason for why we are thinking about getting rid of one of our cars.

It just feels stupid to have one car sitting there all the time. As I am typing this, we haven’t even driven the Subaru since the day we moved into our new house and parked it in the garage.

That was on February 21st.

Obviously due to this, sharing a car and becoming a one car family wouldn’t be too difficult since we never seem to use the car anyways.

Downsizing to one car would make life more simple.

Two things I dislike doing every year is having to deal with personal property taxes and car registration. I haven’t really researched how everything is done in Colorado, but Missouri makes the process very tedious by requiring emissions testing, safety checks, large personal property tax payments, and more each year. Downsizing to one car would mean I only have to do this once each year, instead of twice.

We also wouldn’t have to worry about maintenance on two cars by simplifying.

Lastly, becoming a one car family would make moving more simple as well. Since we still want to move possibly a few more times before we decide on our “forever town,” having just one car would make each move more simple.

The negatives of sharing a car and becoming a one car family.

The main negative I can think of when it comes to becoming a one car family is that occasionally both of us will need a car. This won’t happen too much really, but this summer Wes has some travel plans which means that around once or twice a week he will need the car for a day or two. It’s just a day or two, so I think I could manage.

If I did need a break from our house, the “city” part of our small town that is filled with breweries, coffee shops, a grocery store, and other stores is just a short bike ride away (less than one mile). Everything is just right down the exact street we live on, so I know it wouldn’t be too hard to get something or to go somewhere.

Also, if both of us absolutely need a car one day, we could just rent one for cheap. I often see them going for around $15 to $20 a day, which is much better than $425 a month.

Other possible negatives of becoming a one car family include that the Jeep doesn’t really have enough space for all of us (two humans, two dogs, and all of our stuff  – Wranglers are not exactly spacious) whenever we go on a road trip, the Subaru is safer and drives better than the Jeep, the Subaru gets better gas mileage, and we don’t owe much on it.

In the end, I really don’t know what we will decide. While the reasons above in this post make it pretty clear that we should just get rid of the second car, it still seems hard to do. We are so used to having two cars and the luxury/ease that comes with it. While this may make me sound snobby, I am sure others feel the same way.

How many cars do you have? How much do you spend on car expenses each month? Have you thought about sharing a car and becoming a one car family?