Recently, I was nominated by Lauren at LBee and The Money Tree and Catherine at Plunged in Debt for the Versatile Blogger Award. You’re supposed to share seven things about yourself that your readers may not know about, so I thought it would be fun to do.

It was a little hard to think about things that I haven’t shared on the blog yet since I am so open here. However, I thought of some little tidbits about myself that will probably make you laugh at me. Enjoy!

1. I’m half South Korean and half European.

This is a question I am asked often, so I thought I would start out with it. I have been stopped by numerous strangers throughout the years and usually no one guesses correctly.

Usually the next question is about how “Korean” I am. I don’t speak a word of Korean. I also do not like sushi unless it is a California roll or some non-raw fish version of it. However, I do love all of my food to be extremely spicy, so I guess that’s one Korean habit I have.

I have been told by several people that I am a great person to have over for dinner because I will literally eat everything in sight and make them feel good about their cooking skills.

Not sure if that’s a compliment, but I do like to eat. My friends often joke about how I should enter eating contests…

I’ve always been a big eater. I love food and I am not a picky eater at all. I eat more food than pretty much everyone else I know. Wes often jokes about how he wishes he had my appetite.

It’s bad for the wallet though!

I don’t talk about my dad and his passing a lot of my blog, but I think talking about him more is something that will help me heal. Before, I would just completely not to to think about anything, because of how upset it would make me.

I was a HUGE daddy’s girl. I grew up mainly with my dad (my parent’s were divorced), and we did everything together. I am so happy that he took pictures of everything because I now have around 100 photo albums to look through and remember him with. 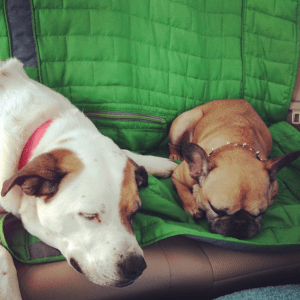 4. I’m actually even MORE crazy about my dog’s than I let on.

I’m sure most of you know that I’m a crazy dog person. However, I’m much more crazy than I show on this blog. I adore my dogs to the point where others are probably embarrassed for me.

I don’t care though. They are awesome!

I have been stopped by strangers at the store, walking outside, and in other places because of my face. Yes, I guess I must look awfully angry if strangers stop me to tell me “Nothing can possibly be so depressing in your life that you have to have that face.”

This is just the way I look!

And honestly, it’s a little rude to tell people the things I’ve been told about my face.

Even though we have been traveling a good amount since switching to self-employment, I am actually a major homebody. I like to have a home base and spend time in my own bed and on my own couch.

7. I’m the clumsiest person on earth.

I seem to fall all the time. I will also bump into things, drop things, and occasionally break items as well. It’s sad, and it’s so bad that it’s become a joke with me and Wes now.

This one makes me especially laugh because I just bought a membership at a rock climbing gym. Even though I have a harness and a rope, I am still afraid that I will mess something up and hurt myself. I am just so clumsy and forgetful. I am afraid I will forget to clip myself in one day!

Now, I nominate everyone who hasn’t done it yet. I feel like everyone’s already done one of these or they have been nominated. If you haven’t done one yet, I think you should do it now. It was fun!

Anything on my list surprise you? Do we have anything in common?