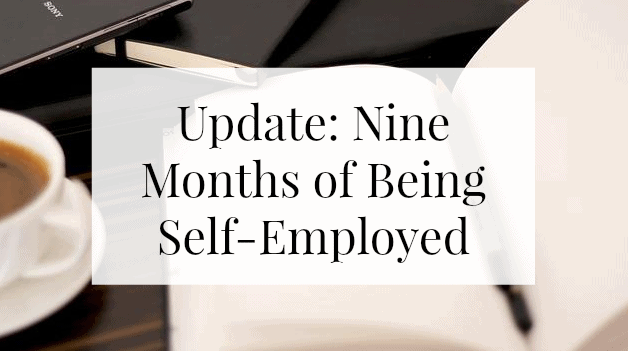 My last day at my day job was in the beginning of October of 2013.

That means it’s been around 9 months since I left my day job to pursue full-time freelancing.

I still remember when I first told my employer that I was leaving. I was dreading the day. I was extremely nervous about what my bosses would say (in my head I was a complete wreck), and I kept saying to myself “Six months from now all of this will be long forgotten.”

Now, it’s been nine months and I haven’t looked back once. I still have no regrets and I am EXTREMELY happy with the decision I made.

Self-employment is still going very well. I am enjoying each and every single day. I enjoy waking up, working, having a flexible schedule, and everything else that has been going on.

Below is my update after being self-employed for nine months.

Not having a commute is still wonderful.

I don’t see this ever changing. Yes, I like car rides but I don’t like them when the end goal is to take me to a boring and stressful job.

Being able to just wake up and get straight to work is a great thing. Yes, this usually means that I stay in my pajamas for a good portion of the morning (hmmm maybe into the afternoons), but it’s nice to be able to complete so much work in the early mornings.

I’m still getting in more “socialization” even though I work from home.

When I decided to make the switch to working from home, many people seemed worried that I would be bored and lonely.

The truth has actually been the exact opposite.

When I had my day job, there was no talking whatsoever. It was extremely boring and not having a single office friend (I worked independently in a field filled with men who were 45 and older) got old really quick.

Now, I can see my friends and family during the day when they are off from work (I have too many nurse friends). I also talk to other bloggers and readers pretty much all day long as well.

The thought of unstable income.

The unstable income is something that still gets me every now and then. There are weeks where I will make hardly no money, and, of course, times like those can make a person nervous.

As a freelancer, I’m sure these slow weeks make most nervous because it almost feels like everything has dropped off the face of the earth.

Traveling and being location independent.

One big positive of self-employment for me is the fact that all I need in order to work is a laptop and an internet connection. This means that I can pretty much work from wherever I want.

I have been traveling a lot so far this summer (one week in Vegas, 2 weeks in Colorado, one week in the Caribbean), and I worked nearly the whole time as well. I just scheduled as much as I could ahead of time, and then I brought my laptop to complete tasks along the way as well.

I would like to become more location independent then this though. We have been thinking about taking a long hiking/camping trip where we would drop off our car someplace and hike on some amazing trail that is thousands of miles long (okay, maybe just hundreds of miles to start off with).

I’m just not sure how that would work though as I, of course, still need to work.

Any ideas? Or is this completely hopeless? Haha a girl can dream right?

When I publicly announced that I was making the switch, I had many people tell me that I would grow to hate freelancing. That has not been the case at all.

I still love freelancing, and I enjoy it more and more every day. It’s great to actually be my own boss. I love how everything I do affects my business and that I am actually growing a business of my own.

What else do you want to know about my nine months of being self-employed? How is self-employment treating you?