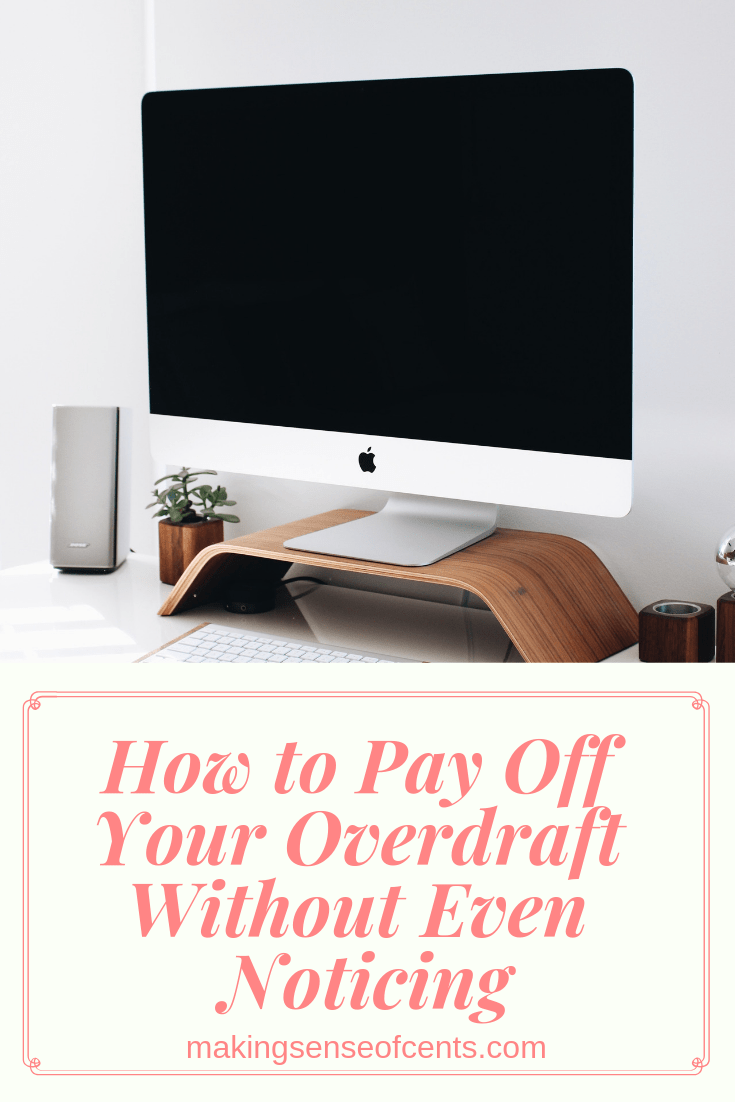 Hello! Today, I have an article written by a blog friend. Enjoy!

Not so long ago, I used to watch miserably as my hard earned monthly salary got sucked into my overdraft at the start of the month, leaving me with a credit balance of not much over zero.

I was a slave to my overdraft, having fallen into the habit of overspending every month until I had reached my overdraft limit of $3000 right before payday (sometimes I ended up over the limit too).

It was so depressing!

I made a good income, but my debts were out of control through spending carelessly and not paying enough attention to what was going on in relation to my bank account. In addition to the overdraft, I had all sorts of other debts too which were out of control.

I was a bit of a financial mess to say the least. But I did actually manage to pay off my overdraft right before I got serious about the other debts I had. And I paid my overdraft off in such a way that I barely even noticed.

I was actually quite surprised when I checked my overdraft one day (I didn’t check my bank all that often back then) to find that I’d reduced it by 50% without really trying all that hard. I was soon to realize that this was the first step I’d successfully made in my long and often challenging journey to get out of debt.

For me, having an overdraft that was maxed out bothered me even more than the debt I had accumulated through credit cards and loans. I just felt like I was working really hard at my job every day and then when I got paid, I didn’t actually see any of it because I owed my monthly wages to the bank instead!

Once I’d cleared my overdraft, I felt more in control of my finances almost instantly. I was able to see where my money was going and felt in a better position to tackle my other debts.

Here’s how I paid off my overdraft without really noticing

I set myself a challenge of cutting down my spending by $100 per month.

I achieved this through doing really tiny things like catching the bus home from a night out rather than getting a cab and I swapped clothes occasionally with my friends instead of buying something new. I was a spendy person back then and thought nothing of a new outfit two or three times per month and a luxury gym membership to boot.

I made a few more changes like having a girls’ night in on a Friday night rather than going out. It was nice to catch up with my friends and save money at the same time by having a movie night with wine and popcorn rather than an expensive night out. I also stopped buying lunches at work and took my own salads or sandwiches to work instead.

I began to save even more than I’d originally planned and I found that making small changes was no hardship really, it just involved being organised and thinking ahead.

I still had cable TV and for some reason, I still kept the gym membership – maybe that was my inner voice whispering to me (quite wrongly I should add) to keep up appearances – but the point is that I managed to save money just by making those small changes. By saving money each month like this, my overdraft started to decrease automatically.

When I realized that I’d managed to regain some control over my overdraft and I’d had chance to relish the fact that I was actually in the black rather than the red (until the middle of each month at least), I decided to call my bank to get them to reduce my overdraft.

When I called my bank to ask them to do just that, they asked me a series of questions to find out “if I was sure” and “wouldn’t the original overdraft be better to keep hold of just in case” as I might not be guaranteed an extension again.

I was a bit surprised because I had to actually convince my bank that this was what I wanted! I still get emails and calls from them even now offering to extend my overdraft because they obviously want to make a bit more money from me.

After I paid off my overdraft, I started to tackle the main bulk of my debt which meant giving up a whole lot more, but I’m fine with that – it definitely needed to happen that way for me.

If you want to cut down your overdraft without giving up everything, you could try:

Have you ever been in trouble with your overdraft before?

Author Bio: Hayley is a freelance writer who currently blogs about debt and money matters over at her website Disease Called Debt. There you’ll find Debt Success Stories, debt help resources and money saving tips. You can also follow Hayley on Twitter.

The image above can be found here.