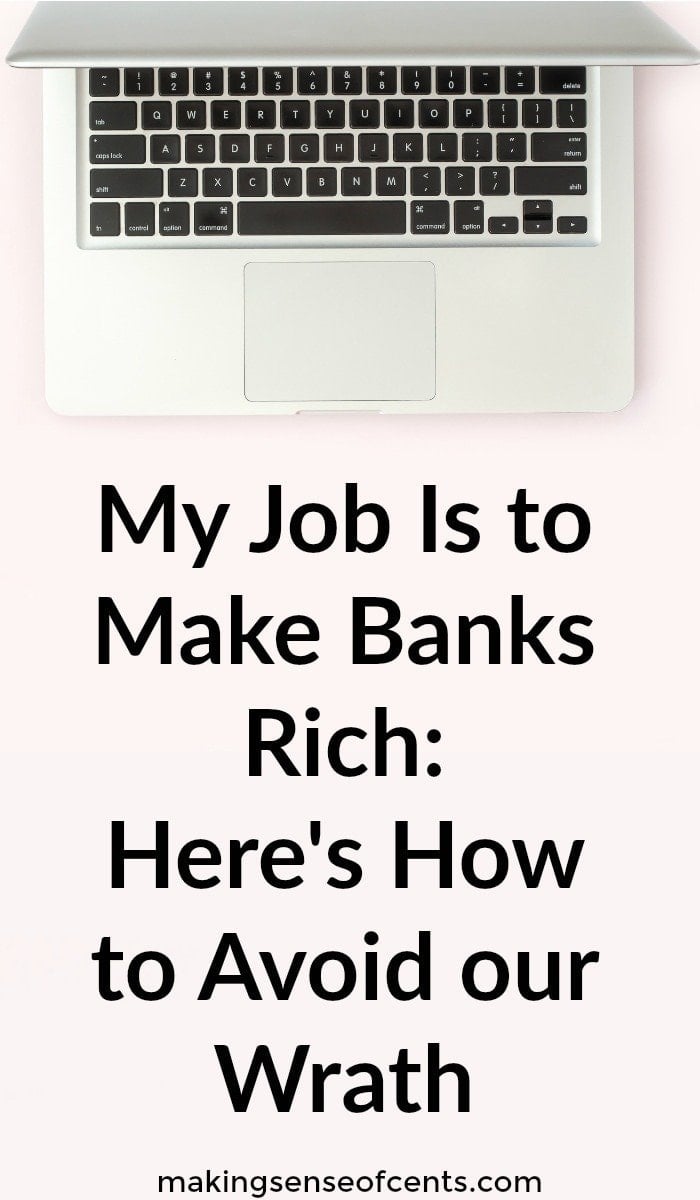 Hello! The other day Will Lipovsky from First Quarter Finance, a blogger friend of mine, approached me with a possible article for my website. The topic is something that is not discussed often, and I knew I wanted to have him contribute to my blog. Enjoy!

That’s just one of the many things I’ve learned by working with hundreds of banks across North America.

I work with bank presidents, CFO’s, CIO’s, and loan officers daily to help them make money off you. Since I know how to make banks money, I also know how to save you money. I will tell you how to avoid our wrath.

For your information and entertainment, I’ve made a list of 5 wild facts I’ve learned about the banking industry:

If you (or someone you know) is even halfway important, use it to your advantage!

I know a woman from San Diego who overdrafts multiple times a month. Those Coach purses aren’t going to buy themselves after all. But she has no reason to worry. This isn’t a problem for her since her bank happily waives the fee every single time. It’s because her daddy is a successful businessman in town.

The bank is afraid if they don’t waive the fees, she’ll run home and tell daddy that his bank is being mean to her.

Last summer I went to a bank in Chicago to advise them. They were waiving tons of fees for one wealthy client. This guy owned planes, cars, houses, and businesses all over town. His planes were always flying to Mexico and back multiple times a month. I’m fairly certain he’s a drug dealer.

But anyway, after some investigation, all the business he was giving the bank was actually losing them money. See, sometimes bankers want you so bad; they don’t pay attention to the real numbers. They believe you’re important and assume you will make them money.

One loan officer started screaming once I revealed the real numbers:

“How could this be?! It’s impossible! Go back to your hotel and turn on the TV and all you’ll see in the commercials are this guy’s face! We can’t be losing money on someone who borrows millions from us.” I had to respond, “Well, stop waiving all his fees and giving him all those interest breaks just because you think he’s important. He’s sucking your institution dry!”

That night, his jolly face was all over my TV. Any guesses who he is in real life? It would be so much fun if I could tell you.

Moral of the story: If you convince loan officers you are important, they will drool for your business so much so that you can get the upper hand.

Related: How To Become Rich – It’s More Than Millions In The Bank

This is especially true in small towns – a lot of bankers don’t have a clue what they’re doing. Heck, half of them don’t even know all the industry jargon.

One woman told me she told got her position because, “My dad plays golf with the president.” It’s funny every client wants to know what the other client is doing to make money. It’s like they want me to help them cheat on a test.

Bankers today need you more than you need them. People aren’t borrowing like they used to. I know farmers cash flowing their operating costs into the millions. Next time you apply for a loan, remember YOU are the important person in the room. Don’t feel intimated.

A bank has the opportunity to make money off you by two ways: by hammering you with fees (like overdrafts) or by charging you interest. They make a bit by investing your money as their own but this is harmless to you.

So distance yourself from fees and get your interest numbers as low as possible and you’ll be pretty safe.

4. How to: Never Pay An Overdraft

If you get an overdraft, don’t freak out! When I transfer money from a bank account into my Vanguard investment account, I sometimes take money from the wrong bank. Honestly, I’ve done this a humiliating 5 times. Never once have I paid an overdraft though.

Most banks don’t want to tick you off, so they will usually waive first overdraft as a courtesy. Just simply ask for it to be waived. Easy peasy lemon squeezy. One bank waived my first overdraft without me even asking (Ally Bank).

After that first waived fee, the bank may not be so kind. Those overdrafts are what keep the lights on at most banks. Banks LOSE money on checking accounts unless they overdraft.

I help assign costing for banks. Whenever someone walks to the copier, prints a statement, or opens a new account, I assign a cost. I put a dollar on everything. Based on a costing study, the average cost to open a checking account is $125; maintenance is $10 per month.

The only reason they offer that unprofitable, pain-in-the-butt product is in hopes that it will be your gateway drug. Once they have you in a checking account, they hope to soon see your mortgage, car loans, refrigerator loans, candy bar loan, and all the other ridiculous loans people seem to enjoy.

So if your bank doesn’t want to forgive your overdraft, casually mention to a bank manager that you’re looking to buy a house soon. They’ll want that mortgage.

They will treat you like a valuable customer – one who definitely deserves an overdraft to be waived – and also a steaming cup of cappuccino while they take care of, “this silly mistake.”

Farms and car dealerships are two of the most profitable businesses across the US the past few years (along with churches as puzzling as that may seem).

As I said earlier, bankers love preachers but hate teachers. Teachers don’t make much money and they’re known for being frugal.

Why love preachers? Bankers want to go to heaven. As part of my job I assign a risk code to each customer to see if they should be granted a loan (and if so, at what % interest). Most bankers, especially in the Midwest and south, get scared when I try to assign one to a preacher. They throw their hand over my keyboard and say, ‘he’s approved.”

So there you have it, 5 facts that will help you win with your bank.

But if after reading this article you’re still struggling… become a preacher.

Have you ever paid an overdraft or done any of the above? Anything on this list surprise you?