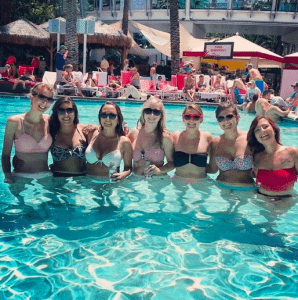 We spent most of our time at the pool, and it’s where we probably had the most fun. I’m in the white swimsuit 🙂

I’ve been to Las Vegas a few times now.

I’ve done three girls’ trips there in the past few years with my friends, and I also went a few times when I was under 21 with my family.

One thing that I was surprised by this time around was the weather. It was a cold 60 degrees each day, which is a huge difference from the 90 degree and extremely humid days that St. Louis has been experiencing.

Las Vegas was a lot of fun. Me and 6 of my friends (and one girl who now lives in Las Vegas met up with us as well) went to Vegas for my bachelorette party. We left at around 11 a.m. on Wednesday and came back at around 6 p.m. on Saturday.

I’ve gone to Vegas with this same group of friends three times now. It was my sister’s first time though, and it was also right after her 21st birthday. She had a blast and I know she’s already waiting to go back!

If you are interested in past travel recaps of mine, check out the below:

Did I work at all?

One of my goals on this trip was to put my laptop away and actually enjoy myself on a vacation. I am happy to say that for the most part, I actually did not work. I worked entirely from my cell phone and didn’t even bring my laptop. This meant that all I really did was handle urgent emails and make sure that nothing insane would happen while I was gone for 4 days. I don’t think I worked much though. I maybe sent out 10 emails while I was gone.

It was a little hard to completely separate myself from work, but it was also nice at the same time.

Even though it was my bachelorette party, I’m always looking to save money when on vacation. Why spend money when it takes just minutes to save hundreds of dollars?

The total cost for this vacation for me was less than $300.

I believe my friends spent right around $500 each, which is a cheap budget vacation for all of us! It was a little more expensive for them because they paid for some of the costs for me (such as hotel and a Vegas show) since it was my bachelorette party – and we have always covered the costs for bachelorettes at past bachelorette parties. However, $500 total for Vegas including airfare, the hotel, food, etc. is not a bad deal!

We stayed at the Flamingo. No, it’s not one of the most glamorous hotels, but it’s right in the middle of The Strip, the rooms are updated, and the pool is one of the best on The Strip. People actually leave their nice hotel pools on The Strip and pay to go to Flamingo’s pool, so there must be a reason for that!

We had two hotel rooms, since there were 7 of us. The 8th girl lived nearby and went home since she had work during the week.

We stayed at the Flamingo in 2012 when we all last went to Vegas, and we loved it last time so we booked it again this time. I believe the total cost was $580 (including all taxes, resort fees, etc.) for all 7 of us in 2 adjoining rooms for 4 days/3 nights.

I also brought my Total Rewards card and we were upgraded to a Strip View for free and received early check in for free as well. Even though the hotel wasn’t in my name, the super nice worker said that we could use it anyways because they were not strict about that policy.

Definitely sign up for your Total Rewards card before you go to Vegas. I believe it saves you 10% at many of the hotel gift shops, it allows you to skip the checkin line at many of the hotels, and you also get to waive the early check in fee (which is $30 per room!).

Total for the hotel: $0. It was $580, but since I was the bachelorette my friends would not let me pay. $580 split among the 6 of them though was still a steal!

We all live in the St. Louis area, so taking a plane to Las Vegas was our best bet. Luckily, none of us had to pay a lot. I earned enough points through Southwest to get free/cheap airfare for 5 of us. Read How I Plan on Getting $2,500 in Airfare to Las Vegas for CHEAP.

Then, one of my friends had buddy passes through Southwest which meant that two of the girls also got to fly for free.

Roundtrip airfare from STL to Las Vegas tends to run around $400, and I got it for a very cheap price for all of us. I had around 84,000 rewards points for multiple roundtrip tickets.

We also took several taxis for our trip. We took the taxi from the airport to the hotel and back again when we departed. Then, each night we went out and took taxis from there and back so that we wouldn’t kill ourselves walking in our heels. The taxis weren’t that bad though. I think I spent around $50 in taxis altogether.

Total for gas and transportation: $50. I believe they each paid around $150 in transportation though since they all split the cost of the 7th plane ticket.

We didn’t spend a ton on food when we were in Las Vegas. Since we’ve all already been so many times, we were a little bit more lazy since we’ve already tried a lot of the restaurants there. This time, we mainly wanted it to be more relaxing and save time so that we could lay out by the pool each day.

We went to Walgreens on the Strip when we first got there. We all stocked up on drinks (and alcohol), snacks, and food (bagels, peanut butter, sandwich stuff, etc.) for the whole trip. This way we didn’t need to get breakfast each morning since we would all be too tired anyways.

For lunch each day, we ate at the pool. Surprisingly, the pool’s food was very good and surprisingly cheaper than we thought. I bought chicken tacos and tater tots (LOL, I know) for $12.

For dinner we tried a different place each night. With drinks included, I think I spent around $30 each night on dinner, which isn’t bad at all.

Drinks were super cheap for us. Luckily all the promoters and clubs want big groups of bachelorette parties, so we were able to get open bar and free tables each night. It’s nice to be a girl! We went to Surrender one night, and Tao the next night. The third night we had a free table as well but we decided to roam the Strip, people watch and drink instead. It was a lot of fun!

We also went to Thunder From Down Under, which is actually our FOURTH time going. I know, I know, we are a sad bunch of girls 🙂 Since it was my bachelorette party, they all split the cost of my ticket, which was very nice!

Total for food, drinks and miscellaneous expenses: $150. This would have been a little higher, but my sister was adamant about paying for some of my meals. Love you Lexy! For the others, they probably spent around $225 each (because of the Thunder From Down Under tickets).

Have you ever been to Las Vegas?

What’s your next planned trip? What was your cheapest vacation ever? 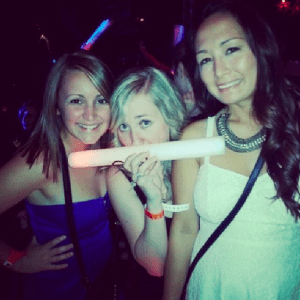 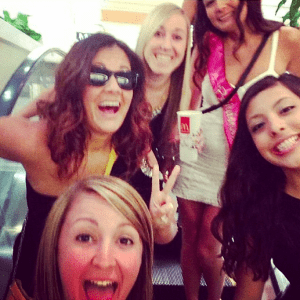 Fun times on the escalator haha. And don’t worry, that’s wine in my friend’s McDonald’s cup. 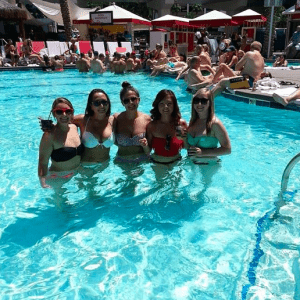 We spent a TON of time at the pool. 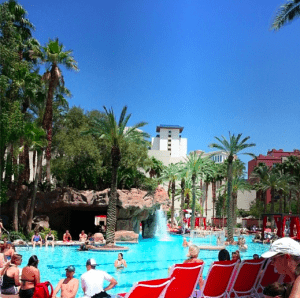 Another day at the pool! 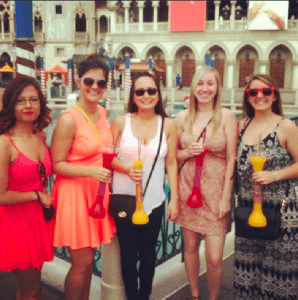 This was our first day when we first got to Vegas. I had a mango drink that was $14. 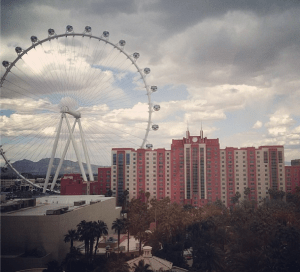 This was our view from the elevator on our floor. The view from our room was Caesar’s Palace!