Earlier this month, I came across the article It’s my money and I’ll spend it how I want to. As soon as I was done reading it, I knew I had to do a follow up to it.

I’m in agreement with the author – I don’t care what others spend their money on, and I wish others didn’t care about what I spend my money on.

As long as you can afford whatever you are buying (I’m assuming you don’t have $200,000 in credit card debt and are not still buying useless garbage – but, wait, is that judging right there? Yes, I guess I just judged), who cares (as long as it’s not illegal of course)?

People are usually rather quick to judge another person. I’m not going to lie – I have judged others too quickly and have regretted it many times in the past. Also, as a personal finance blogger, I have seen a lot of financial mistakes and sometimes it’s hard not to judge. Sometimes the answer is so clearly there but how do you tell a person?

However, lets get past obvious financial mistakes. Today, we are just talking about judging others for what they spend their money on.

Often, I see others judging people on what they spend their money on. It’s not like it affects you, so why do you care? I could understand more if their spending habits were affecting you, but they most likely are not.

Everyone is different. Some prefer to spend their money on a vacation, whereas others think vacations are a complete waste of time and money. Some have hobbies such as collecting coins, whereas others just don’t see the point in that.

The thing is, no one in the world is exactly like another, so who cares if they enjoy different things than you do?

Here are things I enjoy spending my money on:

I’m definitely not a world traveler or a person who drops thousands of dollars a day when I’m traveling, but I do like to take the occasional vacation.

Most of my vacations are fairly cheap, and I do try to barter, use rewards points and so on in order to make my trip as frugal as possible.

To me, vacations are a great way to relax, and they can be a lot of fun as well. I enjoy getting outside and trying new things such as eating fun meals from wherever I am. 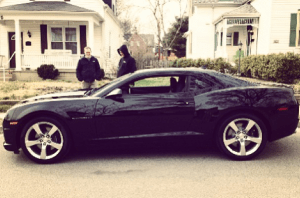 We have two nice cars.

Yes, I know, I am a personal finance fail according to many others.

We have a Camaro 2SS that we bought last year, and two years ago we bought a Jeep Wrangler, both brand new.

AHHH I know, the amount of judging I have felt because of this.

We don’t have our cars because we are trying to show off, however, that’s what many people think we are trying to do. Everyone enjoys different things, we just so happen to enjoy our Jeep because we can drive to fun places in it, and the Camaro is great because it’s a fun car.

Just because you don’t think cars are fun doesn’t mean that everyone else agrees with you. There’s a reason that there are car clubs (yup, we’re members of a Jeep club where we live – there are meetings, food outings, and rough trail driving) out there, because people enjoy them!

Many people also don’t know the whole story. Wes used to sell new cars, so we know how the car buying process works and we also received a hefty discount for working for the car brand.

I bought a house at a young age.

I have definitely been judged for this one.

We bought our house at the age of 20, and many people have judged us for this.

Some assume that our parents bought the house, that the house doesn’t exist (you would be surprised if I told you how many people thought we were just lying about the whole thing), that I actually live in a box (I still laugh when I hear that one), and so on.

There are many reasons for why we bought our house so young, and I’m still glad we did it. We love our home and wouldn’t change a thing.

I’m having an expensive (well, expensive in my mind) wedding next weekend.

Our wedding will cost around $20,000 to $25,000, including bartering that I have done, which is more than I thought we were going to spend.

I have had expensive wedding regret too, which is something that I am thankfully getting over. There are also times where I have felt guilty for having this wedding, when I know that others around us aren’t doing as well with their finances.

I haven’t felt too judged for having an expensive wedding yet, but there have been a couple of instances where others have been confused because they don’t think a personal finance blogger should be spending that amount of money on a wedding.

We have saved for quite some time for this (we’ve been together for 8 years!), and we really wanted to have a big party/celebration because that’s just what we like. I have also had a ton of fun planning the wedding, and I wanted a way to bring our families together.

What do you like to spend your money on?

Do you judge others on what they spend their money on?