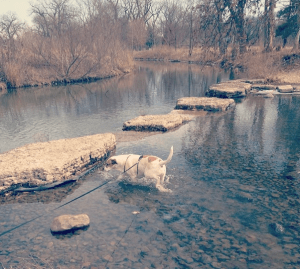 Hello! I hope all of you had a great weekend. We didn’t do too much. We took advantage of the good weather and went to Forest Park one day with one of our dogs and then rode our bikes on Sunday.

It was still a little cold, but luckily it’s supposed to be around 75 degrees tomorrow and Tuesday. Don’t worry though because this awesome weather goes away and on Wednesday it is supposed to snow.

We plan on going to Elephant Rock (around 1.5 hours away) today, have you ever been? Do you know of any good hiking or outdoor spots in Missouri that we may be interested in?

We still have the squirrels. I’m sure everyone is annoyed of me talking about them, but it’s pretty much all I’ve been thinking about lately. I think we are going to ask for a refund from the pest company, because we thought the squirrels would have been gone by now and I’m really nervous that there are going to be babies soon.

Wes talked to a new person the other day (he used to work with this person at a different job) and he said he could get the squirrels the first day, and it sounded like he had a much better plan. Plus, this guy is going to do it for around $300 cheaper since he’s just going to do it on the side.

They are starting to get louder, and birds have moved into the soffits as well because they have destroyed so many, so now we are in an extreme rush to get them out.

We also bought a Sam’s Club membership and stocked up on a lot of food there. We noticed that a lot of things that we were wanting were significantly cheaper at Sam’s Club (we looked at their prices online) than the grocery stores near where we live.

For example, Sam’s Club had chicken for around $2.50 per pound, whereas at the grocery store near me it is usually $5 or $6 per pound. We were also able to save on many other food items (granola bars, nuts, fruit, drinks, etc.).

The membership was $100 though because we bought the “Plus” membership. They said we could get it refunded and get the cheaper membership for $100 if we found that we didn’t use it enough within the first year.

Do any of you have a Sam’s Club (or CostCo) membership? Have you found it useful?

Business has been really good in March so far, and I have a really good feeling about the rest of the month. I even have some short-term jobs (mainly short-term website management) already scheduled for April and May, which is awesome!

If anyone needs any help, check out my Hire Me page and let me know what services you are interested in.

I have been doing okay with being healthy, but I do think I could be doing a little bit better. I think I worked out two times last week, but that also doesn’t include the park walk (we walked our dog for over an hour) or the hour long bike ride over the weekend. I’m hoping to get back into the workout habit this week.

We also haven’t been doing the greatest with eating at home, which kind of stinks. If you have any delicious, but still healthy, recipes, please share them below! I just haven’t been in the cooking mood lately.

There are still so many things that we need to do. Our wedding is a little less than 3 months away now, and I can’t believe it. I still need to create a wedding website. If you were a wedding guest, what would you want to see?

I registered online at Target the other day, but we may head into Target to register for items that we know for a fact are in-store so that we don’t cause any problems for people who only like to shop in a store instead of online. I mainly registered for home office things because I couldn’t find anything else that we would need.

We are thinking about registering at REI (for camping supplies – tent, chairs, pots, pans) as well, but a few people have told us that it is tacky and that we should only be registering for kitchen stuff. WE HAVE KITCHEN STUFF THOUGH! 🙂

Have you been doing well with your income, spending and being healthy?