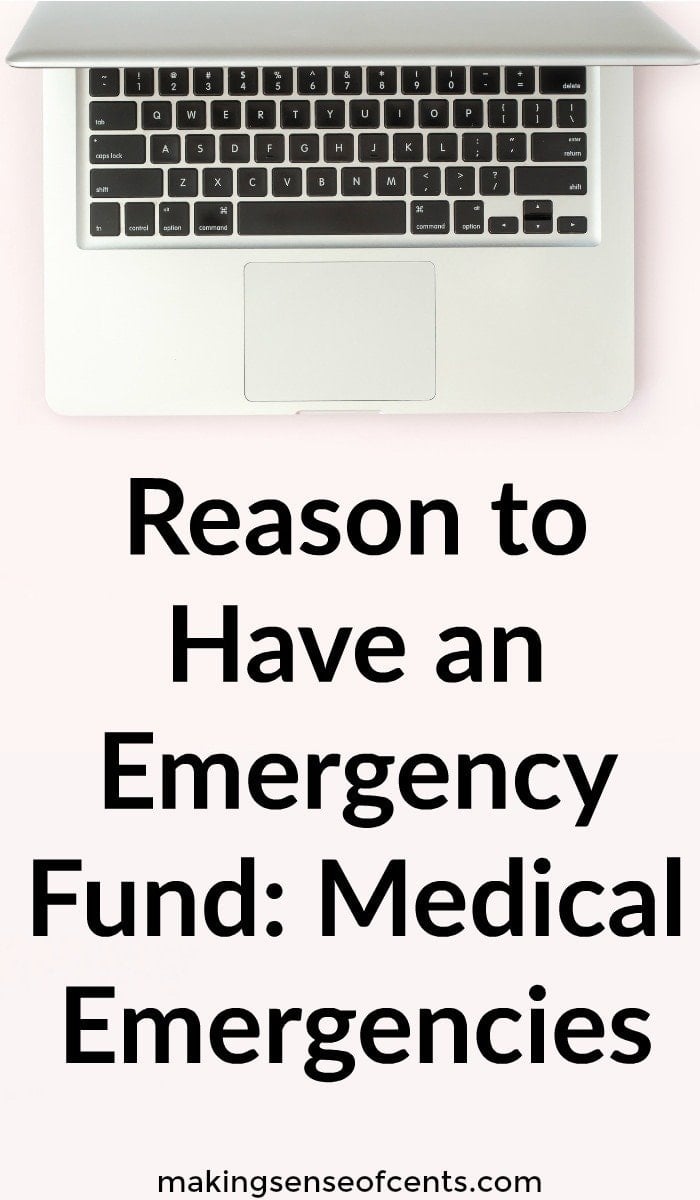 Enjoy this post from my blog friend Natalie. Emergency funds are extremely important, especially in the case of a medical emergency where you have to pay a large amount out of pocket.

A few weeks ago, I had one of the scariest things happen to me.

My long-time partner and boyfriend began to start getting really sick. This wasn’t just a case of a fever and the sniffles.

The symptoms were a little bit more serious than that. He began to get severe stomach pains along with a completely loss of interest of eating or drinking.

I will spare you the more gruesome details but it got really bad. It finally ended with his fever spiking to almost 103 degrees and me rushing him to the emergency room of the hospital.

Suddenly he was extremely lethargic and could not even get out of bed. The once fun-loving person that I knew was being taken over by some invisible and frightening ailment.

The night I finally took him to the emergency room, my boyfriend was in a state of panic.

He was worried about the financial aspect of him having a medical issue.

His fever was out of control and he could barely stand up. He was also in a state of panic because of the costs that would be incurred from all the emergency room bills. I told him to basically shut his mouth up over those types of thoughts as his first priority should be his health.

I didn’t fault him for having thoughts like these.

We just happen to be a couple that care a lot about money and we both work hard to be financially stable. When something like this happens, many would feel unsure about how they will pay such medical costs. This is certainly true in the United States.

My boyfriend was lucky enough to be immediately seen by the medical staff. They ran a series of tests and discovered that his colon was very inflamed. Under the doctor’s orders, his health had been deteriorating to the point where it was decided that being hospitalized was the only option.

My boyfriend’s reaction went into further panic as he realized what this meant especially for the finances.

I tried to convince him of otherwise as I knew stressing out could only make his condition worse. He was placed in a hospital room where he could be monitored by the professional staff.

For the next couple of days, my boyfriend was given several procedures and medications that at first did nothing. I went to the hospital every day and tried to console my boyfriend through this difficult time.

He once again expressed his fears of the cost of being in the hospital. I let him know that there is not enough money out there to replace someone’s health.  I also reminded him that we had an emergency fund that was precisely for occasion like this as this was a bona fide emergency.

There is no bigger reason to have an emergency fund than in situations like this.

You just never know when the proverbial crap will hit the fan and require you to have liquid assets available.

We had absolutely zero notice that something like this would happen. Medical situations are one of those things that usually pop out of nowhere and can be very destructive if you are living on the financial edge.

The truth is there are too many people out there that are living paycheck to paycheck. Too many people do not think of having a form of savings as a priority and nothing could be further from the truth.

I once had a friend that had some major complications due to her high-risk pregnancy. She never took the time to save as she felt it more important to buy nicer handbags and other pricey things.

As a result of no savings or health insurance, she winded up with over $15,000 in medical bills.

The resulting stress on her psyche and family caused her even more health problems and later more health bills. She applied for government assistance and was given some help after a big battle with paperwork and authorizations. She could have avoided a lot of stress if she had saved something in advance.

As I write this, my boyfriend is still recovering from the hospital and will hopefully be home soon. He finally accepts the fact that it will not destroy us financially since we have a savings fund and health insurance that has a set limit on what we are liable to pay.

Being able to concentrate on what is important is such a relief in times like these. It has literally helped me sleep at night. I can’t imagine what we would be doing without it.

Having an emergency savings account (Do you know how much you should have? – I have a related post on this on Diversified Finances) is of utmost importance especially in a world that guarantees nothing.

Taking the initiative to do something for your financial future is crucial. Learn from my own story because you just never know when you will need money now. My boyfriend and I are able to focus on plans to get him back to normal health and that is what is important. Please take the time to prepare for life’s unexpected pitfalls so that you don’t end up in the financial hole.

This is a post by Natalie over at Everything Finance.  Everything Finance is a site about just that, everything related to finance.  You can get information about investing, saving money, insurance, shopping, blogging, CD rates, and making money online.

Do you have an emergency fund? What does it cover?