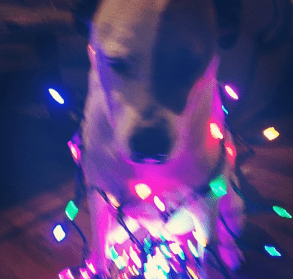 This is a Pinterest Fail of mine from last year.

We still haven’t done much holiday shopping yet. Luckily we aren’t celebrating Christmas with W’s family until the 28th, or we would be in trouble. We have many presents left to buy still. We also don’t even have a single present under the tree because we have been lazy.

How much have you spent on the holidays so far? How much do you usually spend on presents? Share in the comments below!

The day after we got back from our trip, W went up to the classic car place and signed the truck title over. It is officially sold.

The dealership told us that a young couple just like us bought the truck, so I at least have faith in the new owner. I am still sad to see it gone though!

We were able to profit off the truck though and put some money in the bank, so that was nice. Also, now we have one less car to worry about having to fix.

We were in St. Thomas last week. We were there from Sunday and arrived home late on Thursday. I’m sad to say that it wasn’t the greatest trip. W had some sort of stomach bug the entire time. And right in the middle of the trip I was attacked by sand fleas and received over 200 bites.

We were both stuck in the room for most of the trip!

It was definitely a cheap trip though. We spent around $500 altogether for the whole trip. That includes the taxis, food, airfare, room charges, and so on.

We haven’t done much spending, but that will change this week. We need to buy some presents and will probably spend a few hundred dollars on those.

Self-employment is still going well. I do think that the next 1.5 to 2 weeks will be fairly slow because of the holidays. However, that is fine by me! I have many things that I need to catch up on and if everyone is on a little break then that usually means that I can catch up.

If anyone needs any help, check out my Hire Me page and let me know what services you are interested in. Lately, a few other website owners have asked me to help run their website while they are gone for just a month or two, so this is a new service that I am also offering. If you are starting a new job, about to have a baby, want to do some long-term travel or something else, please let me know.

Posts from Making Sense of Cents:

Being healthy was non-existent last week. I keep going back and forth between having great weeks and bad weeks. I will change that this week!

We are still doing well with wedding planning. We are in the process of finalizing the invitations. I am still looking for the perfect Mad Libs RSVPs for the invitations though. Have any of you ever used Mad Libs for your RSVPs?

We did have a little problem with our Save the Dates. We used magnetic Save the Dates, and USPS didn’t separate all of them so some guests received more than one Save the Date (the ones were just stuck and the postage was not even canceled out on these, so hopefully all of the guests just put it back in the mail). It was a little frustrating because we have had a few people joke about being uninvited. AH! I’m not even sure how many people this happened to.

I am also in the process of finalizing the contract for the hair and makeup for myself and the bridal party as well. I plan on gifting either hair or makeup. It will be around $100 per girl, and probably around $200 for myself. Definitely a lot of money! How much have you spent on hair and makeup at a wedding before? Also, if you have been in a wedding, would you prefer to have hair/makeup paid for, or would you rather receive actual wedding gifts from the bride?

We still haven’t finalized any contracts for wedding rentals or food yet. We plan on doing that within the next week though. These are things that we really need to do.

Have you been doing well with your extra income, spending and being healthy?

What are your plans for the holidays?