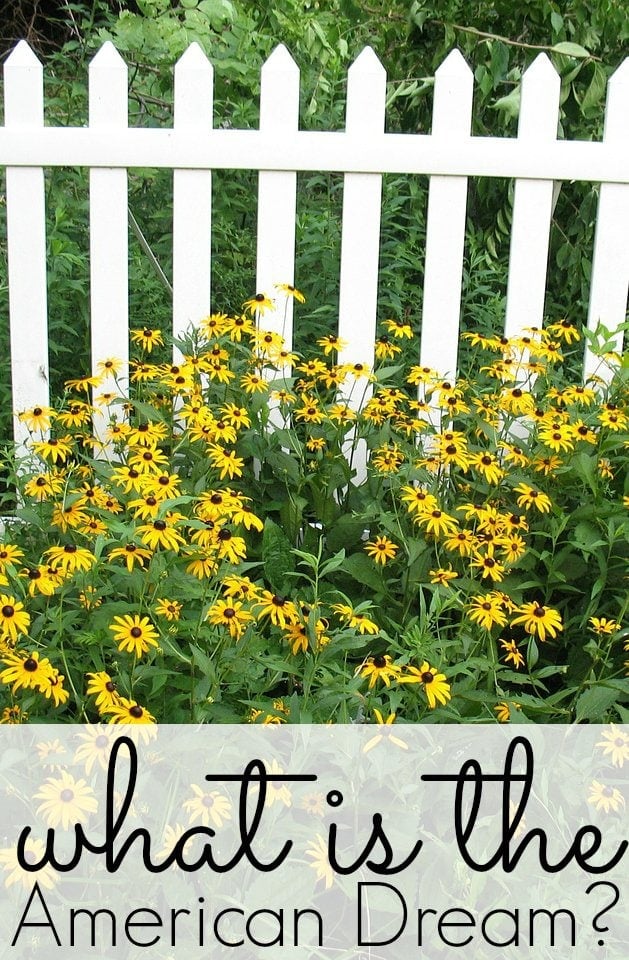 As a personal finance blogger, I of course think about finance a lot.

Numbers and statistics interest me. While I was at FinCon, I received several sets of interesting statistics, and I wanted to share the stats from Chase about the American Dream in 2013.

I think about my Dream a lot. For the longest time, I was letting money control my life. I thought about money 24/7.

I calculated my budget all the time.

I thought my “American Dream” (or whatever you want to call it – Canadian Dream, European Dream, etc.) was to have a big house, all the nicest things and so on.

However, none of those things make me happy, so why did I even care?

What is the American Dream?

I am finally self-employed, and this feels like the “American Dream” to me. I don’t know how life could be much better right now! I have many dreams though, just like most other people.

Survey-takers stated that owning their home, getting married, having children, getting a college degree, and retiring at 65 were their dreams. Also, I thought it was kind of surprising that only approximately 20% thought that starting their own business was a part of their dream.

More than 77% considered homeownership the number one symbol of the American Dream.

I grew up and moved around a lot, and we always rented wherever we lived. When we bought our current house 4 years ago, I was definitely excited. It was definitely a financial goal of mine since I never really had a “home” that was mine since we moved so often.

Back in April, I published an article about whether I should pay off my house early or not. While we have put our home-buying process on hold, we do not plan on paying off our current home quickly. However, for our next house, I would like to buy it in cash or primarily cash.

With regards to housing – I want a paid off house. This is a part of my dream.

My Dream also consists of me being able to travel the world. I have been making many excuses lately, but I really want to start making a plan for long-term travel. I don’t even know what my first step should be!

What about family and the Dream?

I reconnected with family over the weekend, and I honestly couldn’t be happier. If you follow me on Twitter, then you saw how nervous I was for the week before I left St. Louis to see them.

My Dream includes continually building on these relationships. Family is important to me. I am willing to put things behind me in order to live a more happy and healthy life.

We also want children. We thought that we would wait until our 30s, but now we are thinking before then. My Dream definitely includes children. I never really had a close family, and it is something that I often dream about.

What did the survey takers say about children? 60% think that having children requires a dual income, and 37% have delayed starting their families because of finances.

As a personal finance blogger, I have seen a few bloggers and readers who have completely ruled out having children purely because they think they are too expensive. I personally couldn’t place a monetary value on children, but I know that others just can’t justify the cost. What do you think?

What my Dream is not.

I have many dreams, and if you are a long-time reader of my blog, then you know that I change my mind a lot. Oh well, at least I can admit that.

My dreams do not include a mansion, super nice cars, a boat (okay, maybe a small sailboat would be nice), an airplane, an elevator in my home and so on.

I do not need things like the above in order to make me happy. I have stopped letting money control me. Life is about experiences and spending time with those that you care about.

How do you obtain your Dream?

What made me really happy about this survey was that only 20% thought that reaching a dream was only for rich people. 55% believed that the Dream can be achieved through hard work.

Is early retirement a part of the American Dream?

Also, approximately 34% do not think that reaching retirement at 65 is possible.

67% also never see themselves fully retiring. They think that they will be working a part-time job, and I think I would be the same. However, the reasons that the respondents stated were that 50% think that they would need the extra income in order to survive.

What is the “American Dream” to you? What are your financial goals?

How are you trying to achieve your Dream?