I have a Jeep Wrangler (pictured below). We received a great deal on our Jeep. We bought a new Jeep for around $4K off the dealership price. And it was the only one in around a 500 mile radius, so when we found it at the dealership, we knew it was the one. 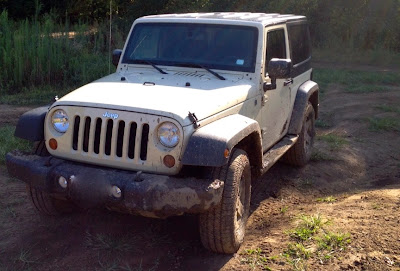 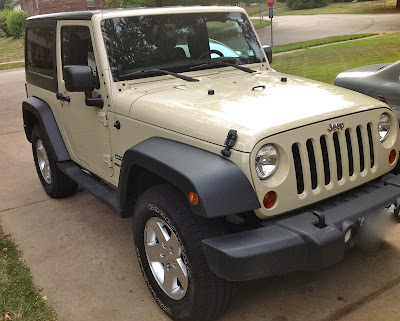 The top picture is after he took it out for fun when we first bought it. Glad we have a warranty on
it because there were definitely rattles and things shaken lose after that day.

So onto the mistakes that we made. Where should I start?

We took our old Jeep up to the dealership, so they automatically knew that we were wanting to trade. This is the number one thing that you should NOT do. We didn’t do this at any of the other dealerships, only at the very last one because we were in a slight rush – Yes I know being in a rush is not good when you are also trying to buy a car.

We still got a decent amount on our trade in, however, I do believe that we probably could have gotten at least another $1,000 off the new car if we would’ve tried a little harder. Not going to lie, the fact that we were rushing ourselves hurt us in the end.

We would’ve tried harder, but we were supposed to buy a Jeep at another dealership, but they gave us the run-around 5 or 6 times (we both even took off work because we were told that it would be delivered to the dealership). We signed papers and everything, and it turned out that they NEVER EVEN HAD THE JEEP. And in the end, they told us that they were never even going to get it. We wasted vacation days and gas driving up there multiple times.

We put a down payment and filled out so many papers for this Jeep, and it never even existed. It was very aggravating. They were very sorry though and refunded it once they realized that everyone at their dealership is insane and didn’t know what the others were doing.

So by the time we found the tan Jeep Wrangler that we wanted, we were pretty much just fed up and wanted to get a car ASAP. This led us to making many mistakes.

Other possible mistakes that you could make:

1. Only looking at dealerships near where you live.
If your car has a warranty, then usually any dealership within that brand will service your car. We bought our Jeep at dealership over 30 miles away, and we have had somethings repaired (mainly rattling from taking it off-roading). We were able to just bring it to the dealership which is right up the street from us. Saves us time and lots of gas money.

2. Not deciding on what you want before you go.
If you decide that you want a car one day, and then just stroll into a dealership with NO IDEA whatsoever, that is pretty much just a disaster waiting to happen. Car salesmen can be very good at their jobs, and you might regret what you bought the next day. Having some sort of idea of what you want (SUV or car, brand, fuel efficient or not, and etc.) is a good idea.

3. Not taking the car for a test drive.
When I bought my ex-car back in 2008 (my Scion tC), I wasn’t able to test drive the exact car I bought (it was being factory built), but I was able to test drive a very similar one. Not test driving at least something similar might not be good because you might not like the way the car handles or sits.

5. Not looking for the best interest rate.
We found a credit union that gave us a great rate. Of course dealerships will offer you financing, but try looking around at banks and credit unions first. We found the best rates at all the credit unions. We were offered 0.9 to 1.9% at credit unions, while the dealership could only go as low at 2.9%, so I would definitely check out credit unions if you can.

What car buying mistakes have you made?