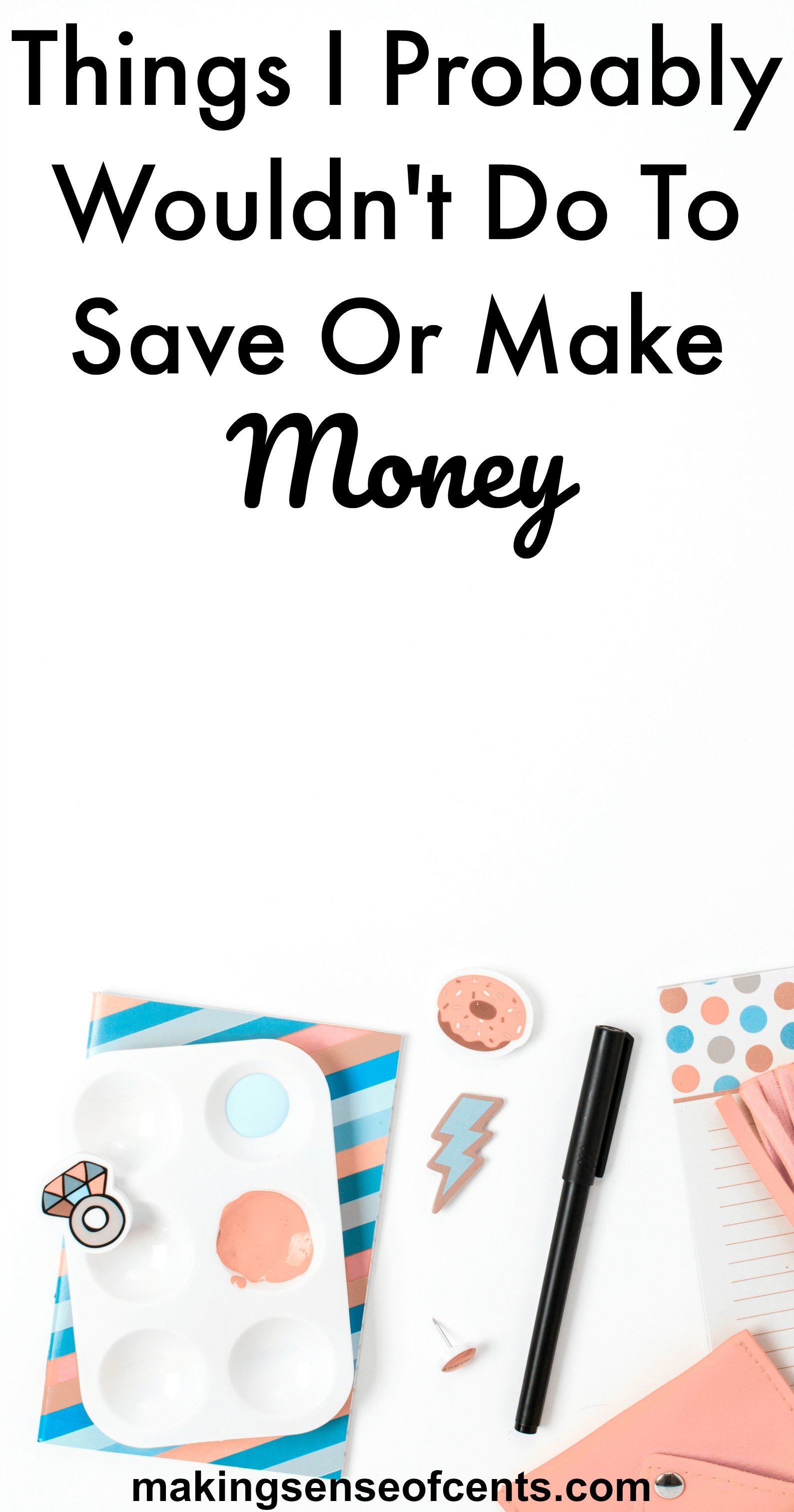 Today’s post is a little different than my usual posts. Lately, I have been talking a lot about different ways to save money. Whether it’s cutting cable, frugal entertainment, cheap and healthy food, and so on, there have been a lot of budget-related posts on Making Sense of Cents lately.

Well, what about things that I won’t do to save money? There’s room on a personal finance blog for that, right?

I’m not the most frugal blogger, and I’ve said that before.

A little note: this post is not meant to be rude in any way. These are just things I personally would not do unless I really needed to. There is nothing wrong with anyone who does any of the things listed below because different people like different things. Simple as that.

Walk all the way to work. My work is 12 miles away, by highway. If I wanted to walk, it would be very difficult and longer than 12 miles because I of course do not want to walk on the highway. The weather here is never consistent, so I would probably be either sweaty, smelly, or drenched from rain. St. Louis is not the greatest for walking. Walking would also take a very long time.

I would never put my dog’s health in jeopardy to save money. I always tell people this, but I know of someone who put their dog down to save $100. It cost $150 for a lotion and around $50 (maybe it was $35?) to put their dog down. They chose the cheaper option…

I would never not have pets just to save money. I like pets. My dogs are my world. I understand that some people don’t want a pet. To each their own!

Take part in medical research that could lead to my toe getting chopped off or involves needles. I know of a couple of people who have done studies that only lasted a couple of days but paid thousands of dollars. I could never do that though. I don’t like needles or my blood drawn. And I’m terrified of any side effects.

I won’t sit at home and LITERALLY stare at a wall to save money. There are many frugal activities out there that are fun and free. No need to stare at a wall just because you want to save some cash. Don’t get me wrong, I LOVE spending time at home and just relaxing, but staring at a wall for 365 days a year is just not for me. If you are looking for fun ways to save money, you could watch a movie at home, read a great book, cook a delicious dinner, have friends over, play a board game, and so on – I could do all of these things all the time!

Steal. I would NEVER steal just to save or make money.

Live in someone’s attic and come out whenever they left. I read this story once as well. This person lived above the homeowner’s closet and would come out whenever they went to work or out with friends/family. This person would eat their food and use their toilet paper. One day the homeowner started noticing weird things and marked their milk and toilet paper and noticed that stuff was missing.

Steal ketchup packets and squeeze them one by one into a ketchup bottle. I saw this on TV once. This guy won an award for being the cheapest person ever. I’m not even kidding! His wife was trying to get him help because she was tired of how cheap he was.

I will not wear used underwear. Just not my style…

Not tip just to save money. Everyone can have their own opinion on how to tip. However, if you go to a restaurant and know before hand that you will not tip just so that you could save extra money, and your waiter/waitress was wonderful, then this is just wrong. If you can’t afford to tip, don’t go out!

Would you do any of the above to make or save some cash?

What else would you not do?