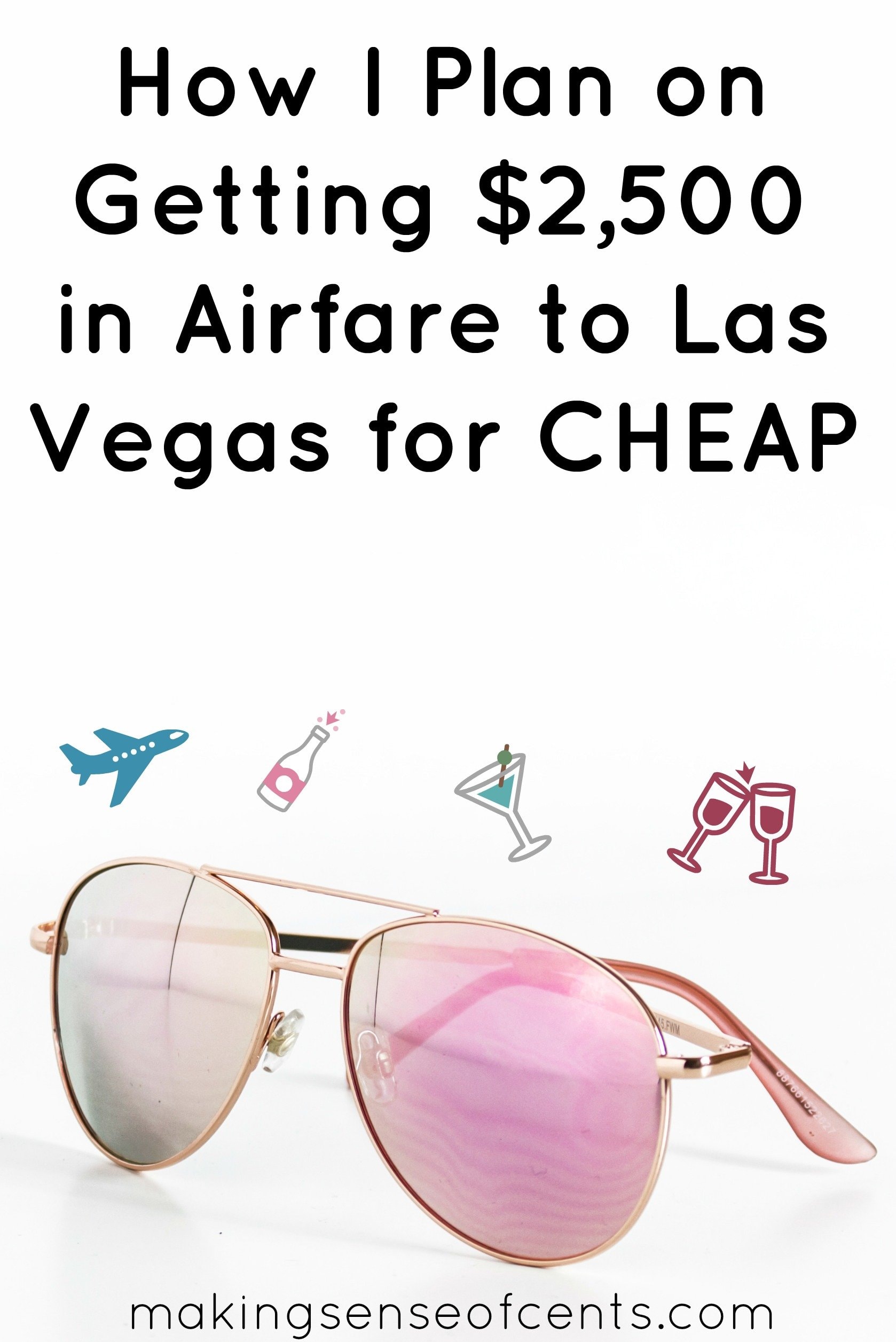 Yesterday, I mentioned that I am currently planning the airfare part of my bachelorette party. They didn’t ask me to, but I want this to be a part of their gift from me. My money saving tip is to create a plan on how to go to Las Vegas for cheap for all of us. Doing Las Vegas on a budget is possible!

EDIT: This trip was amazing. Please check out Las Vegas Recap: My Most Frugal Trip Ever.

Since we are going to Vegas, I do want to help with the cost of airfare since that can be fairly expensive. Don’t worry, I’m not forcing anyone to go and spend money at my bachelorette party, as we all go on a yearly trip anyways, so this will just be our yearly trip as well.

However, there are EIGHT girls in my bridal party, and almost everyone is going. There will be eight of us altogether in Vegas, and a couple of others will most likely meet us there as well (but I won’t be paying for them).

So, how do I plan on paying for 8 girls to go to Vegas for cheap? Yes, I could just pay for it in cash, but that would probably be around $250 to $350 per person for round trip tickets. That could be up to $2,800 in airfare. That would be insane to spend that much money to get to Las Vegas.

I’m doing a mix of things so that we can vacation in Las Vegas affordably. I do get very cheap airfare through my dad’s retirement benefits that I inherited, but I don’t plan on using that. There are no direct flights from St. Louis to Vegas, so it would be too difficult to shuffle 8 girls on standby and with there being multiple layovers most likely.

We are going to Las Vegas in May of 2014. This will be our third group trip to Vegas and we are all super excited (well, at least I hope they are!). We have always been able to go for super cheap thankfully. The first time I flew standby so it was cheap (there were only 3 of us girls who went that time), and the second time there were 6 so I used some points and was able to get some tickets for cheap.

We have been able to get really cheap hotels each time. I think last time our total was around $600 for 2 rooms for 4 nights. Not bad at all! And we had a Strip view.

How I will get two tickets so that we can get to Las Vegas affordably.

The first two tickets so that can doLas Vegas on a budget are super easy. My friend can get two standby tickets through Southwest. Of course, this isn’t a gift from me at all, but I’m still counting it towards our frugal bachelorette trip savings.

I’ve heard of crazy Bridezilla stories where the bride makes her bridal party pay for everything including multiple destination bachelorette parties. And some crazy Bridezillas get very angry when the whole bridal party can’t fly together, but I don’t care. I don’t get why anyone would through a fit over that.

I want my friends to go to Las Vegas on a budget and that is my plan for the first two tickets.

How I will get the other six tickets to Las Vegas for free/cheap.

For the other six tickets so that we can go to Las Vegas on a budget, we will be doing something else. I have been waiting for a good credit card reward bonus to come out. Specifically, one of the Southwest credit cards because they offer a really good bonus system and allow you to buy airfare with points for fairly cheap. And since we specifically want to fly Southwest because they are the only ones who fly directly from STL to LAS, makes it even better.

I have noticed occasionally that one-way tickets from St. Louis to Las Vegas go for around 10,000 points (I’ve also seen them for as low as 8,900 points). I need eight round trip tickets, and two are now covered (as summarized above). To get the other six, I will be using rewards points.

I’m going to realistically assume that I will not be able to get enough points for the last round trip ticket, and that will just be paid for with cash. So, in total, I would be paying for one ticket out of 8 round trip tickets. Saving around $2,500 and really only having to pay for one ticket? Sounds like a great vacation to me!

Each ticket will also have a $5 charge, so I will have to pay $60 in fees for the airfare, which is perfectly fine with me. There is also a $99 annual fee for the credit card, but they do give 6,000 in points each year on your anniversary which help with that. I will gladly pay these relatively small fees in order to get over $2,000 in airfare for almost free.

Related: Are Budget Airlines Worth It? Here Are 6 Of The Best Tips To Cut Your Costs

Southwest Airlines® Rapid Rewards® Premier Credit Card in order to get to Las Vegas on a budget.

What does the credit card offer?

For a very limited time, this credit card is offering 50,000 rewards points. This is $833 in Wanna Get Away Fares. You’ll earn 50,000 bonus points after you spend $2,000 in your first 3 months of opening your account, which is currently enough for 2 average roundtrip fares when redeemed for Southwest®’s Wanna Get Away® Fares. Of course, some airfares are cheaper, and some are more expensive.

Some might think that $2,000 in spending is fairly high. However, I can just switch some bill payments (such as for cell phones, cable, utilities, etc.) over to this new card.

I signed up for the credit card and I was approved instantly.

This is a great card if you are looking to get flights for cheap and earn points for cheap flights on Southwest.

Note: If you know that you are horrible with credit cards, then I don’t really recommend getting a credit card only because of its benefits. It’s always best to be safe especially if you already know that credit cards are your weakness.

Have you ever signed up for a credit card for rewards points? Why or why not?

What was the last thing you bought with reward points?