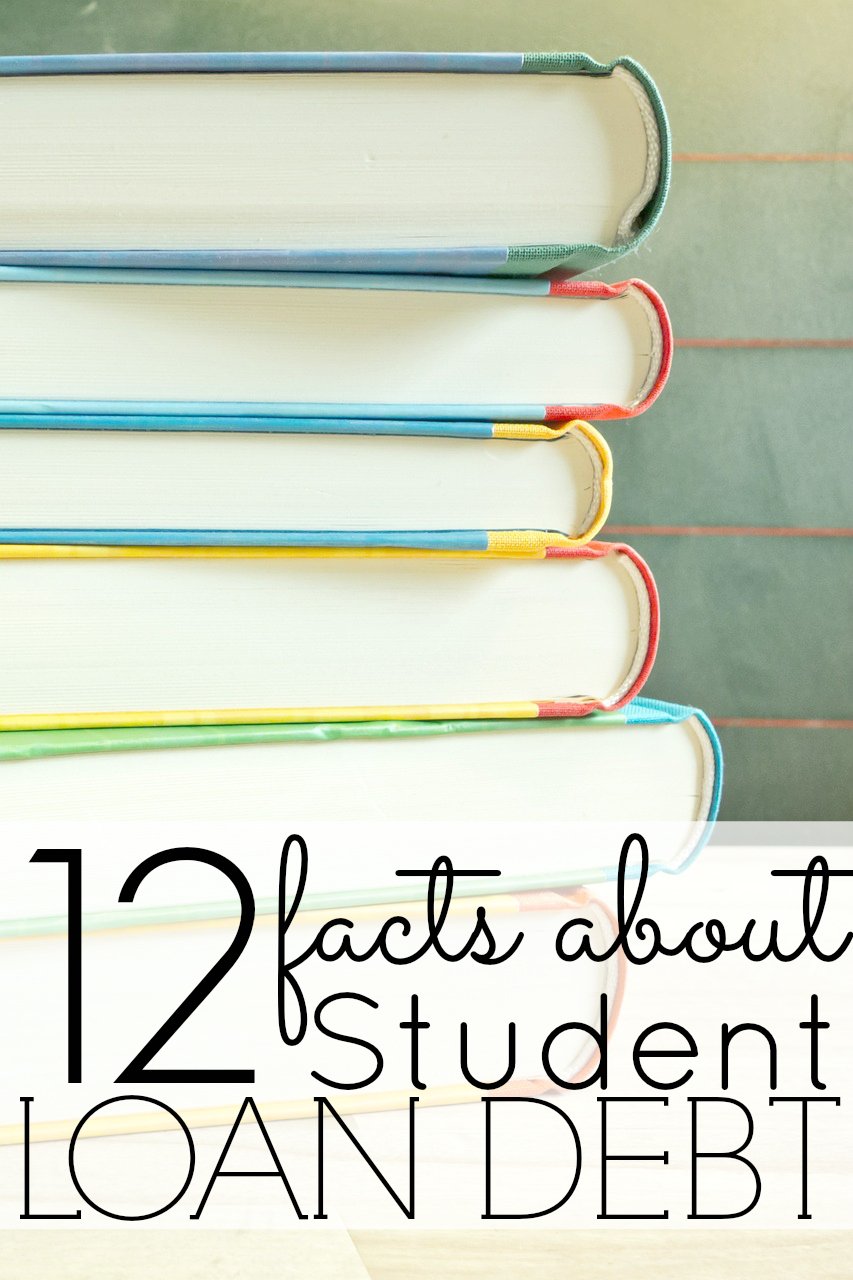 Today I have a post from Kevin and it’s all about student loans. Don’t forget to read my My $38,000 Student Loan Payoff Plan if you haven’t yet.

Getting a college education in the US today appears to be a double-edged sword. On the one hand, graduates are in a better position than those without a college degree when it comes to getting jobs. Yet with the cost of education rising, tens of thousands of students are graduating with piles of debts they spend years paying off.

Sometimes they are not able to pay, with unemployment rates remaining high and stagnant. Dogged by debt collectors, they resort to public protests and hiding. To add more props to the terrifying reality show of student debt, here are 12 facts about student loan debt that will make your hair stand on end.

1. High debt and fear of loans

Two thirds of college graduates from universities across the country in 2011 had debts from student loans, an early 2012 study by The Institute for College Access & Success revealed. There is a total of $1 trillion in outstanding student loan debt and the average debt is estimated at $26,600 per student. Fear of such high loans can keep students from receiving the education that they deserve.

As if the high cost of education isn’t bad enough, unemployment remained high through 2011 at 8.8 percent. This means that many students leaving college end up with no jobs and a high burden of debt. They enter into a life of debt slavery on leaving college and many quickly fall into default with no means of refinancing. In terms of statistical figures, one of every six student borrowers is a defaulter.

According to reports, outstanding private loan debt among American students stands at a whopping $150 billion. These private loans are issued by banks, schools, non-profit institutions and agencies sponsored by the state, as well as other financial bodies. They are also the least desirable types of loans with the highest costs.

The Consumer Financial Protection Bureau (CFPB) estimated in a report published in October 2012 that of the private borrowers, there are more than 850,000 individual private loan defaulters, with a total default amount of a staggering $8 billion.

The state-run and non-profit financial institutions that offer private loans send third-party collectors to recover the debt amounts. These debt collectors cash in on the plight of students who are strapped for cash. The New York Times reported in September 2012 that students dogged by collectors are often forced to change their phone numbers multiple times to avoid them. The CFPB reports that student complaints against private student loan companies include complaints of being unable to contact them at times of need, too much paperwork and delay in correcting errors among others.

There are 7 major companies that hold a monopoly in the area of state and federal student loan services. These include Sallie Mae, American Education Services (PHEAA), Citibank, Wells Fargo, JPMorgan Chase, ACS Education Services and KeyBank. Of these, Sallie Mae has received the highest number of complaints at 46 percent (of 2900 cases it handled in less than 7 months in 2011) followed by PHEAA at 12 percent. KeyBank has the least number of complaints against it.

The government usually recovers 80 cents for every dollar on defaulted loans. This is much higher than credit card default rates – lenders for defaulted credit cards are lucky if they can recover 20 cents to a dollar. This is a problem because the government doesn’t have any incentive to prevent the defaults in the first place.

8. A problem for all ages

It’s terrifying for many how long the burdens of debt can be carried forward or how often parents are taking out loans for their kids. A New York Federal Reserve Bank (FRBNY) report published in early 2012 showed that 5 percent of all borrowers are over 60 and 11.8 percent are aged between 50 and 59.

9. Bigger than most other consumer debt

This doesn’t come as a surprise, but the for-profit institutions and universities are the ones whose bachelor’s degree students have the highest loan debts. While public 4-year college graduates have median debts of around $7,960 (according to College Board reports) and around $17,000 for private colleges, the private for-profit college students have the highest loan debts at $31,190.

12. Highest debt in the Northeast and Midwest

In 2011, the state averages for student loan debt lay roughly between $17,000 and $32,000. The Northeast and the Midwest states had the highest average debts, with New Hampshire topping the list and Pennsylvania following close behind.

After having shared with you 12 facts about student loan debt that will make your hair stand on end, you can hardly expect me to say that it may not be entirely hopeless for you to get a college education despite the issues. But it’s true, it’s not so bad.

Over the last five fiscal years, the Education Department has made $101.8 billion from student loans with fixed interest rates. With the job market looking grim and the rising costs of education, there have been several protests staged across the country over 2011 and 2012. The government has taken note, and the White House plans to propose and implement a plan to benefit borrowers, by making interest rates on federal student loans proportionate to market rates.

In the meantime, students looking for loans should avoid private borrowing and look to federal student loans for help. There are some (rare) colleges and charities that will give you low or zero interest rate loans. But most of all, even if you have to spend some time shopping around for the best and reasonable loan rates offered, be sure not to give up on the education you deserve!

My name is Kevin Watts and I am the creator of Graduating from Debt. I was like millions of recent college graduates in heavy debt with very little hope. With the right attitude and discipline I took control of my financial picture and now I can say proudly that I am debt free.

How much do you have or expect to have in student loans?

What are you doing to eliminate them?