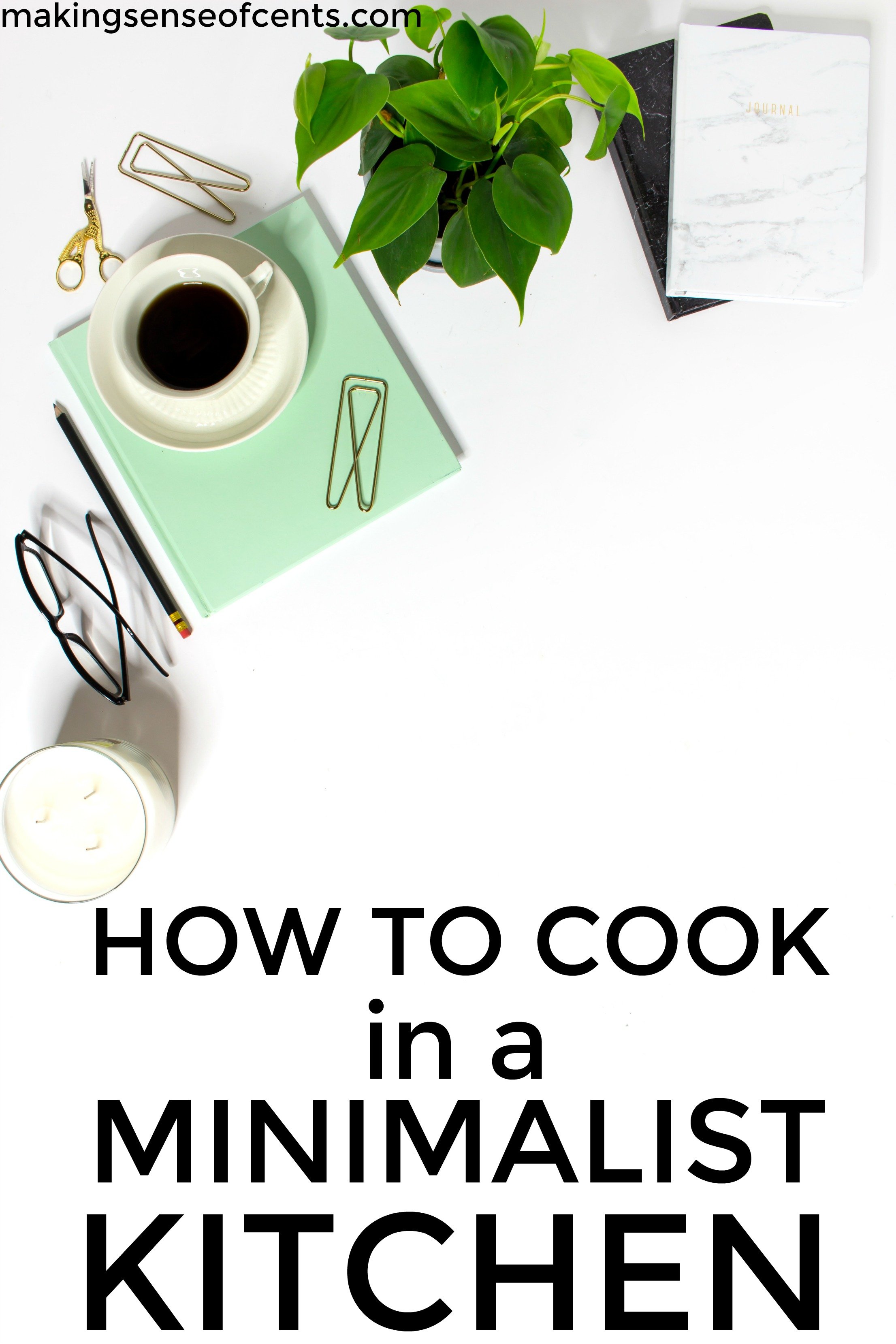 One of the things I was looking forward to the least when we moved into our 400 sq. ft. house was the tiny kitchen.

I’d been living in a one bedroom apartment for four years and then a studio, but the kitchens in those spaces were expansive compared to the tiny little space I was about to try and cram my cooking arsenal into.

My kitchen consists of two shelves, two reasonably deep cupboards, and two more that are only about a foot deep.

There’s no counter space to speak of, other than a single surface to prepare food.

I knew going into it that I was going to have to really take a look at my kitchen stuff and pair it down in order to function in that tiny space efficiently.

When it came to food preparation tools, like pots and pans, I stuck to the one of each rule. One big frying pan, one small. One cast iron pan. One cookie sheet, one big casserole dish, one small. By eliminating duplicates (many of which I’d accumulated as hand me downs through school) I was able to fit most of my cookery into one of the cupboards.

Keep Only What You’ll Use!

I think everyone reading this has some product in their kitchen that they’ve never used but can’t bring themselves to throw out or donate. Something that you think you’ll need someday, perhaps? I took a hard look at what had been gifted to me over the years and started to pair down.

I got rid of the handheld mixer (I love to cook, but don’t bake), the four beer pitchers, the small veggie chopper, and innumerable other things that I knew that I’d honestly never use. I didn’t get rid of everything though, I kept one nice glass pitcher, the gravy boat, the handheld immersion blender, our Magic Bullet, and I’ll keep our new blender until it croaks. Sure some of that stuff I only used occasionally, but it was worth hanging on to. Most of it – however, got donated.

I live with my fiance, and since our place is so small, we don’t entertain too often. Because of this, an expansive collection of plates and bowls isn’t necessary. I have a set of four bowls, plates and mugs, and that’s more than enough. A bonus to having less of this stuff is that doing the dishes is so much easier! We’re never tempted to leave the dishes unwashed, because we’ll run out if we do!

Organize and Clean Often – Be Merciless!

Living as a minimalist in a small kitchen can be a challenge. Things can get messy and out of control in the small cupboards quickly. The only way to keep things under control is to clean and organize frequently. Any food ingredient that is more than a year old gets put on the “cook with this now” list or gets tossed.

For example, I’ve had a bag of dried black beans taking up valuable real estate in my cupboard for awhile now. Our mission this month is to use them up, otherwise, they’re getting tossed! Luckily, because there’s so little space, frequent cleaning and organization sprees don’t take long.

Move the Seldom Used Items Out of the Way

There are a few things that I need for cooking, but rarely use. I hate pawing through various items in my cupboards in search of a random utensil or pan, so instead, anything that doesn’t get used regularly goes into storage in our laundry room, where space isn’t so precious.

If I need the item, I’ll go and get it. This is where I keep my crock pot, my large simmering pot, and my roasting pan.

This is the key to a minimalist kitchen. Do you really need three salad bowls of varying sizes when a mixing bowl will do the same job? Do you need a complete tupperware set when you can just throw some tin foil over a bowl and achieve the same effect?

My favourite double duty item is the mason jar. It makes the perfect container to store dry goods, left overs, smoothies, freshly ground coffee, and for taking my lunch to work. I even use one to grow sprouts at home. I always have a few mason jars in rotation for whatever needs done.

Living with a Minimalist Kitchen – You Have to Want It

I recently was trying to help a friend pair down her kitchen utensils. She had everything one could wish for in a well appointed kitchen, but no place to put it all. Every time I would make a suggestion for her to get rid of something, she’d explain why she needed to keep this item. This went on for awhile until I realized that she didn’t want to give up any of her stuff.

Being a minimalist in the kitchen takes some adjustment. There will be moments when you say “Damn, I wish I had _____”. Eventually, those moments will become fewer and farther between, and in time, you’ll be completely adjusted to living with a minimalist kitchen.

Have you ever thought about living with less in your kitchen? I want to know!