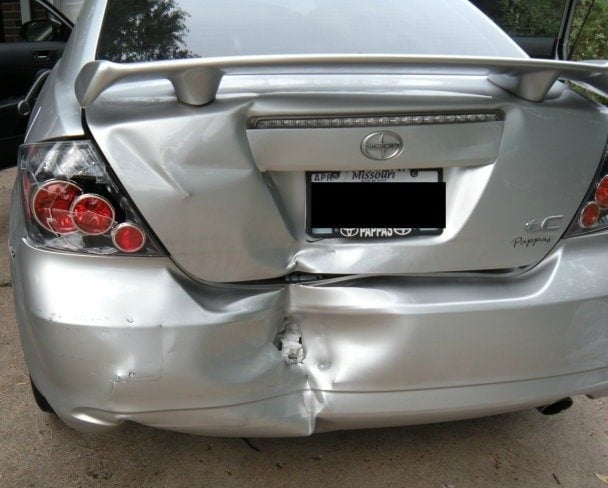 Accidents happen, and sometimes crazy people are allowed to drive for some unknown reason. I was in a pretty bad accident a little over 2 years ago, and I still cringe at the fact that I told the police that I was okay.

I lost a lot of money when I told everyone that I was okay even though none of it was my fault.

The picture to the left is of my car after the accident. It looked A LOT worse in person and there was a lot of damage to the underneath.

The crazy guy for some reason had two metal poles that he attached to the front of his car (the police said this was another reason for why he’s crazy, because he could have ruptured my gas tank and I would have died instantly if he would have hit me any harder), and that is why there is a where hole-looking dent on my car.

The accident wasn’t my fault at all (even the police told me that this guy was crazy), the person hit me on the highway when they were going 65 miles per hour and I was in a dead stop in traffic. They were driving on the right shoulder of the highway and for some reason didn’t see my car sitting there complete still, even though I hadn’t moved in over 30 minutes.

I saw him coming from behind and about had a heart attack because I could see how fast he was going and the fact that he wasn’t stopping at all.

BAM, then the guy hit the back of my car. I gripped onto my steering wheel right before it happened, and I was told that made my injuries worse because I was extremely tense when it happened.

After he hit me, my car was pushed into the ditch on the side of the highway. He was going so fast that my car was pushed yards and yards away from where I was when I was at a complete stand still. He then ran into the person in front of me as well and totaled their car.

He then drove in front of both of us and he didn’t even have the decency to check on either of us. When the police showed up, they talked to him first. I was in complete shock that we were ignored in the beginning. The guy who hit us told the police that it was ME who hit the two of them.

The police asked me for my side of the story and at first thought I was lying. I was in disbelief because obviously the only damage to my car was to the back of my car. So how could it have been my fault? There are Philadelphia personal injury lawyers that I could have used, could have gone to the hospital and so on.

Then, before I knew it, a police officer ran over to me and was laughing. All I could think about was “WHAT THE HECK IS SO FUNNY!” I had just come from an interview at a national car rental company for their corporate offices, and knew that this accident would definitely eliminate me because NO accidents were allowed whatsoever. What would be the luck that I would get into an accident as I was driving home from the interview?

I was hurt, but I’ve always been the type of person who hates dealing with any type of hassle. I feel deathly ill? I won’t go to the doctor because I’m lazy. My legs were bruised up, my neck hurt really bad because he hit me when he was driving insanely fast, my arms were in pain and I was extremely shaken up.

Have you ever been in a really bad car accident?