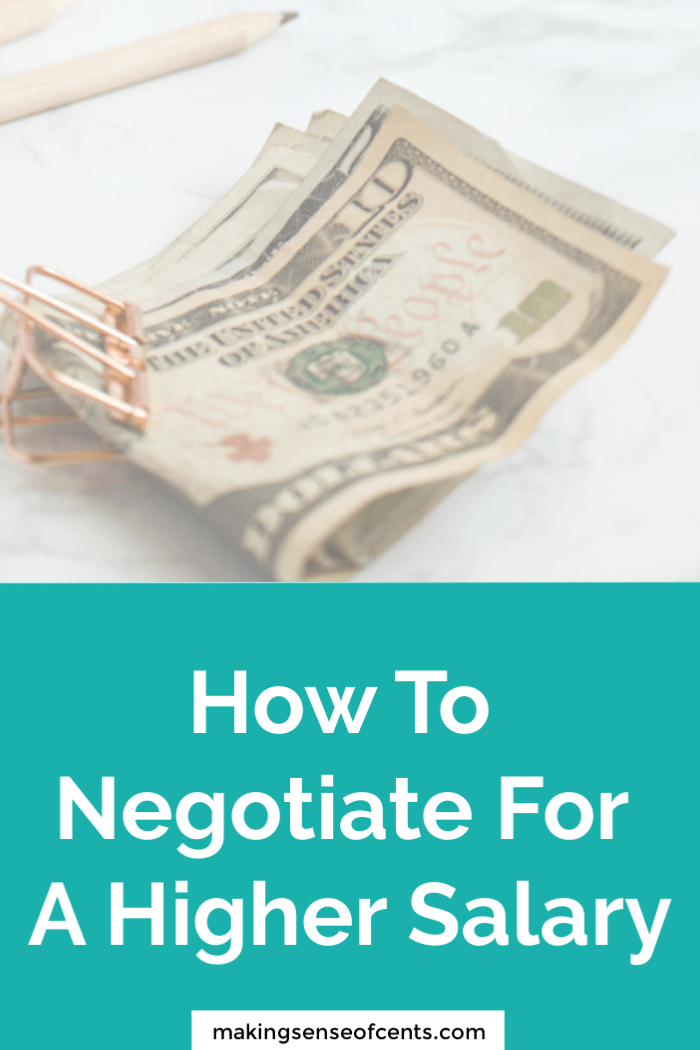 Hey everyone. Today’s post is a blast from the past. The comments were lost when I switched from Blogger to WordPress so I wanted to give this post some extra loving and re-post it for today.

I normally would not do this, but lately I have been receiving a lot of emails from a lot of you about how you all want to increase your income.

Some of you have recently moved and cannot find a well paying job, some think they are worth more (and I agree!) and some of you just plain old need more money to pay off your debts and to save faster. Anyways, that’s enough of my rambling and I’ll let the post begin.

A lot of you are graduating, looking for your first job, looking for a new job and so on. So I thought a perfect post for right now would be negotiating your salary (or asking for a raise). This is a tough and touchy subject, as it is often hard to bring up salary.

I’ve negotiated my salary a couple of times. Once I asked for a raise, but then found out I asked for too little, but she still said yes to my measly raise request. It was difficult and I was extremely nervous.

I didn’t plan at all. I woke up one day and just marched in. If I would’ve planned, I probably would’ve received something higher.

When I was applying for jobs after I graduated over 2 years ago, I also attempted to negotiate many salaries. The negotiating for the most part worked (but for some it did not). Some companies thought I was ridiculous but they were mainly companies that I wouldn’t have worked there for such a small amount.

Negotiating doesn’t hurt (as bad) if you have a plan!

This is also a topic that I need to keep in mind since I will be finished with my Finance MBA soon, and the topic of raises will be coming up at my work.

I’m the type of person who prepares for EVERYTHING. I honestly don’t think you could ever be too prepared.

1. Find your market rate.
What are you worth? Think about the skills and experience that you bring to your company, and let them know about these. Some websites such as GlassDoor give an idea about what the salary is for the position you are applying for, but they are not always correct. Factor in location, the company, responsibilities, etc. Even try asking people who have similar positions (but don’t make it awkward of course).

Also, you don’t want to say a salary range that is too low or too high, as your application will most likely just get discarded if your employer doesn’t agree and think they are just wasting their time.

You could also shop around and interview at other places. This will give you the best idea of what your salary range is if others offer you an amount. However,  I wouldn’t always recommend telling your employer that you are shopping around. This might hint to them that you would easily leave if another offer arose.

2. Analyze how the company is doing (financially, industry-wise, etc).
If the company isn’t doing the greatest, and you’re asking for a raise, this might be a bad time. However, if you absorbed a lot of other roles and are tackling many new tasks, this might give the company more of a reason to increase your salary in order to keep you.

3. Practice what you’re going to say and when you’re going to say it.
Practice makes perfect. You could role play and practice with someone else. Sounding confident and not saying words such as “umm” will reinforce that you are worth the extra money.

Make a list of your work accomplishments, goals, etc., so that everything is fresh in your mind for when your employer asks you.

Another tip is to not bombard the person who you are asking. You don’t want to make it uncomfortable. I used to work in retail, and the young employees would ask for a raise in front of customers on the actual sales floor. This made it very awkward. When asking for a raise, ask for it privately.

4. Predict what the person might say.
Don’t be hostile towards them. I would not recommend telling the person that you are going to quit immediately (or reject the job offer) if you don’t get the salary you want. I would think about it (at least for a second). Storming out of an interview or the meeting will not get you want you want.

5. Believe in yourself.
Being confident in what you’re saying is a must. If you sound unsure of yourself, then everyone will know.

If all else fails and the company cannot increase your salary, try negotiating for something that isn’t directly related to pay, such as an increase in benefits or more vacation time.

What are your tips?