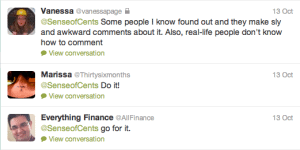 I’m sure you have all noticed, but lately I’ve been asking everyone on Twitter if I should still remain anonymous. Lately I have felt the HUGE need to tell people. I told my sister about my blog last month, and her and the boy keep telling me that I should tell people.

It also doesn’t help that the boy has told a lot of his friends and family that I blog. Luckily I have told them all to not tell anyone, so no one else really knows. They also don’t know the URL (at least I don’t think), so I am safe there as well.

I do think that I am not entirely anonymous. I talk a ton about my life, I am Facebook friends with some of you, some of you have my cell phone number, and there are pictures of me out there on my blog, Pinterest, Twitter, etc. I just try not to post anything directly on my homepage of my blog.

This is mainly for my safety. I am able to talk about whatever I want without worrying if someone will find out and that I will hurt their feelings.

I also talk a ton about money, and I go into detail with our budget, income and everything else. I wouldn’t want some weirdo to know how much money I make, especially if this is a weirdo who me and the boy know. I wouldn’t want to put anything at risk.

I last made a post on my decision to be anonymous in January.

I would like to tell my friends so that I am not so private about everything. They probably are starting to wonder why I am still so busy even though I don’t have night classes anymore also.

One of the reasons that keeps holding me back is something that my friends recently said. We were all out one night and the topic of an acquaintance’s blog came up. They were saying some not so kind things and it made me nervous to say anything. However, I’m afraid that one day they’ll find out and wonder why I hid it.

I’m definitely NOT ashamed of my blog in anyway, but I do talk about a ton of personal things here on my blog.

And there are some things that Im not sure if I would want my friends to know, as it is all too personal and still upsets me.

Another reason why I want to share my blog is because I’m also starting a second blog (a site in which my sister will help run), and she wants it to not be anonymous. My friends will easily find it if she’s not anonymous and I would rather tell them now then them finding Making Sense of Cents and questioning it.

So I guess the thing is, if I were to stop being anonymous and became public with my identity, I would have to hide certain things, such as how much money I make. Or would I not? What would you do? Keep everything the same or hide some things in order to protect yourself?

If you have posts that explain why you’re anonymous or not, please leave them below in the comments. I would love to read them!

What do you think?

Were you ever anonymous and then decided to not be so private?