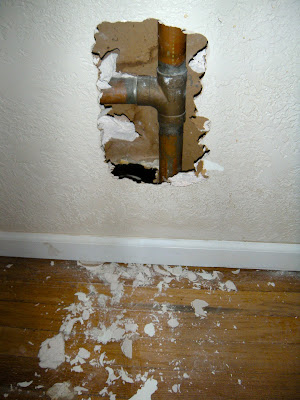 Yup, this happened last night. To everyone who follows my Twitter and saw my numerous tweets yesterday, I had a plumber come over. It did not go well.

It was supposed to cost $70. I should’ve known that it was too cheap. Then they came and said it was really bad and they would have to snake it from the roof. Yes I did not know they would have to go on the roof, I was confused at first.

Then they said to go on the roof it would cost $150. But…. It was actually going to be more.

I am completely clueless when it comes to house stuff like plumbing. So when he said he needed to bust a wall, I said sure. Yeah that was a mistake. I should have just asked him to leave after he busted the pipe when he snaked it.

Good news though, it had to be replaced eventually. And life is good when your good friend is an engineer and can figure all of this out. The plumbers wanted $450 for it (and that’s without fixing the hole in the wall), but I went to Home Depot with my bf’s friend last night (my bf was at work and can’t take phone calls when he’s working, so he didn’t even know what was going on with the plumbing disaster). We spent around $15 on piping and everything that was needed.

I will be taking him out to eat and buying him lots of beer for awhile. Not having strange men in my house is also another plus of him fixing it.

This was extremely stressful though. Hopefully we can patch the hole soon. Also, the pipe that leads to the downstairs isn’t as sturdy anymore, so we’re having a real plumber friend come over this weekend so they can check everything out.

Let me tell you, the boy was not too happy to come home to a hole in the wall… But it was a pretty easy fix. We won’t know fully how well it worked for a couple of days because all of the pipe glue has to set and dry.