To start off, you should know a little about me (I’m Bach from AdeptDebt where I write about newlywed finance) and why I choose to write a guest post on student loans. Well, I have about three times the national average in student loans and am determined to pay back the least amount possible as soon as possible!

How did I end up with $76,000 in loans?
I am not a lawyer or a doctor. Then the loans would be okay right?
I did not do anything too stupid really, I didn’t use loans to buy a car or go on spring break. My parents just made too much money for me to get any grants, and not enough to pay for my education. I got some scholarships in undergrad and a partial tuition/fee waiver in grad school and worked 30 hours a week but it but it wasn’t nearly enough to cover the costs.
I went to a flagship state school for a relatively useless (well, it did get me into grad school) social science degree, and then on to an out-of-state ($) state school for a professional degree in the field in which I now work. Grad school was a great decision, and I don’t regret the choice at all, but the combination of my educational choices has left me with about $76,000 in student loan debt, $63,000 in federal and $13,000 in private loans (study abroad in Africa).
I should mention at this point that I currently work in local government, and will likely always work in the public sector…. making me eligible for the public servant forgiveness program. At least for my $63,000 and climbing federal student loans.
Hopefully, if you have federal student loans, and if you work in the public sector or for a non-profit, you have heard about the Income Based Repayment (IBR) plan and the public servant forgiveness plan (more info here) which has been around since 2007. If not, I’ll go over the basics and you can get more information on IRB here.
Basically, if you have enough debt that your income can’t support the standard ten year plan repayment amount for your student loans (ten years for me would be about $700/month and I would pay $14,000 in interest) and work in almost any non-for profit industry doing anything full-time (teachers, local, state or federal government, or 401c3 organizations) for ten years you pay an amount based upon your income and are done. Period. The remaining debt is wiped away, and under recent legislation it looks like you won’t have to pay income tax on the amount which is forgiven (a scary thought!).

Even if you won’t qualify as a public servant for ten years to get the forgiveness, IBR is a great option to switch to if your income is low (you can always switch back to the ten year plan if your finances improve) and any remaining debt will still be wiped away after 25 years.
How does IBR work?
Under IBR, you pay 15% of your adjusted gross income (AGI- will discuss this further) over the poverty line for your family size each month. If you are married, you joint income and joint amount owed in federal loans is calculated into the equation. For my husband and I, we are able to reduce our AGI to about $52,000 a year and we have to pay about $355 a month together. See calculator below. Ouch right? But still better than $700 a month. 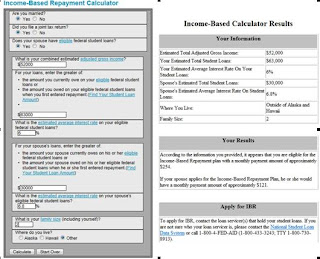 This is a big decision.
Choosing this plan over other student loan options is risky. I can’t stop working to stay home with babies, for instance, because I won’t hit ten years of employment. Losing my job or switching to a private sector job will also make switch me to either a huge monthly payment or 25 years on the IBR plan (which would suck). Also, if according to the calculator, our AGI is over $110,000, we don’t have enough debt to qualify for IBR. I think we will hit this at some point (hopefully) before the 7 years I have left are over, but there are ways to get around this too.
Scenarios:
If we make too much money (over $110,000 roughly assuming my student loans and my husband’s combined, but more if we have kiddos to enlarge our family size), the public servant ten years still counts, but I have to go to the standard, or $700+ month payment until I hit ten years.
But… It is pretty easy to lower your AGI drastically by putting money into other productive streams. There is a lot of information on the web on this, but basically you can max out on your 401k/401b/TSP plan (around $15,000 per person) and put money in things like a flex spending plan to lower your AGI. You also get to deduct $2,000 in student loan interest each year, which lowers your AGI. Anything called an above-the-line deduction will lower your AGI.
Other things to consider:
My husband is back in school working on a teaching degree. This means we still pay the total amount based upon our joint income, even though his $30,000 in loans is currently in deferment. He is still taking out loans, and will likely end up at around $40,000 total. In seven years when I manage to hit ten years of repayment as a public servant and my loans are forgiven, he will still have six years to go on his. At that point, he won’t qualify for IBR without my debt, but can switch to the regular plan and still do the public servant forgiveness himself.
If you are still in school and can reasonably expect to be a public servant, some people may actually be encouraged to take out extra loans to qualify for IBR. Especially since relative to income, the payment will be the same whether they owe $50,000 or $500,000 and the difference between what they pay over ten years and what was loaned can be banked. This is of course a gamble and not how the system is supposed to work, but should be mentioned as an unintended consequence of IBR and the forgiveness program.
As our income goes up, we will pay more each month. However, if we average $400 a month in payments over ten years for my original debt of $63,000, we will make $48,000 in total payments which is much more manageable. Is this ethical? I think so. I didn’t take out the loans not expecting to pay them back, and I have to have a graduate degree to do my job, the public sector needs good people, and I’m still paying a good portion of what I make back to the government. I do not agree with the idea that there should be a student loan bailout (something kicked around lately in the media) because student loans are manageable if you stay on top of them and work with the system.
Should universities be limited in how much they can charge? Probably. But this will not change as long as federal student loan limits keep going up and private loans are available at crappy rates and in unbelievable amounts. Higher education institutions will charge what they can get from the market, whether it is right or wrong. The important thing is that everyone considering student loans and paying student loans are as informed as possible and takes advantage of every opportunity out there.

How about you? What student loan payment plan works for you? Are you planning on making the public servant forgiveness plan work?

How much in student loans do you have?